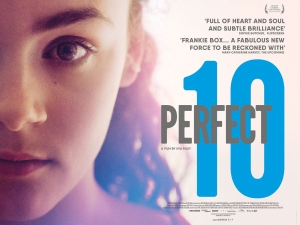 BASICALLY…: An aspiring gymnast (Box) has her world turned upside down when she meets the half-brother she never knew she had…

As this intense summer heat has us all feeling like melting popsicles, it isn’t easy to watch stuff at home unless you’ve hooked up indoor fans or air conditioning units at every available angle. I’ll admit, it made watching Perfect 10, an otherwise solid little movie, all the more difficult; there I was, stuck in a dark bedroom sweating profusely with only a small desk fan blowing wind in my direction, breathing in and out the hot air all around me, watching a movie on my laptop instead of a much cooler, air-conditioned cinema screen where it belongs (thanks, COVID).

Although my overall viewing experience wasn’t the most comfortable – perhaps next time, I should invest in a much bigger and more powerful fan to combat the heat – it didn’t ruin the overall product, because I still found Perfect 10, the feature debut of filmmaker Eva Riley, to be a sparky, self-assured and sophisticated indie that should earn Riley and some of its lead actors much more attention.

The focus of the film is on Leigh (Frankie Box, making her acting debut), a teenager living on the outskirts of Brighton, in a mostly empty house whilst her negligent father (William Ash) pots about elsewhere. She’s an aspiring gymnast, but even at practise she’s an outcast, with only her coach Gemma (Sharlene Whyte) giving her any sense of encouragement as well as the attention she craves. One day, she is shocked to see a boy named Joe (Alfie Deegan), who claims to be her half-brother, suddenly walk into her life, but after initial hesitation she finds herself warming to her long-lost half-sibling, so much so that she even starts to get involved in Joe’s gang of moped thieves.

Almost right away, you can see Riley’s shining confidence glowing from behind the camera, particularly in scenes where characters are conversing with clearly-scripted lines, but they are spoken and delivered in such a naturalistic manner that’s evenly paced and above all sharp. First-time filmmakers sometimes struggle in capturing the balance between the natural and the artificial, but Riley is able to bind both elements together easily through a swift focus on the chemistry between the lead characters as well as their easily relatable issues, without a false step in its sufficient choreography. She has such a firm grasp on the story she wants to tell, and the style in which she wants to tell it, that you all the more admire her ambition to avoid a lot of pitfalls that fellow debut filmmakers tend to fall into, among them a down-to-earth and even gritty tone that echoes the works of Andrea Arnold and Ken Loach.

Riley makes a strong case for future work with her feature, as does lead actress Frankie Box who prior to this has zero acting credits to her name, but delivers such a raw and feisty performance that you’d expect out of a far more seasoned pro. Box has the spark of a wide-eyed youth coming into her own, which brings her in line with similar other breakout roles of recent years such as Liv Hill in last year’s Jellyfish (which this film would serve as a pretty effective double-feature with), and she nails both the street-smart nature and longing desire for attention of her character, exposing not just her vulnerability but also her fiery determination to feel like she belongs in this world. She shares some really good chemistry with an equally impressive Alfie Deegan – a little too much so at times, seeing how there’s a forbidden lust sub-plot which doesn’t end up going anywhere, mercifully – and seeing how she is a real-life gymnast, she gives a strong presentation of her physical abilities whenever the film calls for it (her final demonstration is a force of nature in its own unique way).

Though it doesn’t exactly tread new ground when it comes to coming-of-age dramas about neglected teens, the combined power of both Riley and Box make Perfect 10 a real treat to behold, and should it receive enough attention could hopefully catapult the two of them into the spotlight within their respective fields. It’s confident, compelling, and completely capable of landing firmly on its own two feet – but maybe watch it with as much cool air in your viewing space as you can.

Perfect 10 is a smart, confident and sophisticated debut for filmmaker Eva Riley, who shows great comfort in her efforts behind the camera, while fellow first-timer Frankie Box shines in the lead role as a neglected teen, in a worthwhile indie that somersaults in all the right directions.

Want to decide what the movie’s like for yourself?
Check out Perfect 10 showtimes in London
via