People Just Do Nothing: Big in Japan (Review) – Kurupt FM Heads To The Big Screen 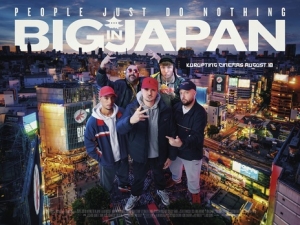 BASICALLY…: The former DJs of Kurupt FM travel to Japan for a major opportunity…

Whenever a popular British sitcom is bestowed with its own feature-length movie, it always seems to revolve around the main cast of characters going on some sort of overseas adventure, or at least far enough away from their local comfort zone. It happened with The Inbetweeners (who went abroad to both Malia and Australia), Bad Education (which ventured to Cornwall), and even the cast of Are You Being Served? wound up travelling to Spain for their big-screen outing – and now, the cycle repeats itself as People Just Do Nothing: Big in Japan takes the hit mockumentary series to the only place in the world where its clueless characters seem relatively normal by comparison.

I should point out, before we go any further, that I am not a major expert on People Just Do Nothing; I haven’t seen any prior episodes of the award-winning comedy series, and thus don’t know a whole lot about the main set-up or its characters, outside of what I am given in this film. That being said, a film like this should try to be entertaining to complete newcomers such as myself, instead of just filling it with references that only hardcore fans will pick up on, so I am looking at this film not exactly as an adaptation, but a standalone comedy that extends its appeal to outside its locked-in fanbase.

Does it work in that regard? Just about; it’s good for a few decent chuckles, but never becomes laugh-out-loud funny, settling for a pretty standard look at fame in the music industry that’ll be familiar to even those who do find it funnier than I did.

The story is set a few years after pirate radio station Kurupt FM goes off the air, and its passionate but ultimately talentless DJs – ringleader MC Grindah (Allan Mustafa), second-in-command DJ Beats (Hugo Chegwin), dim-witted druggie Steves (Steve Stamp) and mostly silent fourth member Decoy (Dan Sylvester Woolford) – have taken up different jobs in Essex, from a postman to working at a bowling alley. However, their ambitious manager Chabuddy G (Asim Chaudhry) returns with some exciting news: one of their songs has become incredibly popular in Japan after it is featured on a well-known TV game show, and soon they are all headed towards Tokyo to cash in on their unexpected fame. However, the Japanese bigwigs have very different ideas for how Kurupt FM should be thrust upon the world, and soon the group finds itself torn apart by inflated egos, ousted managers, embarrassing costumes, and a name change that makes them sound like a paedophile ring.

Like the numerous internationally-based sitcom adaptations of the past, People Just Do Nothing: Big in Japan works in its inevitable fish-out-of-water humour as much as it can (the gang tries authentic Japanese meals, only to settle for McDonald’s instead, and a running gag sees them removing their shoes in places where it isn’t necessary). Some of it works, some of it doesn’t, but here there is an admirable ambition on behalf of the performers to make it work as naturally as possible, all under the mockumentary format with awkward glances towards the camera and frequent interview segments. The actors are all clearly immersed in their characters, to a point where you do respect their utter dedication to the material which is often more amusing than it is hilarious, and doesn’t always take advantage of some of the funnier set-ups. Case in point, Grindah’s Instagram-obsessed wife Miche (Lily Brazier) originally cannot fly out to Japan with the boys, so in fear of being humiliated online she creates a makeshift Japan in her friend’s living room, solely for her online followers to see; that could have been a very funny side-plot that the movie would cut back to every now and then, but the hopes are dashed when she shows up in Japan anyway and more or less stays in the background for the rest of the film.

For a film based on a show that had a fair amount to say about the misplaced ambitions of working-class wannabe musicians like the DJs at Kurupt FM, there is surprisingly little point it wants to make about the much higher levels of musical stardom. It follows a rags-to-riches story that you have seen plenty of times before, especially in films about underdogs who achieve a certain level of fame and what it ends up doing to them, and because of that you do know the ultimate lessons that these characters will learn by the end. With it being set in Japan, one of the most flamboyant and energetic media capitals of the world, you would also expect to see a bit more craziness with how insane some of the TV shows and commercials can be, but it plays things relatively safe throughout, never getting any more ridiculous than outfits straight off of The Beatles’ infamous cover art for their Sgt. Pepper’s Lonely Hearts Club Band album, and stage costumes with giant heads of the main cast.

The casual viewer might not get as much out of this film as someone who’s much more familiar with the world of People Just Do Nothing, but it’s not a bad movie overall. Like I said, it’s good for a few decent chuckles, the actors are really trying, and there’s even a few nice heartfelt moments throughout, but People Just Do Nothing: Big in Japan probably isn’t going to win over any new converts any time soon.

People Just Do Nothing: Big in Japan isn’t as ambitious or even as funny as it possibly thinks it is, but it’s a fine if unspectacular sitcom adaptation that gets a few decent laughs every now and then, features some dedicated performances, and even has a little heart to make it just about worthwhile.

People Just Do Nothing: Big in Japan is now showing in cinemas nationwide – click here to find a screening near you!