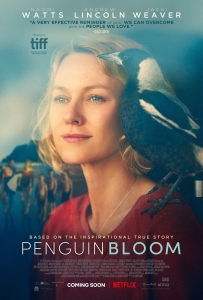 BASICALLY…: A family, torn apart by a tragic accident, learn to love and hope again when they take in an injured magpie…

As we all continue to wait out this seemingly never-ending pandemic, many of us are trying to take whatever happiness and joy we can get, and use that to help us get through the long, cold days stuck indoors. That can include anything from taking up painting to developing new hobbies, all the way to watching movies at home via the numerous streaming services available.

The latest movie hoping to liven our spirits is the sweet, based-on-truth Australian drama Penguin Bloom, debuting this week on Netflix in most countries outside its own, and as a gentle feel-good movie there are some decent things to admire about it – that is, if you’re willing to overlook some of its cornier and more formulaic tendencies which don’t ruin the film per se, but also don’t make it anything to write home about either.

The focus of the film is on the Bloom family, an Australian clan who appear to lead healthy and happy lives – until, after an accident whilst on holiday in Thailand, mother Sam (Naomi Watts) is left paralysed from the waist down, putting her in a state of depression that’s hard for father Cam (Andrew Lincoln), their three young sons, or even Sam’s doting mother Jan (Jacki Weaver) to bring her out of. It’s not until eldest son Noah (Griffin Murray-Johnston) rescues an injured magpie, which they name Penguin for its black-and-white features, that Sam is inspired to stop feeling so sorry for herself and regain her happiness along with the rest of the family.

Although it’s based on a real family who actually did go through these things, director Glendyn Ivin’s film has a tinge of overly sentimental fiction about it, kind of like Free Willy but with an adorable little bird (and an exceptionally well-trained bird, at that) instead of an adorable not-so-little whale. The script, written by Shaun Grant and Harry Cripps, opts for family-friendly tears over any deeper emotional turmoil, which is to be expected for a film whose target audience clearly extends to all members of the family – children can enjoy the silly antics that this bird gets into, while adults can absorb the heavier drama surrounding this family – but it still softens the impact slightly due to its surface-level handling of themes like depression and guilt. It’s difficult to imagine if a more emotionally complex script would have necessarily fixed its Hallmark Channel-esque sentimentality, or if it would have even resulted in a slightly better movie overall, but for what we’re given it’s clear to see how this material might not have inspired the writers to utilise their full creative potential in telling this sensitive family story.

While it’s certainly corny in a lot of places, and goes in just about every direction you’d think a movie like this could go (including unnecessary dream sequences which are straight out of a surreal student film reel), there’s no denying that there is a lot of heart to this film. The titular bird, as previously mentioned, is both cute and a very good bird actor, and the ways in which the characters interact with it are nearly impossible to resist, as these actors deliver gentle and touching performances that compliment the turn given by the winged one, including Naomi Watts who is almost always reliable in just about everything (although, having also seen The Impossible, this is hardly the worst thing to happen to one of her characters during a holiday in Thailand). Ignoring that student film jab from earlier, it is also a well-made movie, with some gorgeous cinematography capturing the sunny beaches of this northern Australian environment, and some decently paced direction by Ivin which allows for a few stand-out character moments (you’ll be beaming as Watts and kayaking instructor Gaye, played by Rachel House, sing along to Radiohead’s “Creep” while relaxing in the shallow sea).

It’s a movie that definitely has its heart in the right place, and will certainly be an attractive movie to put on for the whole family, but don’t expect Penguin Bloom to be a new breakout hit among this human-animal friendship drama sub-genre. It’s more or less just another one of those films, but while it’s not unique enough to really stand out, it’s nowhere near truly terrible to ignore either. Either way, feel free to make up your own mind if, like many others right now, you’ll take whatever happiness you can get.

Penguin Bloom is a sweet family drama that clearly has a lot of heart to spare, although its formulaic and overly sentimental approach to its real-life subject doesn’t make it a truly unique standout in the sub-genre of human and animal friendship movies.