PAW Patrol: The Movie (Review) – Make Sure You’ve Got Kids With You 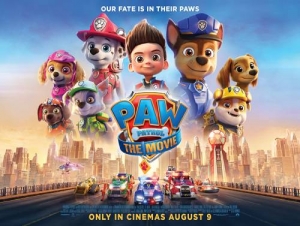 BASICALLY…: A group of heroic puppies must save the city from danger…

Going into a cinema early on a Monday morning and purchasing a single ticket for PAW Patrol: The Movie is a hilariously awkward experience. Needless to say, there were a few suspicious looks in my direction as I, an overweight and clearly childless man, wandered willingly into a screen that was otherwise packed with countless screaming children and their exhausted parents; imagine Jimmy Saville entering a school disco, and you pretty much have the kind of vibes I was giving off just by being there.

Obviously, I served no threat to anyone of any age, but the mere idea of a grown man seeing PAW Patrol: The Movie by himself at an early Monday morning screening does put you on edge, whether or not they mean any harm whatsoever. It was a humorous enough experience to help get me through the actual movie, which is strictly one for its young target audience in addition to serving as mild and utterly harmless entertainment for any accompanying adults.

The film, like the show, focuses on the titular PAW Patrol, a squadron of young puppies who help the residents of Adventure Bay with their human leader Ryder (voiced by Will Brisbin). They are soon called to the neighbouring Adventure City where their archenemy, Mayor Humdinger (Ron Pardo), has somehow gotten himself elected as the city’s new leader, and has already put into motion a number of dangerous changes, from a loop-de-loop transportation system to erecting a skyscraper as big as his ego. Ryder and the pups team up with city-smart puppy Liberty (Marsai Martin) for their mission, which also finds police pup Chase (Iain Armitage) confronting his own past connection to the city.

I should mention that, despite some of the voice talent listed above, most of the voices are dubbed with British actors replacing the American ones (I couldn’t figure out who exactly voices who in the UK dub, since many of the listed talent over the years tends to come and go). It does make sense to do this, because young PAW Patrol viewers here in Britain will only know the locally-dubbed voices coming out of these characters, so to hear them suddenly speak in American accents like the initial advertising suggested would have been very confusing to them. The dubbing is largely reserved for the familiar characters including the main group of pups, Ryder and their nemesis Humdinger; elsewhere, you get to hear plenty of other familiar US cameos from the likes of Tyler Perry, Jimmy Kimmel, Dax Shepherd and even Kim Kardashian playing minor supporting characters, as well as Black-ish breakout Marsai Martin in the significant co-lead role of Liberty.

Whoever ends up voicing whom in whichever version of PAW Patrol: The Movie you end up watching, it’s a film that will undoubtedly appeal to children, but might leave older viewers a little confused. As someone who’s only ever watched the show fleetingly – and even then, only while looking after a young child – there was a lot of stuff I found about this universe very strange: this appears to be a world where dogs can not only talk (though other animals, like the villain’s cats, remain silent throughout), but can be fully understood by humans who talk to them like they’re just any random person on the street. Also, even in a post-Trump world, it’s still a little hard to believe that someone with frighteningly zero competence as Humdinger can suddenly acquire power and implement major changes to an entire city virtually overnight (and I know it’s dumb to nit-pick a movie like this, but there’s honestly little else I can talk about), which makes me think that this is a problem that will ultimately fix itself, even without the help of PAW Patrol.

There are some admirable things about this movie; the animation is quite good, and aside from it being an obvious step-up from the low-budget CG on the show, there are some shots in this which are honestly quite gorgeous to look at. In another bold venture, the film also spends some time focusing on a main character’s developing PTSD after a rescue mission doesn’t go entirely to plan; never did I think that in writing a review for PAW Patrol: The Movie, I’d have to use the phrase “PTSD” when describing a major character arc, but the movie portrays it nobly and with a decent amount of compassion and sincerity.

While it’s not quite the cynical cash-grab some might have been expecting – and in terms of recent animated movie spin-offs featuring the voice of Marsai Martin, it has more of a reason for existing than Spirit Untamed – PAW Patrol: The Movie does have some nice little elements to keep the very young kids entertained. Anyone else over a certain age, though, might want to a) bring their iPad, and b) make sure they’re not seeing it without any kids in their care, otherwise you’re in for a lot of dirty looks headed your way.

PAW Patrol: The Movie is entertaining enough for very young children to enjoy, though most older viewers may find themselves not quite as invested, despite good animation and noble themes.

PAW Patrol: The Movie is now showing in cinemas nationwide – click here to find a screening near you!