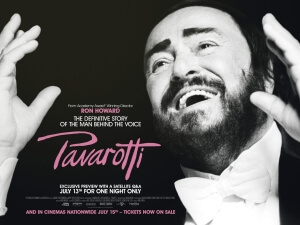 BASICALLY…: An in-depth look at the life and career of celebrated opera legend Luciano Pavarotti…

He was, and in a way still is, the beating heart and soul of opera, but the life that Luciano Pavarotti led was something of a theatrical experience in and of itself, full of emotional highs and lows as well as unexpected twists and tragic turns. Director Ron Howard – this being his third music documentary, following Jay-Z doc Made in America and The Beatles: Eight Days a Week: The Touring Years – attempts to tell his extraordinary life through archive footage, interviews with friends and family, and a gorgeous collection of opera music from all walks of life, succeeding in giving us an entertaining look at such a larger-than-life figure, but not so much in finding many other angles to look at him from, other than ones which seem to praise him unconditionally.

Covering nearly everything from the start of his musical career to his unlikely mega-stardom across the world of music to eventually his death in 2007 from pancreatic cancer, the aptly-titled Pavarotti is more of a celebration of his lifelong achievements rather than a full examination of everything that made the man tick. For the most part, it’s a fair trade as Howard blends footage and interviews together in such an engaging way that anyone who’s not all that familiar with Pavarotti’s life and work can watch and appreciate everything he did as they learn more about him. Throughout the film, we see Pavarotti be this extremely charismatic figure that goes out of his way to be the best possible entertainer that people can hope for, with the opening scene being footage from his trip to the Amazon where he travels to an all-but-abandoned theatre and performs a number for the locals, and later on we hear from concert promoter and interviewee Harvey Goldsmith recounting how, after a show when Goldsmith brought his parents backstage to meet him, he sent everyone else out so he could perform a private rendition of “Ave Maria” for them.

It’s things like that which Howard’s film more or less tends to focus on, with any real criticisms as well as many of Pavarotti’s more concerning personality traits – such as his marital affairs with female soprano Madelyn Renée and, more scandalously (at least in Italy), his assistant Nicoletta Mantovani who was more than three decades his junior – either being largely swept under the rug or given an easy pass. Because of that, it probably won’t be the warts-and-all biographical film that some people might be expecting, and certainly not one that offers more than one dimension to the central figure. This movie is perhaps a bit too kind to its subject matter, as left and right it is ready to praise his talents, his generosity, and his way with people without daring to say a negative thing about him – like I said, very briefly will it bring up how he could sometimes be difficult to work with, but it moves itself along as quickly as it was brought up – that it starts to feel a little like a propaganda film that’s selling the world a dictator. Thankfully, the movie doesn’t contain any harmful messages nor does it promote any ill-advised agendas (not that I’m aware of, anyway), except to show the good nature of a man with talent and charm to spare, and whose charitable contributions to the world more than outweighed his personal flaws.

While the movie can seem all too praising of Pavarotti sometimes, it still does a fine job at telling his story for anyone who might not know much about the man outside of his spectacular voice. We see that he was a loving husband and father, even going so far as to cancelling tour dates so he could be by his daughter’s side when she was diagnosed with a serious illness, and used his musical connections wisely when he was recruiting for his benefit concert series Pavarotti & Friends; U2 frontman Bono recalls how Pavarotti managed to actually get through to him via his Italian housekeeper, while Princess Diana is shown to be very moved by one of his performances, so much so that the two became close friends afterwards. It’s easy to understand why so many people were so drawn to his vibrant and lively persona, as he is shown to be someone who clearly knows how to play the publicity game and charm the pants off of anyone who’s interviewing him or even listening to him speak. If he was still alive today, I’d bet that he’d be even more lovable as an old man, with so many stories to tell about his life with that admirable amount of energy he seems to have always had when he was around.

Then, of course, there’s the reason why he was so revered in the first place. His voice was truly unlike anything that the world of opera had ever heard or will ever hear again, and it’s interesting whenever the film gets into his technique for ensuring his voice lasts as long as the notes on the music sheet, which should be good practise for anyone seeking a career as a tenor. The most spine-tingling moment comes when Pavarotti, on-stage with fellow tenors Plácido Domingo and José Carreras – with whom he had formed opera music group The Three Tenors, the closest that the world of opera came to the likes of Queen or even The Beatles in terms of popularity – sings that most beautiful of arias “Nessun Dorma”; the piece is already a breathtakingly stunning work of art, but to hear it sung by a man whose singing voice was biologically designed to deliver a pitch-perfect rendition of it, it’s something that really blows you away.

Howard might let his clear adoration for the man get in the way of telling a full-rounded version of his life story, but in moments like that there is no doubt that he, like Pavarotti himself, knows how to give the people what they want.

Pavarotti is an entertaining documentary that charters the exceptional life and career of opera legend Luciano Pavarotti, but while it may sometimes seem a little too forgiving of its central figure, director Ron Howard remembers to inject several crowd-pleasing reminders of his talent, good nature and larger-than-life persona to keep things in balance.

Check out Pavarotti showtimes in London
on Walloh.