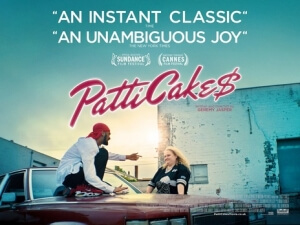 BASICALLY…: A plus-sized white girl (Macdonald) attempts to cope with her less-than-stellar life by pursuing a career as a successful rapper…

Originality is not the strongest suit of Patti Cake$ (and yes, that IS how the title should be spelt), I shall say right now. It follows very closely the same kind of template you’ve seen in many other movies about an aspiring rapper/singer/dancer etc from a rough background who against all expectations succeeds on a personal level, like 8 Mile, Hustle and Flow, Saturday Night Fever, Flashdance and several others. In doing so, this movie is very easy to pinpoint from the very first scene, leaving you not exactly guessing where it’s all going to end up by the end of the movie.

However, it has enough charm and sincerity to coast on through the majority of it, so even though you’ve seen this kind of movie many times over, it’s still entertaining because you’re enjoying the ride, up to a point.

In this situation, the aspiring artist is Patricia Dumbrowski (Danielle Macdonald), a plus-size white girl from New Jersey who struggles to keep things afloat with a bartending job in a lowly bar, and even more so when she’s not only looking after her frail and wheelchair-bound grandmother (Cathy Moriarty), but also her alcoholic and immature mother (Bridget Everett), a former singer before being shunned by the industry. Patricia spends her free time coming up with fresh rap verses alongside her friend Jheri (Siddharth Dhananja), and soon finds herself being given the opportunity to record some songs with Jheri, her grandmother, and socially awkward musician Basterd who believes himself to be the Antichrist (Mamoudou Athie), thus sending her on a mini-journey of self-proclaimed notoriety and some seriously sick rhymes.

So yeah, it’s exactly the same type of underdog story we and our future brethren are more than familiar with, but there are certain strengths to this film that keep it moving forward. One of them is Macdonald, in a breakout role that will surely see the 26-year-old Australian actress receive a lot more attention, and who easily carries the movie with a firm and commanding lead performance, which even when it falls neatly into convention never feels like it’s manufactured or phoney. Her natural charisma gives the film a breath of freshness to its otherwise stale template, which helps the audience get behind this hero as she pursues her dream.

Macdonald’s charming performance is the main shining beacon in a film that is otherwise rather ugly to look at; there are lots of tight close-ups on some very unappealing faces, some of the shots and camera work can be somewhat disorienting, and the colour scheme feels off with its mixture of some unpleasant blobs on the pallet. Maybe it was the intention of debut writer-director Geremy Jasper to make a film that looked rather unappealing, to counterbalance the overall message of finding beauty in the most ghastly of environments, but that still means having to watch a visually unsavoury movie which outside of a few shining spots is just following the same template you’ve seen many times before.

It is by no means a bad movie; it’s just very standard and safe. You know exactly where certain situations are going to go and which paths certain characters are eventually going to be led down, right from their initial introduction or a little bit further down the road when they become a bit more obvious. There’s no faulting the formula, because it has proven time and time again to be a crowd-pleasing template, and in this case it’s easy to see why some audiences would feel uplifted by this story, but it is a formula nonetheless and one that many filmmakers have and will continue to use to tell their stories of ordinary people achieving the impossible whilst in search of their dreams.

I did want to like it more than I did, and there is plenty to like, from Macdonald’s excessively great performance to some of the in-film rap verses which are fun to watch be performed either into a microphone or live to an audience, but in the end Patti Cake$ just doesn’t differentiate itself enough to stand out. It’s fine as a one-off, but don’t be surprised if you end up forgetting about it not long afterwards.

Patti Cake$ is a serviceable if overwhelmingly familiar movie that thrives on its central breakthrough performance by Danielle Macdonald, but doesn’t set itself apart enough from the many other films like it to properly stand out.