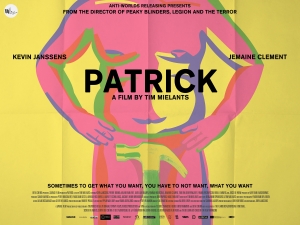 BASICALLY…: A handyman (Janssens) sets out to retrieve his stolen hammer, only to face deep mysteries about his own identity…

I honestly don’t think I can recall there being so many penises just flapping about in the open during a movie, but then again 2020 has been such a strange year that anything is now within the realm of possibility.

The male anatomy makes numerous appearances in director Tim Mielants’ Patrick – don’t worry, there’s a good enough reason why that’s so – and only adds to the offbeat quirkiness of this oddly compelling mystery/character study, where the real dicks aren’t necessarily found around the groin region.

The reason we get to see so much nudity here is because much of it takes places in a nudist community; our hero is the titular Patrick (Kevin Janssens), a socially awkward 38-year-old handyman in the colony who is also the son of the site’s ailing owner (Josse De Pauw) and his blind mother (Katelijne Damen). After his father suddenly passes away, Patrick is suddenly expected to take over ownership of the site – but Patrick is far more concerned with the fact that his prized hammer, part of a discontinued collection, has suddenly gone missing, and he begins an obsessive search for the person who has taken it, revealing some troubling secrets about certain members of his community along the way, from ambitious manager Herman (Pierre Bokma) and his adulterous wife Liliane (Ariane Van Vliet), to arrogant musician Dustin (Jemaine Clement) who’s come to stay for a short period.

The film is a highly unusual meditation on the grief process, with the stolen hammer obviously serving as a coping mechanism for the main character to channel his emotions in the wake of his enormous loss, and his strange fixation on a seemingly unimportant item rightfully causes numerous people to grow concerned over his misplaced priorities. It is never explicitly stated that Patrick has Asperger’s Syndrome or even any form of autism, but his mannerisms and certainly his stunted emotional range – all portrayed gracefully by a largely unrecognisable Kevin Janssens, who bravely spends most of the movie with his member hanging out and proud – at the very least hint at there being some sort of learning disability that is causing him to lack any true grievances which any other person would experience during this situation. It lends an interesting angle to both the mystery thriller and the darkly comic exploration of the human condition, because you’re both oddly compelled by the character’s obsession to find and reclaim his hammer, and you manage to feel sympathy for someone who apparently does not know how to share it himself, all while trying to pierce your way into his closed-off mind to discover more for yourself.

Mielants, who makes his feature directing debut here after working on numerous TV series (most notably Peaky Blinders), brings a smooth style that accurately represents the proper tone and mood each scene is going for; for instance, an inquisitive one-shot sequence set during a community meeting with a character staring in through the window plays around with audio frequency as it muffles when the outside character is peering in before rescinding to full volume when he disappears behind the walls. It’s both suspenseful and very well-shot, with the cinematography lending a somewhat eerie feel as though at any moment characters are going to snap and do something incredibly violent, which given the increasingly hostile treatment Patrick receives by others throughout the film wouldn’t be too far out of the question. It can also be a rather funny movie, albeit with a dark sense of humour, with Patrick’s flippantness surrounding his father’s death in lieu of his search for the hammer leading to a couple of coldly amusing moments, and also perhaps the greatest caravan fight since Kill Bill Vol. 2. Whatever the tone, Mielants is able to set the right mood through his filmmaking, whether it’s with subtle, refreshingly unshowy style, or focusing in on the mental analysis of the lead character’s increasingly bizarre grieving process.

Though it comes in at just over the standard hour-and-a-half runtime, there are parts of the movie and even certain characters which could have easily been cut out without many major alterations to the overall story. As amusing as Jemaine Clement is in the movie, his character is largely pointless, and only feels like it’s there just so Clement can just be himself without having to do much else (as the only recognisable actor in the movie, though, he’s certainly happy to just be there). There are also certain reveals about some supporting players which, again, don’t add much to the main story either, leading me to think that if perhaps there was some slight trimming then this would have been a fairly solid 70 or 75-minute movie, further adding to the overall quirkiness of the film.

While it’s not a completely solid movie, Patrick is still at the very least an intriguing one; it does constantly leave you with an overwhelming curiosity about where it’s eventually going to end up, and you’re interested enough in both the film’s style and its unique approach to the grieving process to keep with it until it finally does reveal its endgame. Plus, there’s enough penises on display to satisfy your morbid fascination with the male anatomy.

Patrick is an oddly intriguing film which mixes quirky dark humour with a compelling and unique approach to the grieving process, with stylish filmmaking and amusing performances lending the slightly flabby script a sense of eccentric life that’ll leave you morbidly curious as to where it’s all leading.

Patrick is now available on demand.