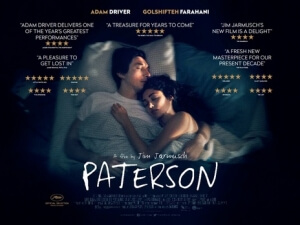 BASICALLY…: A bus driver (Driver) aspires to be a poet, while also living a quiet existence with his wife (Farahani) in their small town…

Jim Jarmusch’s Paterson is a strange beast to experience. It’s the kind of film where you go through several emotions all at once, from curiosity to boredom to frustration to fascination in one fell swoop. Yet, none of these unexpected emotions really make it feel like you’re watching something bad, or at the very least unbalanced; all throughout, you feel like you’re watching something that is genuinely different from the set standard, and for that you are grateful for the fresh change of pace. It somehow goes against everything that a film should be, yet it sticks in your mind long after you see it, more than a good majority of the many other standard films you may have seen this year.

Honestly, for that reason, it is hard to truly describe something like Paterson other than it is truly unlike any other film out there at the moment.

The story, or what story there is, is about a man named Paterson (Adam Driver), who works as a bus driver in his hometown of Paterson, New Jersey (and that’s not a mistake on our part; the character also coincidentally shares the same name). We follow him through a normal, uneventful week in his life, which follows an eerily similar routine of waking up next to his wife Laura (Golshifteh Farahani), walking to work, driving around the town while listening to the conversations of his passengers, walking his wife’s pet English bulldog in the evening, and sitting down for a glass of beer in a local bar. In his spare time, he is constantly writing down new poems in a notebook, which he is anxious to share with his eager wife, who herself spends her time decorating the house, making various cupcakes for the Farmer’s Market, and beginning to learn the guitar.

And, seriously, that’s all there is when it comes to a plot. Some other events happen here and there, but to say they are minor and mostly without incident is an understatement. For the most part, this is a film that has almost nothing in terms of a cohesive story, instead substituting several vignettes throughout this one week of Paterson interacting with the locals, and quietly going about his day. That’s about it.

Allow me to take you through the several stages of watching this film for the first time. First, I was intrigued by the slow-burn pace that this movie was adopting, and even though nothing out of the ordinary was happening (aside from a strange recurring motif of twins popping up every now and then, following a dream his wife has of having twin babies) I was still morbidly curious about where this was all leading to. Then, about one-third of the way through, it suddenly dawned on me that this was going to be the whole film, and that I was stuck watching something with no plot or any kind of structure to stick it together, leaving me without anything to say about it. Then, when it finally did end with nothing truly noteworthy happening as a denouement (outside of one or two minor developments, of course), I felt frustrated that I had just sat through what could have possibly been the most boring film I’ve seen in ages, one where absolutely nothing happened. But finally, I reached the car to drive home and I suddenly couldn’t stop thinking about it. In my mind, I was thinking about the life that Paterson and Laura were living, how it was a marriage that was fuelled fully by unconditional love and a mutual support of one another. I found myself thinking back to the several random people that Paterson came across during the film, from an overdramatic actor pining over a break-up to two students discussing capital punishment in Italy during the early 20th century (who were, in a lovely surprise reunion, played by Jared Gilman and Kara Hayward, the young lovers from Wes Anderson’s adorable Moonrise Kingdom). I could not stop imagining where their story goes from there, even if nothing continues to happen as it did throughout that 113-minute running time.

No other film this year, for me anyway, has managed to make me feel all these conflicting emotions, yet afterwards feel so enamoured by how calm and uneventful it was. It really made me want to revisit this film almost instantly, just so I could spend a little more time following this simple, quiet man around the town, writing more poetry and interacting with several people who never felt like characters, but just pure people.

All of a sudden, a film that I really didn’t know what to think of became a film that I absolutely loved. It challenges the audience to look at the simple life of an un-extraordinary man without confiding to a typical three-act structure with character arcs to be rounded up before the credits start to roll. Luckily, it’s paced so swiftly by Jarmusch with sweet, steady camerawork that allows us to absorb the small-town qualities that Paterson, New Jersey has to offer, and a collected and non-showy lead performance by Driver who is quite astonishing in how much he holds back without delivering any big emotional outbursts, which perhaps a lesser film would have done.

I wouldn’t say it’s for everyone, because its slow-burn pace and lack of cohesive plot is bound to put off more people than intrigue them, but for whoever ends up going through the same patterns of emotional conflict as I did, in a film where next to nothing happens, Paterson will be an unexpected delight and, for me anyway, one of the best films of the year.

Paterson may not have much in terms of a cohesive story, but you end up feeling enamoured by its quiet simplicity long after you finish watching it, enough to want to go back and revisit what has to be one of the most unique films of the year, and certainly one of the best.