Passing (Review) – A Black-And-White Tale Of Black And White 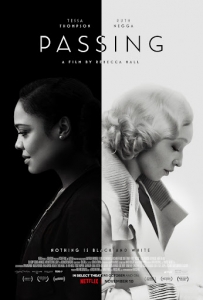 BASICALLY…: In the 1920s, two mixed-race childhood friends (Thompson and Negga) enter dangerous territory when one of them “passes” as white…

A story like the one in Passing is one that you’d think would have originated in the 21st century, but amazingly the Nella Larson novel on which writer-director Rebecca Hall’s debut feature is based was actually first published in 1929. It’s a rather fascinating factoid given the taboo-for-its-time content, which honestly makes it more surprising that it hasn’t become a more infamous piece of American literature.

Hall, though, manages to translate the powerful story into a gentle, but no less surprising, feature that plays its hand slowly and carefully, sometimes to its detriment, and gives it a jolt of quiet power in modern times.

Shot in black-and-white, Passing takes place in 1920s New York, where a mixed-raced woman named Irene (Tessa Thompson) happens to run into her childhood friend Clare (Ruth Negga), whose lighter skin enables her to “pass” as a white woman. Because of this, Clare has been able to acquire an affluent lifestyle thanks to her rich husband Jack (Alexander Skarsgård) – the downside, though, is that he’s horribly racist, unafraid to show his pure hatred for Black people, which makes both women uncomfortable given the irony of the situation. Irene, meanwhile, is more embracing of her Black identity, living with her doctor husband Brian (André Holland) and two young sons in Harlem, and soon she finds herself drawn into scrutinous and even dangerous circumstances as she and Clare become more and more reacquainted.

The first thing you’ll notice that’s quite striking about Passing is its sharp use of black-and-white cinematography, courtesy of DP Eduard Grau. The decision serves as a powerful storytelling device in this case, for it lets the audience see what the world in the film sees which is a pair of women who, at first glance, you may not even be able to tell are dark-skinned at all, but it also works as a visual metaphor for these characters are passing as more than just their skin colour; there are those who “pass” as having happy and problem-free marriages, and other who even “pass” as a different sexuality altogether. Grau’s cinematography is thus ironic since there is obviously a lot more going on underneath the surface that isn’t just, erm, black-and-white, and the stark and often striking use of such colourless imagery – along with a boxed-in aspect ratio – makes it seem like its own character in this story.

There is something classical (to a point) about Hall’s direction, something which again the black-and-white cinematography helps to create the illusion of. The first-time filmmaker is clearly a visual storyteller, allowing the vast majority of her scenes getting their points across with pure mood and performance over most of her dialogue, which does work because you do feel as uneasy in scenes where both women are forced to laugh along at racist language, and because leads Tessa Thompson and Ruth Negga are very good at conveying their respective characters’ uncomfortableness and occasionally fits of jealousy and melancholy. Hall’s overall approach is delicate, with outbursts of social issues threatening to smash the porcelain exterior and create all kinds of chaos, with a tone that can get surprisingly intense sometimes. You can tell that she has gained a lot of experience from several projects as an actress, including films like Christine and The Gift (the latter also lensed by Grau), which like Passing also dive into heavy and difficult topics without leaning too hard into them.

However, while Hall’s film is a visually striking and aesthetically handsome piece of work, Passing can’t help but feel perhaps a bit too light on the touch. A story like this with its strong historical themes and a sharp commentary on the racism of the 1920s needs a more forceful direction, and although Hall is certainly up to the task when it comes to the powerful subtlety of the piece, the heavier moments feel somewhat constrained by the light, breezy pace that Hall has established. A climactic sequence contains some shocking material, which requires brutish force and maybe some ambiguity, but the impact is softer than anticipated because while the dramatic tension is certainly there, the overall build-up is noticeably muted, and leaves things on a slightly anti-climactic note.

Though it isn’t as powerful as it clearly sets out to be, though, Passing is at the very least an impressive first feature from a performer who shows great promise behind the camera. Hall is already a more-than-capable actress – her turn in this year’s little-seen horror The Night House is proof of that – but she also has a clear voice when it comes to making her own projects; it’s a voice that certainly needs a little work, but so far it’s shaping up to be something special in the future.

Passing is a mostly pleasing first feature from writer-director Rebecca Hall, who employs some striking black-and-white cinematography and two impressive turns by leads Tessa Thompson and Ruth Negga to deliver a quiet and delicate account of 1920s America, though its more powerful moments leave less of an impact due to its all-too-light approach.

Passing will be available on Netflix from Wednesday 10th November 2021.