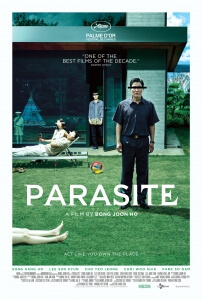 BASICALLY…: An impoverished family slowly integrate themselves into the lives of a much wealthier family…

It’s not every day that a Palme D’Or winner meddles its way into the public consciousness, much like how the characters in this movie meddle their way into other peoples’ lives. But then again, it isn’t every day that a movie like Parasite comes along, one that contains such eye-opening commentary about the class divide that it transcends its pitch-black comedy and becomes startlingly relevant in an ever-changing world.

Yes, the movie is as good as you’ve probably heard by now. Although I wouldn’t say that I fell in love it with like many other critics have done, I can still highly respect the craft, sophistication and balls-to-the-wall ambition that this movie offers, which makes it a very entertaining and insightful film to watch.

The feature, directed and co-written by Bong Joon-ho, centres around the impoverished Kim family, who live in a dingy basement apartment in South Korea and perform mundane tasks like folding pizza boxes to earn their income. The son, Ki-woo (Choi Woo-shik), is encouraged to pose as a college-educated English tutor for the daughter of a much wealthier family, the Parks, and it goes well enough that Ki-woo convinces them to hire his sister Ki-jeong (Park So-dam) – without telling them that they’re related – as the younger son’s art therapist. Soon, the whole family starts working for the Parks, as father Ki-taek (Song Kang-ho) replaces their driver after framing him for devious affairs, and mother Chung-sook (Jang Hye-jin) manages to become the new housekeeper when they oust the current one using her peach allergies. At first, the Kims enjoy taking advantage of their new employers, but it’s not too long before things get out of hand.

I wouldn’t dream of going any further in describing the plot, because a lot of what follows is best seen with as fresh eyes as possible. It’s a movie that demands patience, especially with an over two-hour running time, but Joon-ho makes the whole thing feel like an easy breeze, constantly revealing something new that will make you want to go back and see how it all ties together from the start, and keeping the level of suspense fairly high throughout. Joon-ho has, in the past, proved to be a master of cinematic unpredictability – just check out The Host, Okja, or the criminally underseen Snowpiercer (wherever you can find it; thanks, Harvey) – and Parasite is no different, as you constantly have no idea what destination it is leading you towards, with sudden twists and turns suddenly throwing everything in a loop and keeping you constantly on edge. By the time it reaches a rather shocking conclusion, you’ll have enjoyed the ride so much that you’ll be eager to go on it again afterwards.

It’s well-paced, well-acted by a strong ensemble, smart in its ideas and executions, and legitimately suspenseful. Most of all, though, I’m just glad that a film by Bong Joon-ho is getting such wide exposure, after his last few films either got very limited releases, went straight to Netflix, or in the case of Snowpiercer weren’t released at all in the UK. Those films certainly found their audiences through strong word of mouth, but Parasite marks the first time that one of his movies has entered the public consciousness in such a profound manner; currently, it is in the same conversation as award contenders like The Irishman and Once Upon A Time In Hollywood, much like how fellow foreign-language film Roma was the talk of Tinseltown during last year’s awards season, which is rare for any international production to achieve (let alone one from South Korea). People are responding so much to it that Joon-ho is quickly becoming an established name in international cinema, similar to how Guillermo del Toro became fully accepted when he debuted Pan’s Labyrinth, and it’s awesome to see a very passionate filmmaker be awarded such a devoted following based on the strength of his work alone, especially when it’s mostly for a film that otherwise would have slipped completely under the radar.

That being said, while this is a very good movie, and very entertaining pretty much from the first scene onwards, there were a couple of parts where I could feel it may have been oh so slightly overhyped. To get into them would honestly be a spoiler, and it really is best that you go into this as blind as you can, but it’s really only a couple of instances where certain motivations were called into question. It’s not enough to ruin the film for me in the slightest, but it’s sometimes nice to acknowledge the flaws, however minor they may be, in a film that is otherwise universally adored. That way, it just shows that human hands made it, instead of machines designed to make something completely and utterly flawless, because then it’s at least got issues and is a little rough around the edges, much like how none of us are completely perfect.

Appropriately, Parasite does feel like a very human movie, once you look past the mayhem happening around it, with strong themes about family, class and the nature of optimism itself dominating its subtext. Maybe that’s why people are responding so strongly to it, since while it may be in Korean its commentary is universal. I can certainly get behind it as a great, thrilling movie that more people should definitely check out, if only because it will mean we’ll finally get an official Snowpiercer release here in the UK, especially after this movie has done so well with audiences.

Parasite is a very entertaining and thrilling dark comedy that is well-made by filmmaker Bong Joon-ho, well-acted by a strong ensemble, and constantly keeping you on edge with its unpredictability and strong humanity, which are more than enough to forgive its minor, minor flaws.