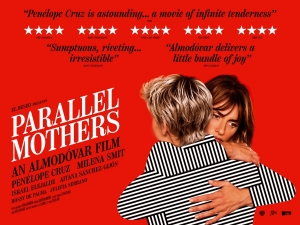 BASICALLY…: Two expectant mothers (Cruz and Smit) form a connection when they give birth the same day…

Spanish auteur Pedro Almodóvar and A-list actress Penélope Cruz have worked together on a total of seven films (and counting) so far in their respective Oscar-winning careers. I can’t say that I have seen each and every one of their collaborations, but I’ve seen enough to know that their latest, Parallel Mothers, is by far one of their strongest unions to date.

As per the usual Almodóvar project, Parallel Mothers dives head-first into colourful melodrama, and sometimes isn’t completely subtle in its approach (as is the Almodóvar way), but makes up for it with an engaging and tender narrative told gently and with real passion for both filmmaking and storytelling, all from someone who clearly loves the medium and has done for many years, without a hint of their adoration letting up in any way.

The film follows a woman names Janis (Cruz), a photographer who falls pregnant after a fling with married forensic archaeologist Arturo (Israel Elejalde), who has offered to dig up the hidden remains of several men executed and buried during the Spanish Civil War, among them Janis’ great-grandfather. While on the maternity ward nine months later, she befriends Ana (Milena Smit), an expectant teen, and the two of them end up giving birth on the same day to two daughters, exchanging numbers before parting ways with their respective babies. However, Janis makes an alarming discovery which ends up tying her much more closely to young Ana, positioning the both of them in a tragic situation that ends up bonding them for life.

When you find out what exactly the overarching dilemma of Parallel Mothers is, and the upsetting add-ons that pile on top of the already-heated scenario, the film becomes a much more tender drama with hints of dark tragi-comedy that contribute to its sizzling personality. Almodóvar brings his reliably flamboyant colour palette to the picture, which has lightened even some of his darker entries like The Skin I Live In and Bad Education, and as ever the film is gorgeously shot and framed down to the last detail by regular cinematographer José Luis Alcaine, accompanied by a riveting dramatic score by Alberto Iglesias. However, it is in the writing where Almodóvar shines brightest, with a story that is neatly paced and naturally unfolds with a real sense of grace, making every new revelation feel authentic and earned without resorting to overdone melodrama. The dialogue, too, is some of the filmmaker’s strongest in ages; you really feel a lot of Almodóvar’s personality shine through, but in a way that allows you to really understand these characters and why they keep certain things to themselves as well as how they are flawed but still human enough to empathise with.

On-screen, Penélope Cruz outdoes herself in a fantastic lead performance that serves as a firm reminder that she is a true movie star (and not just in Spain) for a reason. She and co-lead Milena Smit share a number of tender scenes together, and they act near-perfectly opposite one another as they face a number of challenging personal scenarios, matched only by the adorable infants playing their respective babies. Their relationship does take an intimate turn about halfway through, which part of me feels like it happens a little too suddenly given the characters’ personal troubles, but they’re both exceptional enough actresses that they’re selling even the most random developments that unfold between them in this movie. Special mention goes to Aitana Sánchez-Gijón as Ana’s self-obsessed actress mother, who shows up for a number of monologues to vent about her own lack of responsibilities as a mother, which again is boosted by Almodóvar’s punchy dialogue.

The film starts to loose its way during the final fifteen minutes, when the main plot is basically abandoned in favour of a slightly less interesting excavation sub-plot, which despite shedding light on the atrocities of the Spanish Civil War comes out of left-field to disrupt the perfectly fine pace that Almodóvar had established. Moments of surrealism and somewhat heavy-handed imagery begin to dominate, with important character strands being resolved via some secondary dialogue, and leaving the audience on a bittersweet note that feels a bit too preachy for its own good.

Luckily, the 105 minutes before then are rather stellar, always holding your attention with strong filmmaking, writing and performances that position both Almodóvar and Cruz as a true collaborative force that isn’t to be reckoned with.

Parallel Mothers is one of the strongest collaborations to date between filmmaker Pedro Almodóvar and leading actress Penélope Cruz, with passionate filmmaking and excellent performances dominating this tender and engaging melodrama that hits most of the right notes.

Parallel Mothers is now showing in cinemas nationwide – click here to find a screening near you!