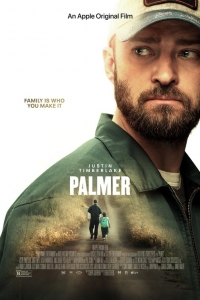 Justin Timberlake’s acting career is rather strange when you really look at it. He’s worked with notable auteurs like David Fincher, Woody Allen and the Coen brothers, but his name is also attached to some incredibly out-there projects like Richard Kelly’s Southland Tales, the Trolls movies, and even Mike Myers’ notorious bomb The Love Guru. No matter the movie, though, the former *NSYNC member is hardly the worst part of them, as he’s proven himself to be a fine enough actor to justify the music-to-movies transition that numerous other musicians haven’t been as fortunate to make.

In his first live-action vehicle since Allen’s 2017 movie Wonder Wheel, Palmer sees Timberlake at that point in his career where he’s been acting for long enough now that he perhaps thinks to himself, “maybe I should aim for one of those Oscars folks keep telling me about,” and picks perhaps the most bait-y material to potentially impress awards bodies with. Flawed hero looking for redemption? Check. Social issues that are currently part of the zeitgeist? Check. Adorable little kid with whom he can bond and win over the steeliest of hearts with? Absolutely a check.

Now, I’ll admit that’s probably a very cynical attitude towards this kind of film, but the difference between me and Palmer is that I’m willing to admit that I’m being cynical. This movie, on the other hand, with its incredibly formulaic plot and cloying, manipulative stabs at drama, doesn’t seem to have anything new to say or do, other than to try and get its main star on the final Oscars shortlist for Best Actor, and even then its chances are slim at best.

Timberlake is Eddie Palmer, a man who returns to his small Louisiana town after being paroled from prison, following an attempted murder in his youth. He immediately goes to stay with his grandmother (June Squibb), who lives next door to a small trailer where a young boy named Sam (Ryder Allen) lives with his crackhead mother (Juno Temple) and her abusive boyfriend (Dean Winters). Needless to say, because I cannot even begin to count how many movies like this have been made before, Palmer begins bonding with the young boy, who is already showing explicit signs that he’s gay – he likes to play with dolls, watches cartoons about fairy princesses, and even wears hair clips – and together, they form an unlikely friendship which, of course, inspires Palmer to be a better person and all that malarky.

I doubt that neither director Fisher Stevens nor writer Cheryl Guerriero, nor even Timberlake, had bad intentions when they set out to make this film. The problem is, Guerriero’s script is far too formulaic for its own good, throwing in cliché after cliché which it seems to think is coming up with for the very first time, and because a lot of what we see here has been done much more effectively in other movies, any similar attempts simply fall flat. Pretty much from the opening few minutes, you can guess each and every plot point that’s about to follow, including which characters or lines of dialogue are going to be important later on, and the film doesn’t really offer many unexpected twists or turns to go along with them either. It’s pretty much exactly the kind of movie you think it’s going to be: a well-meaning weepie that’s safe and predictable. Because of that, though, it’s hard to pick it out from the countless other movies with this similar type of plot, and its good intentions cannot override a plot we need to be more invested in, other than something we’ve seen many times over.

The same goes for its characters, who largely stick to their designated archetypes and strive to be barely anything more. Juno Temple’s junkie mother is just another example of this type of role, complete with the jittery body language and bony exterior you’d find with most addicts (though it is a slightly more rounded version of this character than Amy Adams in Hillbilly Elegy), the kind teacher/love interest played by Alisha Wainwright is no different than in any other tearjerker drama like Wonder or Gifted, and June Squibb is essentially playing June Squibb once more (and God bless her for it). As for Palmer himself, it’s hard to get a read of this guy at first because he doesn’t say or do that much throughout the first act, nor do we really know much about him until it’s too late to properly get invested in him. He mostly seems to just be, once again, the latest in a long line of examples where you have the flawed hero who keeps to himself and wants to atone for his past mistakes. The actors playing these parts do their jobs well enough, and Timberlake himself is decent in the title role (though something about his delivery, his voice, even his physique suggests that he might have been slightly miscast), but again, this script relies so much on what’s been proven to work in the past that there’s not much room left to shine with its own ideas or sense of drama.

For a movie like this to land the way it clearly wants to, it desperately needed someone to have another look at this script and trim away some of the more familiar components that ultimately drag it down. There is certainly a solid movie buried somewhere underneath here, but it’s drowned by excessive safeness and all too formulaic writing to really land its punches. It probably won’t equal awards glory for Timberlake, but Palmer has a few more problems than just its lack of recognition at the Oscars.

Palmer suffers from far too much reliance on formulaic writing with thin characterisations to land its desired dramatic blows, despite some good intentions and decent performances.