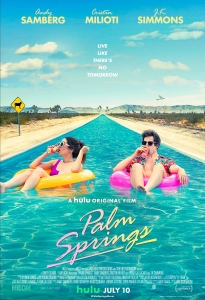 BASICALLY…: During a wedding in Palm Springs, maid of honour Sarah (Milloti) finds herself in a surreal situation when she meets laid-back Nyles (Samberg)…

For us Brits, the wait for the critically-acclaimed comedy Palm Springs has been exactly like living the same day over and over again.

Despite originally setting acquisition records at the 2020 Sundance Film Festival – by a mere 69 cents, no less – not to mention some very positive reviews from critics who labelled it a potential sleeper hit, the pandemic forced the film onto US streaming service Hulu last July, but a release in the UK went unconfirmed for many months. Even when it was eventually announced that UK audiences would finally see it via Amazon Prime Video, albeit more than a year after it first debuted to near-universal acclaim at Sundance, some expressed concern that it would arrive when its buzz had all but evaporated (the film’s Sundance record was even broken earlier this year by Apple TV+’s $25 million acquisition of audience hit CODA). Would UK audiences still be interested in seeing a film that many others had already seen months earlier, including those who had accessed Hulu via VPN services?

That’s a question that should be answered with an emphatic “yes”, because even after all this waiting on this side of the Atlantic, Palm Springs is a frightfully funny and exceedingly original time-loop comedy that was well worth the wait.

The film primarily takes place during a wedding in the desert landscapes of the title, where maid-of-honour Sarah (Cristin Milloti), sister to the bride Tala (Camila Mendes) and overall black sheep of her family, meets laid-back guest Nyles (Andy Samberg), who seems all too relaxed and chilled about everything, as though he’s been through all of this many times before. However, one thing leads to another, and suddenly Nyles is being chased by J.K. Simmons with a giant crossbow, which itself leads to Sarah waking back up in her bed from that morning, and finding that the entire day is set on endless repeat. Nyles, who has been stuck in the loop for so long that he can barely even remember his life beforehand, becomes her constant companion as the two are forced to repeat the same day over and over, and introduces her to his nihilistic way of thinking; after all, why care about anything when nothing seems to matter?

There are many things about Palm Springs which instantly set it apart from other time-loop movies, from Groundhog Day to as recently as The Map of Tiny Perfect Things (another Amazon Prime Video exclusive). For one, its off-kilter and occasionally surreal sense of humour is very much on brand with Samberg and his Lonely Island label (his bandmates Akiva Schaffer and Jorma Taccone serve as producers alongside him), with lots of quick gags delivered at near breakneck speed but virtually every single one of them landing daintily on their feet, matched with some very funny dialogue and visuals by writer Andy Siara and director Max Barbakow respectively which liven up a very well-worn premise. It’s also a very clever script in how it examines a very different way of coping with being stuck in an infinite time loop; Nyles has been in it for so long that he’s firmly adopted a care-free attitude where he can do whatever he wants, from spending the entire day in a stranger’s pool to planting a bomb in the wedding cake, with the knowledge that everything will immediately reset the minute he falls asleep. Both he and Cristin Milloti’s Sarah, who at first reacts how one normally would to being in this strange situation but eventually succumbs to a similar “screw-it-all” attitude, are the kind of time-loop protagonists that really don’t feel like they’ve been done before, because not only are they embracing the consequence-free scenarios but are also legitimately comfortable with being stuck, because what else do they have to live for in the real world?

Of course, it’s not long before the other shoe drops and they start to actually care about their lives once more – and possibly, even each other – but even when it feels like the film is done having fun, it’s still got plenty of tricks up its sleeve to never lose its momentum. Both Samberg and Milloti are great together, with their easy chemistry driving a lot of their more tender scenes with one another, and they also give very believable individual turns that are by themselves very strong (Samberg in particular is perhaps at his most restrained here, perfectly suiting the care-free nihilism his character frequently spews out). There are also some great moments with J.K. Simmons’ character, who we learn is also somehow caught up in these other-worldly affairs thanks to some drug-fuelled antics, and seeing him chase down Samberg with a giant bow and arrow is always cause for strong laughter.

Most of all, though, Palm Springs does what a lot of the lesser time-loop movies very often fail to do, and that’s actually feel fresh and new. Some movies like Happy Death Day and Edge of Tomorrow certainly experiment with the concept through different genres, but not since Groundhog Day has a comedy explored it in such vibrant and hilarious fashion, not to mention throwing in some unexpected new twists that give it a purely original mindset. It’ll be interesting to see in the future if Palm Springs is brought into the conversation of time-loop movies as much as the classic Bill Murray movie is, because it feels like a new precedent has been set for these kind of films to tap into new, previously undiscovered corners that concepts like this only hint at, which makes this film all the more impressive to (finally) behold.

It’s been a long, long wait for UK audiences to finally see Palm Springs, but by God was the wait worth it in the end.

Palm Springs is a fresh, delightfully original take on the classic time-loop concept, exploring new areas such as the care-free nihilism of its lead characters and their consequence-free landscape, but also remembers to be a very funny comedy with quick gags that frequently hit the mark, great chemistry between leads Andy Samberg and Cristin Milloti, and a genuinely smart script that combines them into a future classic you’ll want to watch over and over again.