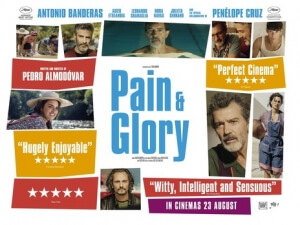 BASICALLY…: Filmmaker Salvador Mallo (Banderas) finds his past and present colliding as he begins to contemplate his life choices…

With twenty-one features to his credit across a timespan of almost forty years, Spanish auteur Pedro Almodóvar has achieved a unique status in international cinema not seen since the likes of Federico Fellini and Akira Kurosawa, where his films will almost certainly acquire attention because of his name alone. A name like Almodóvar’s carries a certain artistic weight to it thanks to critical hits such as All About My Mother, Talk To Her and Volver, which have all earned their fair share of awards from Academy Awards to BAFTAs to any and every critics’ circle you can think of, and because he is so respected in the worldwide film community it’s reached a point where his name will often overshadow some of his big-name stars in the advertising.

Although in the case of his latest film, Pain and Glory, Almodóvar truly is the star; a very personal project in which the filmmaker takes elements from his own life and puts them up on the screen for audiences everywhere to see, the movie is one that could only have been brought to life by the man himself, and offers a meditative reflection of a fascinating figure through fictional avatars which are as graciously performed as they are generously written.

The film is about a man named Salvador Mallo (Antonio Banderas), an aging filmmaker who’s currently in a creative rut and apparently suffers from a crippling amount of illnesses that are affecting his body (the simple act of swallowing, for example, leads to violent coughing fits). When he is invited to do a Q&A for one of his earlier films, he contacts his lead actor Alberto (Asier Etxeandia), thirty years after falling out on the set of their collaboration, to see if he wants to participate in the post-film discussion with him. One thing leads to another, and Salvador begins smoking heroin which prompts him to experience flashbacks to his childhood, in which ten-year-old Salvador (Asier Flores) and his mother (played in flashback by Penélope Cruz, and by Julieta Serrano later in life) live in a cave-like apartment as young Salvador begins to develop his creative passions as well as his sexuality.

It is a self-reflective movie, which Almodóvar mirrors as close as he can to his own personal life while still keeping most of his cards close to his chest. Beyond the fact that Banderas’ character is also a filmmaker that makes movies similar to the ones that Almodóvar himself used to make (and to an extent still does to this day), there is a lot from the director’s own life up there on-screen, including costumes that come straight from his own closet, and the character’s apartment which has apparently been designed to look like a near-exact replica of Almodóvar’s own living quarters. Rarely before has the filmmaker exposed this much of himself in front of the camera – with some exceptions, including a sub-plot about the character’s growing addiction to heroin that the director claims to be completely fictional – and it amounts to an emotional experience for the audience to witness, especially those who have been watching his films from his 1980 debut Pepi, Luci, Bom and Other Girls Like Mom onwards, as they will have likely not seen an Almodóvar film tell a story this personal across his near four-decade career.

Those little personal touches he brings to the film elevate the style, which from the opening title sequence of swirling paint bordering the screen onward is unmistakably Almodóvar, and the drama which can certainly feel episodic and meandering, but when it hits that emotional sweet spot, such as a sequence that sees the main character share a tender reunion with a former male lover, it is a deeply effective piece of work. Also bringing his A-game to the material is Antonio Banderas who, in his eighth overall collaboration with the director, delivers one of the most understated, controlled and – yes – strongest performances of his career; the actor exhumes a warm and calm sensibility in his not-quite impersonation of Almodóvar, with an underlying sense of self-doubt as he reflects on his life leading up to this point as well as whether or not he has it in him to keep on doing the very craft he loves doing and is loved for doing. Almodóvar fans will also be excited to see Julieta Serrano pop up later in the film as an older version of Salvador’s mother – played charmingly in the childhood flashback sequences by Penélope Cruz – as it marks the first time in thirty years that the actress has worked with the director, and she does some good work in the short amount of time she’s actually on-screen.

I get the feeling, though, that those less familiar with Almodóvar’s work might not be as quick to pick up on some of the more referential aspects of the movie. Having only seen a handful of his films myself, I can’t exactly call myself well-versed in his work, so perhaps what may please others more familiar with his filmography might go over the heads of those that aren’t as up-to-date on all things Almodóvar. Still, even looking in on this film from more of an outsider’s perspective, I found this to be a smooth-flowing and often emotional piece of work, which the director lets transcend its semi-autobiographical roots into something that won’t necessarily win over everyone, but has a clear sense of passion driving itself to a meditative and thoughtful conclusion.

Pain and Glory sees filmmaker Pedro Almodóvar at his most personal, offering audiences a meditative semi-autobiographical look at his life which is told through episodic but emotional segments and a career-best lead performance by Antonio Banderas.

Check out Pain and Glory showtimes in London
via