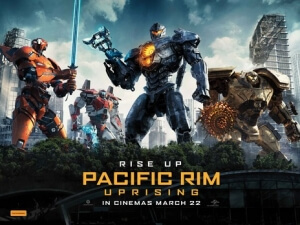 BASICALLY…: A new generation of Jaeger pilots head into battle against fresh threats from the previously thought to be destroyed Kaiju enemy…

Thanks to Michael Bay’s assault to the senses with his five (!) incoherent and noisy Transformers movies, the world is understandably not too keen on the idea of giant robots in battle anymore. Luckily, we’ve still got the Pacific Rim movies to act as a sobering alternative; the first, directed by Guillermo del Toro back in 2013, took everyone by surprise for not only being a fun and enjoyable effects extravaganza, but also had the style and restraint to explore its world and its characters in more of a loving fashion than any of those other giant robot movies.

Meanwhile, even though the sequel, subtitled Uprising, isn’t stylistically on par with the first – which probably has to do with the fact that del Toro didn’t return to direct this one, though he still remains on board as a producer – it is still light years ahead of Bay’s franchise, because as loud and dumb as this movie can be, there is at least some semblance of humanity in there and a hell of a lot more mindless charm to it, and you don’t feel like all five of your senses have been mercilessly ravaged for what feels like an eternity. This one clocks in at just over ninety minutes, for one, so that’s already one lesson Bay could have used from these movies, including this one.

Taking place ten years after the events of the first film, we follow Jake Pentecost (John Boyega), the son of Idris Elba’s fallen war hero Stacker Pentecost, who used to pilot Jaegers (giant man-operated robots designed to fight off invading giant monsters known as Kaiju), but now makes his way in life via shady dealings on the black market. He is eventually brought back into the life of military defence to help train a new group of fresh-faced Jaeger pilots, including young new recruit Amara (Cailee Spaeny), with the assistance of his estranged former co-pilot Nate (Scott Eastwood). Perfect timing, as it turns out, because shortly afterwards a new threat emerges from Kaiju forces that is both unexpected and unlike anything that’s been encountered before, and so Jake must lead the charge in defending the planet against their new plan to destroy the world.

Though del Toro’s directorial presence is sorely missed this time round (although given he decided to do The Shape of Water instead, I guess it’s a noble sacrifice), replacement director Steven S. DeKnight – marking his film directorial debut here, having previously been the creator of TV series Spartacus, as well as showrunner on the first season of Netflix’s Daredevil – retains the overall sense of silly fun from the first film and takes things in a suitable direction that’s not too far off from what del Toro was originally gunning for last time around. You don’t get as much insight into other interesting parts of this world like the black market and how society has adapted to live around the constant Kaiju threat, which was one of the many strengths of del Toro’s movie, but DeKnight keeps the focus on the set of characters it introduces, both new to this film and a few returning figures as well, without feeling like it’s too overstuffed or all over the place. Boyega, who also serves as a producer on the film, is a really strong lead in this film; he’s charismatic as hell, he can sell any character beat or line of dialogue thrown his way (though nothing quite as instantly iconic as Elba’s “cancelling the apocalypse” speech from last time), and he actually feels like a guy you would want to follow into battle, because he’s quite good at adopting a leader position. He’s one of the few things about this movie that’s better than the first, because as likeable as Charlie Hunnam’s lead character was in that film, he was pretty much a blank slate for most of it, and was one of the least interesting characters as a whole; Boyega feels much more like leading-man material, and he delivers a better performance than Hunnam did which automatically puts him ahead of the competition.

The action, for the most part, is pretty enjoyable to watch, especially if you choose to see this on an IMAX screen. Even though it’s nothing groundbreaking or really that original – the third act, in particular, is the same kind of “giant robots battling in the midst of a giant city” stuff we’ve seen many times before, much of it funnily enough in Bay’s Transformers movies – it’s still done in a way where you can not only tell what is actually happening, as well as who and where everyone is in conjunction with each other, but because the film has set up many of these characters as largely fun people to be around, you actually care for the heroes and want to see them win in a seemingly impossible fight against the monstrous enemy.  You can tell that even though this is a giant effects-heavy blockbuster, the creators still made an effort to give their film a little bit more of a soul, which is more than anyone can say about the majority of the other big-budget tentpole releases shoved out there by studios. It has a goofy charm to it, kind of like a hybrid of both Power Rangers and any giant mecha anime you could possibly think of, which certainly won’t win over most audiences – there is quite a lot of destruction porn in this film, enough to make even the climax of Man of Steel look relatively tame by comparison – but for those going in that know exactly what they’re going to get, this is a fun and unpretentious blockbuster sequel that doesn’t necessarily outshine the original, but doesn’t come so far behind it either.

Take it for what it’s worth, but I think we can all agree that we’d rather digest either of these films than try to swallow any of the five Bay Transformers movies any day.

Pacific Rim: Uprising may not have the stylistic presence that the first film’s director Guillermo del Toro brought, but it still serves as a passable slice of robot-vs-monster fun led by a charismatic John Boyega and a sorely-needed sense of fun.