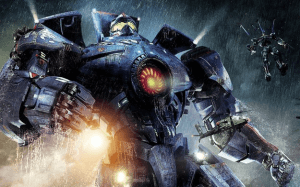 Though 2013’s summer blockbuster season was plagued by unnecessarily dark and unenjoyably grim entries like Man of Steel and The Lone Ranger, one of the unexpected shining lights was director Guillermo del Toro’s monster-versus-robot epic Pacific Rim which, aside from hosting visually pleasing VFX that for whatever reason got snubbed at the Oscars (seriously guys, what was up with that?), set a well-meaning and fun tone with likable characters and a story not too complicated to follow. The film’s worldwide gross of $411 million has caused fans to feverishly debate on whether that means a follow-up is inevitable, and now, in the video below, del Toro had made it official:

You heard it from the man himself: del Toro is officially developing Pacific Rim 2, aiming for a release on April 7th, 2017! The Pan’s Labyrinth and Hellboy filmmaker is also working on the screenplay with writers Zak Penn (The Incredible Hulk) and Travis Beacham (who wrote the first Pacific Rim).

Not only that, but an animated series based on the film is being made as well as a continuation of its prequel graphic novel Pacific Rim: Tales From Year Zero. So, it appears that the Pacific Rim franchise is well and truly underway!

In an exclusive statement to Buzzfeed, del Toro claimed that “The characters I love will return… Raleigh, Mako, Newt, Gottlieb and who knows, maybe even Hannibal Chau – but we are taking them into a fresh territory that will display amazing sights and battles. The first film set the stage and now we’re ready to have a blast.” The site also adds that the original film’s surviving cast, including Charlie Hunnam, Rinko Kikuchi, Charlie Day, Burn Gorman and possibly Ron Perlman, are expected to also return though no deals have been officially made yet.

The 2017 release date gives del Toro and his team plenty of time to fine-tune their follow-up to the best they can, while also giving the director breathing space to finish his current projects – his next film, horror film Crimson Peak, is now in post-production and still headed for a 2015 release, while he is also busy executive producing FX’s upcoming horror series The Strain, based on his and Chuck Hogan’s novel trilogy.

Legendary Pictures, the studio behind Pacific Rim and this summer’s hit Godzilla reboot, is clearly relying on the first film’s international grosses – which greatly outweigh its US domestic gross of just over $100 million on a $190 million budget – for further continuation of the franchise, and by giving Pacific Rim 2 a fairly distant release means that they definitely care about its story and characters rather than just its action and effects. Take note, Michael Bay; THIS is how you develop a giant robot franchise…

Either way, Pacific Rim 2 is now officially on board for an April 2017 release – check back soon for more information as we get it!