Oxygen (Review) – This Claustrophobic Thriller Will Leave You Breathless 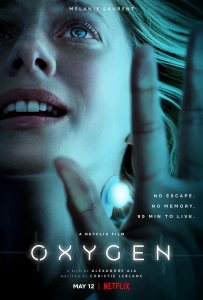 BASICALLY…: A woman (Laurent) mysteriously wakes up in a cryogenic chamber which is slowly running out of air…

The thought of being trapped in a small, barely functionable space with limited supplies to ensure survival is enough to trigger the fears of any claustrophobics out there who may be reading this (and to those people, I can only apologise). Imagine, then, what watching a film like Oxygen could do to their overall mental well-being, because I personally do not suffer from claustrophobia and even I was finding it difficult to breathe during certain parts.

The effective sci-fi thriller from director Alexandre Aja – best known for horror-based entries like Crawl, Piranha 3D and the 2006 remake of The Hills Have Eyes – falls into a similar category as other outings featuring characters trapped in impossible-to-escape situations like Buried (in which Ryan Reynolds is trapped in an underground coffin), Phone Booth (Colin Farrell held hostage in the titular location), and Devil (four people stuck in an increasingly silly supernatural whodunnit overseen by producer M. Night Shyamalan… and a lift). Like most of those, Oxygen primarily takes place in a singular location with one primary actor on-screen at practically all times, and both the actor and the filmmaker make as much use of what few props they have at their disposal to carry a highly intense survival movie that just about works, despite a couple of nags.

In the context of this film, we first find our main character (Mélanie Laurent) suddenly wake up in what she soon discovers to be a medical cryogenic pod, covered in wires and tubes. She doesn’t appear to have any memory of her past, let alone how she even got to be in the pod at all, and only has the pod’s interface M.I.L.O (voiced by Mathieu Amalric) to initially communicate with. She eventually learns that she is a scientist by the name of Dr. Elizabeth Hansen – “Liz”, from here on – but other developments will have to come quick because, due to uncertain damage made to the pod, the oxygen levels are plummeting at an alarming rate, and so Liz must recall her lost memories if she is to even have a chance of surviving without asphyxiating.

The film is a tightly wound and suspenseful outing for director Alexandre Aja, who with some of his past horror movies hasn’t exactly become known for his subtlety, and here he also can’t help running certain metaphors into the ground (it opens with the all-too knowing shot of a rat in a maze, a recurring motif that might as well flash the word “metaphor” on the screen every time it pops up), but manages to keep it together for the most part to deliver a number of well-done sequences that really do leave you shivering with anticipation. Aside from Aja’s tingly direction that incorporates some stylish cinematography to capture the main character’s encapsulation – a slow zoom out from the pod to an all-black background is particularly memorable – the other reason this movie works as well as it does is because Mélanie Laurent is on terrific form here. Not only is she on-screen for practically the entire movie, she has very limited space in which to move most of her body, so a lot of her performance rests on a ton of emotional facial expressions that really drive most of her character’s quick-witted decisions that largely seem sensible given the circumstances; on top of that, since her character is essentially working from scratch when it comes to figuring out her identity, Laurent has a bit more free rein to leave her mark on a blank slate, and manages to keep her role engaging for the viewer while she, along with them, figures out more and more about herself. The actress does some very fine work here, as does Aja in capturing her increasing stress levels as the oxygen continues to run out and leave her with increasingly fewer options.

However, while the overall concept works fine enough as a hook to draw the viewer in, the further this script goes into its rather complicated plot, the more difficult it honestly becomes to keep track of what makes sense and what really doesn’t. Writer Christie LeBlanc appears to have over-compensated somewhat for its bare-bones premise by adding a bunch of seemingly never-ending layers to the mystery, with each revelatory piece of information being unveiled as though it’s the big twist of the movie, only for it to keep going in directions which begin to get just a little bit sillier. There is a lot of exposition to unravel during these moments as well, containing important facts that aren’t given enough detail for them to resonate in the way that the movie perhaps intends, and some major reveals tend to come out of nowhere without much set-up for them beforehand. It turns a simple enough premise into a needlessly complicated web of sci-fi mumbo-jumbo, which seriously should have either been trimmed down significantly to make it more palatable for the viewer, or at the very least given more attention so that certain bits can feel like they add up better.

Aja’s direction and Laurent’s performance, though, do manage to offset the somewhat jumbled script, because their combined efforts do make this a rather intense viewing experience, especially in select sequences that turn simple things such as an automated countdown into a nerve-racking display of suspense. Given that the film was shot last summer, in the middle of the pandemic, it also makes sense as to why there is so much emphasis on themes such as isolation and panic, making it an oddly timely bit of sci-fi cinema as well (without divulging too many spoilers, there might also be a mysterious virus in circulation during this plot). As for where it stands amongst other isolationist thrillers like Buried, it’s hard to say how Oxygen will be seen by curious viewers in the future, but one thing’s for certain; whether or not you find some of the twists to be more than a little ridiculous, or whether you’re even at all claustrophobic, there are effective enough moments, performances and overall vibes in this film that are destined to leave you breathless.

Oxygen is a suspenseful and well-crafted sci-fi thriller that sees both director Alexandre Aja and lead actress Mélanie Laurent impressively utilise their limited workspaces to deliver some truly nerve-racking sequences that will make most people, regardless of whether they have claustrophobia or not, feel on-edge throughout most of it, which is enough to make up for a script that turns its simple enough premise into a needlessly complicated jumble of ideas that often make it difficult to tell whether or not much of it actually makes sense.

Oxygen is now available on Netflix.