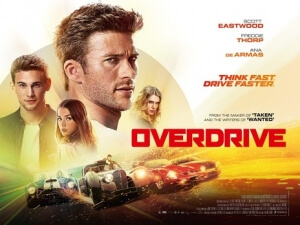 BASICALLY…: Two car-thief brothers (Eastwood and Thorp) steal a car belonging to a powerful mafia boss (Abkarian), and in exchange for their lives they are forced to steal from the boss’s arch-rival…

A movie like Overdrive is entirely custom made for those people who think that the Fast & Furious movies would be so much better if they were stripped of any fun and personality, and instead of embracing its silly clichés just went ahead and did them un-ironically. If you’re one of those people, have as much fun with this schlock as possible; as for the rest of us, nothing has ever made you want to just go back and watch any of those films from the fifth one onwards, because as dumb as they can get they are a lot more fun than this.

This movie has clearly been given the shaft by distributors – hardly any trailers or promotional material have been released, and yet this is a nationwide release of over 300 screens – and it’s not hard to see why. A knock-off of so many car-centric action movies, and not just the Fast & Furious franchise, Overdrive is about two brothers (Scott Eastwood and Freddie Thorp) whose only shared personality trait seems to be that they are handsome young white men, who operate as car thieves in the South of France along with Eastwood’s equally attractive and personality-free lover (Ana de Armas). When they unknowingly steal a vintage car from a ruthless gangster (Simon Abkarian), they are easily tracked down and threatened with their lives – that is, until they convince him that they can easily steal a priceless Ferrari from the gangster’s arch-rival (Clemens Schick), and are thus given a week to do so. The race is then on to assemble a crew to plan and pull off the perfect heist, and of course they’re all made up of the most attractive models that they could afford from GQ Magazine or the European equivalent, and if you don’t know where it all goes from there you clearly haven’t seen many of these car-based action films.

As generic as this plot is – one of the main brothers even says that this is their last heist before leaving the game altogether – nothing can prepare you for the onslaught of cliché after cliché that this movie throws at you, and it doesn’t even do anything with them to make them stand out; it really is one of those action films you would have seen in the late 90s or early 2000s, the kind that takes itself way too seriously no matter how absurd it gets. A lot of the twists and turns you either see coming from miles away, or don’t even make sense in the grander scheme of things, and you’re left wondering how elaborate the writers and filmmakers can make this heist plot seem with every passing second. By the time we come around to the final few twists, we’re so busy trying to make sense out of everything that came before it that we’re too distracted to even care about what is happening, except for how it’s significantly dumber and less impressive than some of its higher-budgeted brethren.

It’s also distracting how this movie is anchored by two of the most uncharismatic lead characters for this kind of movie, with Eastwood and Thorp coming off as smarmy, smug douchebags that think they know more about the game than anyone they surround themselves with, and when they’re meant to be angry act as though their daddy has just taken away the keys to their sweet Corvette. Eastwood I’ve seen be perfectly serviceable in other things, but both he and Thorp – a relatively unknown British actor – are pretty awful here, playing two people who you could not be less sympathetic towards if you tried, and they can’t even bring any sense of charisma to their parts to hide the fact that they look like they just learned their lines the previous night before shooting. The film tries to play them off as having a similar connectivity as Vin Diesel and Paul Walker do in the Fast & Furious films, but a severe lack of chemistry between them aside, these are the kind of characters who would feel more at home in the xXx movies than Fast & Furious because they’re such dickheads most of the time and they’re not at all charming enough to disguise that fact.

I know that I keep mentioning the Fast & Furious franchise in this review, and that’s really due to how much this film really wants to have that series pumping through its veins, but it always comes across as a laughably pathetic attempt to cash in on those films’ successes. Aside from the heist-centric plot of the fifth film, it also shoots cars about as pornographically as any vehicle in those films, and paces car chase sequences with as much intensity as a Formula 1 race; however, the key to those films which Overdrive seriously lacks is a sense of fun. Yes, a lot of the stuff that comes with a typical Fast & Furious movie is dumb to the core, but it makes up for that with going as over-the-top in its action set-pieces as it can (need I remind you, the last one featured zombie cars, and a Lamborghini trying to outrun a submarine in the middle of a frozen lake?) and having actors that have enough charm and charisma to spare who can deliver some fun one-liners and have enough credible screen presence to make them work. They are, for all their faults, fun movies, and Overdrive so desperately needed to have more fun with itself and focus less on its own pretences to be anywhere close to those kind of films.

Alas, Overdrive will soon be forgotten about, especially after we pop in a DVD of Fast & Furious 5 or above once we think to ourselves, “wow, we should be watching that instead – at least it’s fun.”

Overdrive is a laughably pathetic attempt to cash in on the success of the Fast & Furious franchise, only it severely lacks any of the ingredients that made those films dumb but fun, and along with uncharismatic lead actors and a generic plot that throws cliché after cliché at you without a hint of irony, it’s way more dumb than it is fun.