Over The Moon (Review)

Over The Moon (Review) 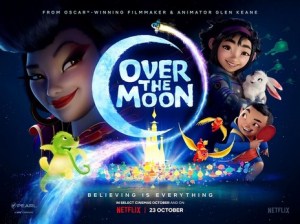 BASICALLY…: An adventurous young girl (Ang) builds a rocket ship and heads to the moon to meet the legendary goddess Chang’e (Soo)…

It’s amazing to think that, until now, legendary Disney animator Glen Keane has not been given his own animated movie to direct. The man who designed classic characters such as Ariel, the Beast, Tarzan and Rapunzel is very well regarded within his branch, and was recently even awarded his own Oscar for directing the short film Dear Basketball opposite the late Kobe Bryant, but Over The Moon marks his first go at the reins of a feature film – albeit co-directed by fellow Oscar-winning animator John Kahrs, who won for the visually stunning Disney short Paperman – and he certainly isn’t wasting his Disney influence on a film that has practically all the hallmarks of a classic musical from the House of Mouse, in the same way that Don Bluth’s Anastasia which ended up being released under 20th Century Fox (which is, ironically, now under the Disney umbrella).

However, none of that takes into account the sheer amount of insanity this movie has to its name, and I honestly can’t decide if I should respect it or be somewhat concerned, because while this movie is clearly ambitious, it’s a fever dream that sometimes makes Cats seem normal by comparison.

The movie, distributed by Netflix and part-produced by Pearl Studio – the China-based animation company who also partnered up with DreamWorks Animation for last year’s Abominable – is about a young girl named Fei Fei (voiced by Cathy Ang) who – in typical Disney fashion – is still mourning the loss of her mother four years prior. She becomes incensed to learn that her father (John Cho) has decided to remarry another woman (Sandra Oh), whose obnoxious young son Chin (Robert G. Chiu) is set to become her new step-brother, and that her one remaining solace – her belief in the moon goddess Chang’e (Philippa Soo), who legend says was separated from her mortal lover thousands of years ago – is mostly seen as make-believe by her family. She is inspired to travel to the moon and prove the existence of Chang’e, which she hopes will also get her father to reconsider his remarriage, and soon builds a rocket ship (as you do) to fly herself, her pet rabbit Bungee, and unwanted stowaway Chin to the solar base itself.

From there, it’s chaos – and by that, I mean it’s where the truly baffling material kicks in. The characters end up being transported to a neon realm of abstract beings, among them weird creatures like walking, talking mooncakes, giant frogs, a scientist rabbit, a weird and annoying dog-like being voiced by Ken Jeong, and literal – and I can’t stress that enough – biker chicks. On top of that, our introduction to Chang’e itself is something that only people in a weed-infused hotbox could come up with, as her introductory number isn’t so much “Let It Go” but the pop remix of “Let It Go” that you’d find buried on the CD soundtrack, performed like a Katy Perry concert where the audience is made up of dancing mooncakes, and said scientist rabbit is also the DJ. It’s insane to picture in your mind, I’m sure, but try actually seeing it for yourself; I promise you, it is baffling to witness, like you’ve snorted an entire bag of cocaine and this is the vivid hallucination you’re experiencing. Again, though, I have no idea whether to be impressed or freaked out, because the animation and the visuals are very high-reaching (emphasis on “high”) and clearly overseen by someone who knows a thing or two about memorable designs in this type of filmmaking, but the concepts and their execution are like something out of the Pink Elephants sequence from Dumbo; it’s pretty, but utter madness to behold.

The main problem with the film, and I really hate to bring this up, is with the script, which was written by Audrey Wells who sadly passed away from cancer in 2018. Though you can definitely feel the personal touch that Wells brought to the material with scenes that are ripe with emotion and sweetness, the plot takes far too many cues from Disney formulas – the dead parent, the uplifting musical numbers, the cute animal sidekicks (of which there seem to be about a dozen here; even young Chin gets his own reactionary frog sidekick), the overall message of love etc – to feel entirely genuine, like it’s too afraid to branch off into new territory. That could be down to the clear concessions it is making to appeal to both Eastern and Western audiences, in an attempt to blend both styles into something which otherwise feels derivative of far more memorable animated flicks, but sadly it’s a story that’s dominated by familiarity and some truly insane executions of certain creative ideas.

Sadly, there isn’t much else going for it; the songs aren’t very memorable, the characters are mostly just archetypes of classic Disney heroes and sidekicks (in fact, the best character out of all of them is the one that cannot speak; the main character’s pet rabbit is extremely adorable, and has some of the film’s most stand-out moments, all without a line of dialogue), and some of the film’s humour can get a little grating, particularly when Ken Jeong shows up as that Jar Jar Binks-esque dog/seal/whatever creature. It’s undoubtedly pretty to look at, and you can feel the ambition in these filmmakers, but unfortunately it’s nothing that you haven’t seen before, and unless you’re putting it on for young children there’s no reason to seek it out other than morbid curiosity.

Over The Moon is an ambitious but ultimately derivative animated film that borrows far too heavily from past Disney formulas to appear unique, despite some gorgeous if utterly baffling imagery that can’t shake away its weirdness to be a truly memorable family feature.