Outside The Wire (Review)

Outside The Wire (Review) 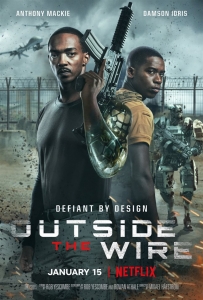 BASICALLY…: In the near future, a drone pilot (Idris) is assigned to an android officer (Mackie) on a mission to locate a doomsday device…

Seemingly following in fellow MCU star Chris Hemsworth’s footsteps by headlining his own major Netflix action movie, after the Thor star did so with last year’s Extraction, the Falcon himself (and possible future Captain America; let’s see where The Falcon and the Winter Soldier goes) Anthony Mackie is front and centre in director Mikael Håfström’s new sci-fi actioner for the streaming service.

It’s a major gain for the folks behind Outside The Wire that they have someone like Mackie, who’s a pretty charismatic actor in his own right, as its star because, frankly, the movie would have easily faded into a forgettable realm of purgatory without him.

Håfström’s film is set in the year 2036, when the US Army has incorporated more technology into their warfare, including the use of robot soldiers on the battlefield alongside human ones. After disobeying a direct order that results in two deaths, drone pilot Thomas Harp (Damson Idris) is sent to Ukraine, which is in the midst of a deadly civil war, where he is to report to Captain Leo (Mackie). Leo isn’t like any of the other soldiers, especially because he is also an advanced android super-soldier who masquerades as a human (even having the same level of emotions as humans do), and soon both he and his subordinate Harp must venture into the warzone to find and kill pro-Russian terrorist Victor Koval (Pilou Asbæk) before he acquires codes that could set off a chain of nuclear strikes.

The irritating thing about this movie is that there are several points where you can see some interesting ideas beginning to form, whether it’s during a conversation that the two leads share with each other or in scenes that show how different a warzone can be when you’re in it as opposed to watching it from a monitor, but then they’re shoved to the side to make room for more of its by-the-numbers action. It’s a movie that seems to be not entirely confident about branching out into its own strand of intriguing sci-fi themes, and instead relies far too heavily on tropes of the past as its safety net, invoking memories of everything from The Terminator to Robocop to even films that aren’t anywhere close to the sci-fi genre like Training Day and The Hurt Locker (the latter of which also starred Mackie). Because it’s largely comprised of things you’ve seen before in other movies, little room has been left for Outside The Wire to be its own thing, aside from those rare moments where it almost makes a point but then ignores it in favour of more pedestrian action.

Said action can sometimes be cool to watch, while other times it just goes in one ear and out the other, especially with fight choreography which is often marred by choppy editing and larger sequences which rely a bit too much on lacklustre CGI to fully look convincing. Director Håfström is no stranger to action movies, having directed the original Escape Plan with Sylvester Stallone and Arnold Schwarzenegger, but here he somehow feels just as self-restrictive as the script seems to be, going no further than some decent stunts which have been done more effectively in other movies, and all of that despite some heavy violence and curse words uttered left and right which definitely puts it above the standard 12A category. Nevertheless, it’s only intermittently entertaining, which for the concept it carries seems like a bit of a wasted opportunity to have things like its action be so mediocre.

The best part of the movie, if you haven’t figured it out already, is Mackie; you can tell he’s having fun here as this cyborg super-soldier who’s also got that Mackie swagger to him which is always entertaining to watch. His character definitely has echoes of Denzel Washington in Training Day, especially as the film’s plot goes further forward, and parts of Mackie’s performance also seem like they were inspired directly by the Oscar-winning turn that Washington gave in that movie (there are even direct scenes taken from that movie and transplanted into this one, albeit under wildly different contexts), but the actor is charismatic enough to pull it off, and he makes the most of it by simply having as much fun as he can. As the de facto audience surrogate, Damson Idris does fine work here, though he is almost always upstaged by the slightly more charismatic Mackie at every turn.

As fun as it is to watch Mackie be his charismatic self in a film like this, it still doesn’t stop the movie from being nothing more than just something that simply exists. Netflix seems like an appropriate place to put a movie like this, because it’s the kind of film that you’ll watch just the once and then let it scroll past you forever after, with very little (if any) desire to revisit it any time soon. It’s largely derivative of other sci-fi movies before it, the action is so-so, and any semblance of its own original thoughts are almost entirely forgotten so that it can indulge in safer outcomes.

It’s probably worth watching just for Mackie alone, but even then that’s not a formidable enough excuse to get fully invested.

Outside The Wire is a forgettable sci-fi action film which is largely derivative of other sci-fi action movies with little originality of its own, and while it’s fun to watch Anthony Mackie deliver a charismatic turn as a cyborg super-soldier not even he can entirely save a movie made up of so-so action and by-the-numbers plotting.

Outside The Wire is now available on Netflix.