Our Brand Is Crisis (Review)

Our Brand Is Crisis (Review) 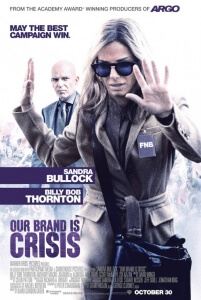 Call it a hunch, but we don’t think people would really want to see a political satire set in Bolivia, even with A-grade talent like Sandra Bullock involved. That’s the main reason why we think Our Brand Is Crisis bombed hard in the States upon its release there last October; it just isn’t a subject that is going to arouse even the slightest curiosity in the common moviegoer, so it was a pretty ballsy move to try and go ahead with it anyway, even if it did backfire horrifically ($7 million domestic gross against a $28 million budget – ouch).

We feel that David Gordon Green’s fictionalised version of Rachel Boynton’s award-winning documentary of the same name will meet the same miserable fate now that it’s hit UK shores – we counted less than five other people in our screening, and this was on an otherwise busy Saturday – not just because the subject matter is about as fascinating to most people as a fart in a swimming pool, but also because the film itself is, rather honestly, a little dull.

Bullock stars as “Calamity” Jane Bodine, a gender-swapped combination of several political consultants during the real events that inspired this movie, who is drafted out of exile and brought in to help Bolivian politician Castillo (Joaquim de Almeida) on his re-election campaign, which up until now is seriously struggling to keep ahead in the polls. Jane decides to sell Castillo as a rough and jagged candidate to boost his appeal, claiming that in times of crisis the Bolivian people will look to a more experienced and tougher individual to lead them, and so Jane and her band of experts, from Anthony Mackie to Scoot McNairy, Ann Dowd, Zoe Kazan et al, attempt to win him the election while also keeping one foot ahead of Jane’s bald-headed rival Pat Candy (Billy Bob Thornton), who’s working for the opposing team.

Starting out as a political satire of sorts, with the first two-thirds depicting in heavy detail the (dramatized) methods that Jane and co use to forward their underappreciated candidate, you can feel the influence of producers George Clooney and Grant Heslov wanting to steer this story down a similar path that Argo once went on; not that their influence is all encompassing, as Green directs the film well enough to make sure it’s not entirely bumpy. There’s even a few good comparisons one could make to the current state of politics in the US, at a time where Donald Trump is frighteningly winning over more and more supporters thanks to a poisonous yet somewhat ingenious campaign, with Castillo – a man who has no real charisma, charm or even appeal – being made to look utterly irresistible to the undecided voter.

However, as deep as the filmmakers and actors seem to be in all of this, Bullock especially in a truly great lead performance, it never gets to a point where what they’re taking about suddenly becomes interesting. Writer Peter Straughan, Oscar-nominated for Tinker Tailor Soldier Spy and most recently co-wrote the wonderful Frank, delivers a script that is almost nothing but exposition dialogue; there’s never a reason to really care about what’s going on and who it’s happening to because of it, and the constant political details being thrown at us do not make it a particularly riveting watch. Certain scenes even seem to repeat themselves, like any conversation between Jane and Candy which only serves to further their intense rivalry or hint at their messy past together. Even the rare moments of sudden lunacy that fit more into its targeted satirical nature, like a drag race between two campaign tour buses, are jarring in how much they don’t fit amidst the rest of the talky flick.

The third act dives into a melancholy and wholly manipulative tone, not unlike some of the propaganda shorts the characters are shown attempting to film at several points. By then, any real investment is all but gone anyway, so the message it seems to convey has no true effect on anyone who’s still interested enough to pay attention.

Maybe this is the kind of film that probably would have been better off as a documentary, as although Bullock does her best in a lead role that’s among her strongest over the past few years, Our Brand Is Crisis lacks the crisis needed to make this a memorable experience.

Our Brand Is Crisis doesn’t do much with its political satire set-up, making an uninteresting topic even more uninteresting with a script of exposition dialogue and a third act that’s too on-the-nose, although Sandra Bullock’s strong lead performance is an undeniable highlight in an otherwise dull movie.