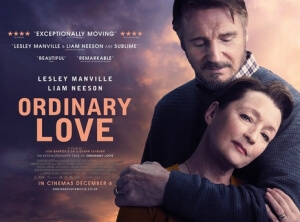 BASICALLY…: A middle-aged married couple (Neeson and Manville) find their relationship tested in the wake of some devastating news…

Foregoing the heavy dramatics of a traditional Hollywood romance, Ordinary Love celebrates the banality of a healthy relationship. Instead of third-act break-ups and forced love triangles, this film has conversations about soup, arguments about Fitbits and Brussels sprouts, and gentle walks up to and around a growing tree. It is, incidentally, a lot more genuine than some of the more recent romantic movies, and a quietly heart-breaking look at middle-age strife while it’s at it.

The movie’s central couple is Tom (Liam Neeson) and Joan (Lesley Manville), who are perfectly content with their quiet, uneventful lives in Northern Ireland, as long as they have each other by their side. Things start to change, however, when Joan feels a lump on her breast; a few mundane trips to the hospital later, the doctors tell her that she has breast cancer. Despite the severity of the situation, both Joan and Tom try to not let it dampen their spirits too much, but they must each deal with it in their own ways and, most importantly, together.

The whole thing appears to unfold over the course of a year, beginning sometimes shortly after Christmas (one of Tom’s first acts is putting away the decorations) and taking us all the way through the seasons right up to and including the next Christmas. What the movie does well in that regard is that it really makes you feel as though no time is passing at all; although sitting around in waiting rooms and hospital cafés is not what some would consider exciting, it all moves at a swift and gentle pace thanks to directors Lisa Barros D’Sa and Glenn Leyburn, who take the naturalistic dialogue by playwright Owen McCafferty – who based his script on his own experiences whilst his wife had breast cancer – and use it sparingly to paint a wider picture of not just the current circumstances but this couple’s own history, all while not outstaying its welcome. You really get a read on the amount of time that these two people have been together, in the small ways that they show affection to one another as well as how they react to certain new developments, and the directors do a very strong job of conveying the fact that both Tom and Joan clearly adore one another even when they’re not clearly showing it. There is no big Hollywood twist or contrived barrier; these people start out in love, and remain very much in love all the way up to the final moments, and it’s so wonderfully portrayed by both the directors and the writer.

None more so, though, than by the performances of Liam Neeson and Lesley Manville. Their chemistry is so on point that you truly believe that these characters have put up with each other for this long, and when the film takes time to address the raw reality of cancer treatment, from chemotherapy to double mastectomies, they don’t hold back in showing the utterly emotional toil it’s having on both of them. Neeson, refreshingly subdued, has great moments where he gets to remind people that he’s not just good for the odd action flick – a scene by their deceased daughter’s gravestone particularly stands out – but it is Manville who truly brings the house down, in a performance where you can see the blatant sadness in her face without her ever uttering a single word, and who in her most distressed moments can bring just about anyone to the brink of tears. Both are excellent in this film, delivering performances that are anything but ordinary.

The only thing that I can think of which might put some people off about the film – unless they too have had similar experiences in the past or fairly recently, which I imagine not many of them would want to go through again – is that the film has a slightly episodic format, occasionally repeating certain scenes and monologues which can throw you off a little bit. That is only a very minor fault, in a film that is otherwise worth recommending, especially if you’re a fan of these two actors who do some of their best work in ages, or even if you yourself are in a fully-committed relationship with someone and want to see a film that accurately portrays the blissful mundanity of love.

Ordinary Love is a quietly moving study of a banal but endearing relationship tested by a serious situation, which is made compelling by playwright Owen McCafferty’s caring script, Lisa Barros D’Sa and Glenn Leyburn’s generous direction, and two outstanding lead performances by Liam Neeson and Lesley Manville.

Want to decide what the movie’s like for yourself?
Check out Ordinary Love showtimes in London
via