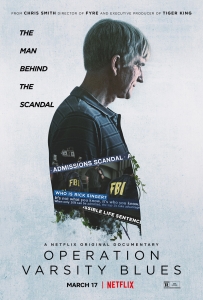 BASICALLY…: An investigative look into the 2019 college admission scandal, incorporating real footage and dramatized re-enactments based on actual phone calls…

It was a news story that rocked the world when, in 2019, it was revealed that a number of wealthy individuals, from business owners to lawyers to even actors like Lori Laughlin and Felicity Huffman, were charged with bribing admissions boards extortionate amounts of money, as well as cheating on exam tests, to get their kids into some of the country’s top colleges. Not only did it bring about a wave of criminal charges and prison sentences to dozens of individuals, but it also exposed a deep wound of privilege and entitlement that the wealthier class thought they could wield in order to get any result they so desired for their children’s futures.

At the centre of it all, though, was one man: Rick Singer, a carefully calculated individual who spearheaded the entire conspiracy and, upon getting caught, brought down some of the country’s most affluent and influential people with him. His story, and those of the people caught up in his scheme, are what filmmaker Chris Smith’s new Netflix documentary Operation Varsity Blues: The College Admissions Scandal focuses on, and it’s an explosive as well as highly informative factual thriller that leaves you utterly disgusted by how fragile the American education system is, and the easiness for it to be taken advantage of by people who think they can throw money at anything as a solution.

The movie is primarily a documentary, with on-camera interviews with numerous figures including reporters, college sports coaches and some of Singer’s former associates, but also incorporates dramatic re-enactments of actual phone calls made by Singer to his many clients, as recorded and released by the FBI. In these re-enactments, Singer is played by actor Matthew Modine, who spends the entire movie talking to other actors playing real people on the phone (which makes sense because, again, these are real conversations that were recorded via wiretapping, and to put them in any other context would have felt rather odd), and in them we see/hear the exact methods that Singer and his collaborators methodically used to get away with this kind of criminal activity for years. This, as we learn, included the rich parents of college hopefuls spending anywhere between $500K to $1 million as a charitable donation to Singer’s organisation, which he would then send on as bribes to colleges and sports coaches in order to guarantee acceptance, even if none of the kids played any kind of sport whatsoever. We also see how Singer was sneakily able to pay certain people to take kids’ exams for them, bumping their overall score up to an acceptable enough rate for them to be considered by the best institutions.

The most damning aspect of the entire story isn’t, funnily enough, the actual crime that has been much documented in the media ever since its exposure. Yes, it was a horrendous and highly illogical crime, but the film is very quick to point out the elitist system that allowed it to thrive in the first place; according to many interviewees, colleges like Harvard or Cornell carry a certain prestigious factor to them, and many people – especially those from privileged backgrounds – want to apply for them just to elevate their status, and these institutions make no secret about how they heavily favour academics who come from wealth over middle-or-lower class undergraduates, even if they are proven to be harder-working than the higher class. Operation Varsity Blues – named after the codename for the FBI’s investigation into the scandal – casts a harrowing spotlight onto the dismal nature of college admissions procedures in general, showing how it affects the mental health and wellbeing of underprivileged students who are denied a chance to attend some of these colleges because someone wealthier and in more power than them was able to buy themselves a place in their stead. While Singer’s crass exploitation of the system was nothing more than a calculated, deeply cynical scam, one cannot deny the accountability of the unfair system in and of itself, which this movie is just as critical of as the actual criminals in this story.

Filmmaker Chris Smith – who previously made waves on the streamer with his documentary Fyre: The Greatest Party That Never Happened, which covered the disastrous attempt to host the luxury music festival – refuses to toe the line when it comes to conventional documentary formats, splicing both real-life footage and the re-enactments together near-seamlessly to craft a compelling crime thriller, which makes both the presentation and the material feel a lot more unique than a more standard template. There is a real sense of theatricality throughout this entire story, as you continue to see how intricate and dirty this conspiracy becomes as it keeps going on and on without consequence, until the other shoe eventually drops. It’s paced and shot like a David Fincher film, or even a post-Wolf of Wall Street portrayal of greed and wealth that’s far less glamorising about the lifestyles of the rich and famous than Scorsese’s movie, and even as it keeps throwing all this valuable information at you from all cylinders, you’re still able to absorb it all thanks to Smith’s steady and sophisticated filmmaking.

It’s an invigorating and highly fascinating documentary that presents the whole scandal in plain sight and does not hold back on its criticisms of both the people directly involved in the scandal, and also the rigged system that it readily exposed. Singer’s methods of using a “side door” to use thinly-disguised bribes as a means to secure college positions are no match for the more accepted and yet even more problematic “back door” methods which guarantees a student a place if their parents make a sizeable enough donation instead of getting in on their own academic achievements (i.e. the “front door”). Yet again, money is the root of the problem here, and it’s actively denying those from less-fortunate backgrounds to miss out on further education and thus greater chances at life – that, Operation Varsity Blues argues, is the true scandal.

Operation Varsity Blues: The College Admissions Scandal is an invigorating and damning documentary which near-seamlessly stitches together some intriguing documentary footage with carefully-shot re-enactments to both portray the embarrassing titular scandal that rocked the world, and further expose the elitist and unfair systems in place that let such criminal activity thrive in the first place.