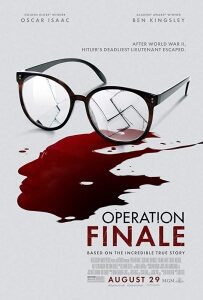 After the Second World War, several high-ranking Nazis were brought to trial for their numerous war crimes, many of them famously in Nuremburg, but only one – to the extent of my knowledge – was tried and convicted by the very people he had set out to eradicate. Adolf Eichmann, branded the lead architect of the Final Solution, was solely responsible for the deportation of several million Jews to concentration camps during the war, and was only captured whilst hiding out in Argentina, fifteen years after the war ended.

Operation Finale dramatizes his capture to the best of its ability, and while it is not without its narrative windfalls this is an overall serviceable thriller with some strong acting, interesting back-and-forths, and enough entertainment to keep you from getting too bored.

The film takes place largely from the perspective of Peter Malkin (Oscar Isaac), a Mossad agent who is tasked with leading the operation to capture Eichmann (Ben Kingsley) after his presence is alerted by a young Jewish girl (Haley Lu Richardson) who happened to go on a couple of dates with Eichmann’s son Klaus (Joe Alwyn), one of them to an actual Nazi meeting. Malkin gathers his team, notably among them Israeli intelligence officer Rafi Eitan (Nick Kroll), and heads to Argentina where they manage to eventually capture Eichmann, get him to admit his real identity, and sign a document that gives them permission to transport him to Israel for his trial.

When the film starts, it meanders between quite a few plots happening at the same time, many of them being dropped by the time Eichmann is captured; there’s the budding love story between Richardson and Alwyn’s characters that starts off like it’s going somewhere but is suddenly never brought up again after a certain point; and there is an opening scene where Oscar Isaac and his team locate and accidentally kill the wrong Nazi (the wrong guy, but still a Nazi, they conclude), which again is set up like it’s going to come into play later on but never does. There are also parts of the score, composed by the usually reliable Alexandre Desplat, where it doesn’t even seem to match the tone of the scene, like an opening credit sequence that’s showing some deadly serious imagery but is played out over music that sounds like Carrie and the girls are about to meet up again in the latest episode of Sex and the City. It makes for a rather odd first half, one that isn’t necessarily terrible but has a number of things going against it that ended up taking me out of the movie more often than I’d care to admit. The one thing carrying me through this section of the film was the acting, and with a proven leading man in the form of Oscar Isaac – who also acts as a producer on the film – as well as solid support by Kingsley and other strong character actors like Mélanie Laurent – who knows a thing or two about outwitting Nazis, just ask the people who made Nation’s Pride – there was at least that to keep my attention.

Once Eichmann is in their possession, though, the movie finally becomes more focused and direct about what it wants to do. It evolves into a situation where these people with Jewish backgrounds have to force a confession out of this Nazi without letting their own inner hatred get the better of them, and that creates an interesting dialogue between Kingsley and Isaac’s characters where both of them are trying to use their respective persuasion skills to get what they need or want, in the former’s case a final chance to see his wife before the trial, and in the latter’s case the signature that will give Israel authority to try him for murdering millions of Jews. It was also the part of the movie where I could feel that this was what it was originally setting out to do, dramatize these events whilst also making the figures on both sides empathetic and even humanised; there is a lot of writing given to Eichmann’s character here that, while you absolutely do not agree with his point of view, help you to at least see the humanity in this person, even though he’s admitting to the worst crimes a human being can make. Isaac’s character, meanwhile, is one that you can immediately get behind because he is a very charismatic lead who also brings a sense of vulnerability to the role, and that can make all the difference for a character who in anyone else’s shoes could have been portrayed as a bland boy scout.

Overall, the film is completely serviceable; nothing about it is perfect, nor is there anything awful about it, either. The direction by Chris Weitz is fine, it’s shot well enough, the writing – while certainly odd at times; there’s an entire monologue dedicated to defecation whilst Eichmann is on the commode – does its job, and like I said the acting is probably the best thing about this movie. It’s not a film I would necessarily rush out to the cinema to see – and unless you’re near one of the very few cinemas showing it, you can’t because this is a Netflix release here in the UK; which kind of makes sense, because this film is rather perfect for on-demand viewing during a night in front of the TV. At the same time, though, I’m still glad I saw Operation Finale, which had its heart in the right place but took a bit too long to actually get itself there in the end.

Operation Finale overcomes a slightly odd first half, filled with plots and characters that are very quickly dropped and almost never brought up again, with a second half that becomes a lot more interesting and sure of itself, complete with great performances all around, especially from both Oscar Isaac and Ben Kingsley.