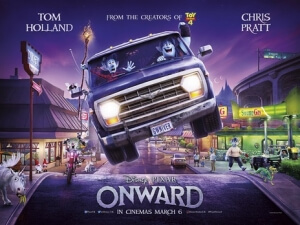 BASICALLY…: In a suburban fantasy world, two elf brothers (Holland and Pratt) set out on a quest to discover if magic still exists…

Although Pixar likes to pride itself on original ideas (for the most part), a fantasy movie set in the modern era is not a new concept. As recent as a couple of years ago, director David Ayer and writer Max Landis debuted their action movie Bright on Netflix, with the idea being that fantastical creatures such as elves, orcs, centaurs and goblins all lived in today’s timeline with modern technology and current cultural sensibilities.

The key difference between Bright and Onward, though, is that one of them sucked, and the other is a really good movie. It shouldn’t be that difficult to figure out which one is which, especially when a cretin like Max Landis is involved.

In Pixar’s version of this concept, the world used to be filled with magic and epic quests, until those were put aside to make way for modern technology. The film takes place in a suburban neighbourhood where elf brothers Ian (Tom Holland) and Barley (Chris Pratt) live with their mother Laurel (Julia Louis-Dreyfus), having lost their father before Ian was born. For his 16th birthday, the timid and socially awkward Ian receives a magic staff from him, along with a spell that can bring him back for 24 hours, much to the delight of Barley who is obsessed with the magic that is long gone from this world. However, the spell goes wrong and only their father’s bottom half is revived, leading the brothers to go on a quest together to find the items necessary to make the spell work and bring back the rest of him.

From a narrative point of view, this isn’t the highest level of storytelling that most audiences are probably used to with a Pixar film. This one is much more of a straightforward adventure movie, sticking to certain formulas associated with that particular genre, and is perhaps more geared more towards children than adults, especially in the way this world is set up and realised. However, it happens to do a lot of those elements really well; it’s action-packed, humorous, creative, and most of all fun, which is what an adventure movie should be at the very least. There are parts in this movie that are legitimately thrilling, even to a point where you are gasping when something dangerous might be about to happen, which work because the film has done such a good job at sucking you in to the story, with characters who you actually want to spend time with, and stakes which make the journey all the more poignant.

Ian and Barley are very likeable characters, voiced with charm and hubris by Tom Holland and Chris Pratt who share easy chemistry with each other that makes them feel like actual brothers, and the movie does well at establishing how different they are to each other yet feel like they were cut from the same cloth. You feel very comfortable following them on their quest because you truly enjoy being in their company, but also because their reasons for doing so are truly sympathetic and meaningful. This is where one of the film’s biggest strengths shines through, which is it’s real sense of heart; there are profound moments in this movie that are among some of Pixar’s most emotional moments since Inside Out, and a lot of that comes from the real sense of drama surrounding these two characters’ desire to reunite with – or in Ian’s case, finally meet – their father. It works because the story is paced well enough so that the audience understands enough of the context surrounding it, and it is written with a sincere edge that gives it real weight, arguably more so than other dramas designed for older audiences. It’s also a beautiful-looking movie, but given that this is Pixar that really should go unsaid by this point.

While there is a lot to admire about the film, it isn’t without a couple of missteps. For one, the film never utilises its environment as much as it probably should; take a film like Zootropolis, which really went out of its way to create a unique and sophisticated world that you could realistically see the animal inhabitants living in, whereas Onward mostly just feels a little too similar to our own universe, to a point where you could easily remove the fantasy element and not much about it would be lost. There’s also a moment towards the ending which at first is a brilliant and rather beautiful way to wrap up a certain plot thread, but then the movie just proceeds to render it redundant with dialogue that did not need to be there, which is a little bit of a shame because the moment right before it was so wonderfully done that it’s a shame it had to be somewhat undone by the one right after.

Does the movie have flaws? A couple of notable ones, yes. But none of them ever ruined the movie for me, nor did it even leave me the slightest bit underwhelmed, because the adventure that was central to the entire film was a great ride that I was enjoying immensely, and these characters as well as the emotional punch of the story was so well portrayed that I never felt like I was being let down by the animation giant. It’s a strong flick that families can easily enjoy, and any lovers of fantasy or adventure movies will certainly get their fill here; whether it’ll please the vast majority of Pixar purists still remains to be seen, but either way it’s an adventure worth going on.

Onward is a fun-filled fantasy adventure from Pixar, which might not rank high amongst the animation giant’s strongest examples of storytelling, but has enough charm, likeability and heart to carry itself all the way through, complete with a powerful range of emotions that make this adventure worth going on.

Want to decide what the movie’s like for yourself?
Check out Onward showtimes in London
via