Once Upon A Time In Hollywood (Review)

Once Upon A Time In Hollywood (Review) 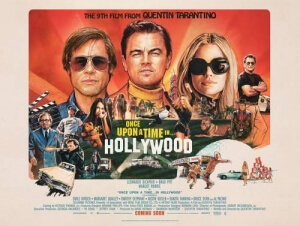 BASICALLY…: It’s Hollywood in the late 1960s, and TV cowboy actor Rick Dalton (DiCaprio), along with his stunt double and best friend Cliff Booth (Pitt), have some very interesting experiences…

Quentin Tarantino is perhaps the world’s most famous film buff, so it is somewhat surprising that he’s waited this long to make a movie about Hollywood itself. He’s certainly inserted homages to classic styles of genre from Westerns to exploitation flicks, but until now he’s never actually brought us a story about what it was like to be a part of the industry at a certain point in time. Perhaps that is why he has named his ninth film Once Upon A Time In Hollywood, because like some of the most fantastical fairy tales this is a story that dives deep into the titular kingdom and its colourful inhabitants, and takes you on a wild journey that you’ll likely never forget.

It is arguably one of Tarantino’s strongest in years, and I say that as someone who has adored the vast majority of his films, because it not only gives you everything you’d expect from one of his movies, in the best way possible – Masterful dialogue! Sudden bursts of violence! Close-up shots of women’s feet! They’re all here, and then some! – but it also feels exceptionally sentimental, like a young child gleefully running around on a movie lot, stopping every once in a while to awe at the sets, costumes, vibrant personalities of the actors and filmmakers, and all the equipment used to bring movies to life. For any film-lover out there, this is a pure cinematic delight.

The first two thirds of the film are set in Hollywood across a couple of days in 1969, as we follow the misadventures of Rick Dalton (Leonardo DiCaprio), the star of a 50s TV cowboy series called Bounty Law whose star has since faded and has been doing a number of guest appearances on several television shows, and Cliff Booth (Brad Pitt), Rick’s stunt double and best friend who is also struggling to find work. Meanwhile, we also get to follow around Sharon Tate (Margot Robbie), who has recently moved into the house next door to Rick, and is enjoying the Hollywood scene with her husband Roman Polanski (Rafał Zawierucha). All three characters are shown just kind of going about their day, either on movie sets or wandering around Hollywood or even running into members of the Manson family (as you do), who come back into play during the final third.

I won’t even dream about going into spoilers here, but when you put together ingredients such as 1969 Hollywood, Sharon Tate, and the Manson family, you can already kind of paint a picture in your head of where this movie is eventually going to lead. This being a Tarantino film, however, you should go in expecting the unexpected; this is not some mere exploitation film surrounding the real-life tragedy, but a vast and extremely engaging love letter to a long-gone Hollywood era, which the likes of Sharon Tate and Charles Manson just happen to be in. Tarantino’s vision of Hollywood in the late 1960s is a golden hotspot of stars – personalities such as Steve McQueen and Bruce Lee pop us as minor characters, played by Damien Lewis and Mike Moh respectively – and style, with everything from the cars to the clothes having their own unique charm and charisma in an environment made up of nothing but charm and charisma. As ever, his attention to the aesthetic is masterful, right down to some of the clips shown from the fictional TV shows and films within the movie looking as though they were indeed shot in 1969, despite modern stars like Leonardo DiCaprio popping up in them. Tarantino and cinematographer Robert Richardson gleefully indulge in the sun-lit streets and locations throughout the Los Angeles area, making everything look undeniably cool but also rather rugged and used, like the Western sets that DiCaprio’s Rick Dalton finds himself on, or the grimy and even eerie vibe of an abandoned movie ranch. It’s an awesome movie to look at, especially if you’re as into your movies as Tarantino clearly is, because everywhere you go you’re just blind-sided by movie posters, neon-lit signs and fancy villas where the stars go to relax after a long day’s work.

Talking of stars, Tarantino has outdone himself with the ensemble he’s gathered here, since everyone – whether they’re leads or much smaller parts – is perfectly cast. DiCaprio and Pitt are of course the larger focus of the film, and their chemistry is not unlike the classic on-screen pairing of Robert Redford and Paul Newman, which is to say note-perfect with both actors having so much fun bouncing off of one another that it genuinely feels like these characters have known each other for a long time. Of the two, Pitt is perhaps the most fun to watch here as you’re just so sucked in by the natural charisma he brings to the part that you’d be comfortable following him around for another few days, although DiCaprio is still as great as always as he has some memorable scenes sprinkled throughout, some of them opposite young child actress Julia Butters as an aspiring method actress, who manages to steal every single scene from her A-list co-star. As for Margot Robbie as Sharon Tate, she tends to weave in and out of the film and notably has less character than either DiCaprio or Pitt do, but whenever she does pop up she is delightful, her infectious smile and fun-loving attitude really making you feel the tragic loss that this character would sadly become in real-life. Be also on the lookout for Tarantino regulars like Michael Madsen, Kurt Russell, Zoë Bell and Bruce Dern (the latter being a last-minute replacement for Burt Reynolds, who passed away before he could film his part) in a few blink-and-you-miss-‘em roles, as well as other recognisable faces like Al Pacino, Lena Dunham, the late Luke Perry, and Dakota Fanning (who it’s nice seeing back on the big screen, and working with high-profile filmmakers like Tarantino) – it’s a hotspot for anyone who’s anyone in Hollywood, it seems, and it’s so much fun watching all of these actors inhabit their roles that the writer-director has carefully constructed for them.

It’s not a short movie, somewhere between two-and-a-half and three hours, but the way that this movie is paced, how well it’s written, how likeable the main characters are, you barely notice the length, and by the time it does end you’ve become so fascinated with this world and these people that you’d be fine with it going on for another hour or so. Tarantino has made an epic that’s set in a time of Hollywood epics, and out of all his films this is the one that has managed to embrace his overall love for the craft the most, which makes it perhaps the most personal of all his films, and certainly the most loving. It’s hard not to feel the burning passion in each and every frame of this film, which makes me feel sad if there is indeed one more movie left on Tarantino’s agenda (he’s been quoted as only doing 10 movies before retiring) because that way that this movie is, it’s proof that there will rarely be another filmmaker as in love with movies as Quentin Tarantino.

Once Upon A Time In Hollywood is writer-director Quentin Tarantino’s strongest film in years, as it takes the audience on a wild and extremely fun ride through Hollywood in the late 1960s with a never-ending passion for the craft of filmmaking spliced with fun turns from an appropriately starry ensemble cast. It’s an absolute must-see for anyone who’s ever loved a motion picture.