Once Upon a River (Review) – A Moody, If Slightly Flat, Coming Of Age Drama 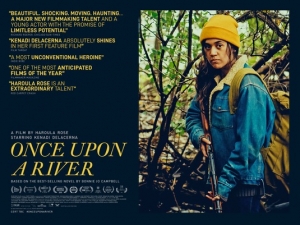 BASICALLY…: In 1970s Michigan, a mourning Native American teenager (DelaCerna) sets off on a journey along the Stark River…

In the very first scene of Once Upon a River, the feature directorial debut of musician Haroula Rose (itself adapted from Bonnie Jo Campbell’s novel of the same name), we see our main protagonist, a teenage Native American girl named Margo – played by newcomer Kenadi DelaCerna – slowly approaching a spot on the Michigan riverside, rifle in hand, aiming at an unseen (most likely animal) target. As she breathes in and out before taking the shot, she is calm, collected, and not the least bit concerned about the life she is about to abruptly end. Through some choice close-up cinematography, and DelaCerna’s enticing performance, we see that she’s clearly done this more than a few times before; she’s a survivalist, with strong skills that come very much in handy throughout the rest of the movie.

While it’s immediately clear that Rose knows how to introduce characters such as our lead using visual language to get across an idea of what kind of person they are, don’t go in expecting to learn much more about her or anyone else. Therein lies the unfortunate setback with this otherwise watchable coming-of-age drama, which has the bare bones of a solid journey of youth, told from a unique perspective that sadly isn’t seen as much in current filmmaking, but ultimately lacks vision as to where it ultimately wants to take either its inhabitants or its viewers.

Taking place along the Stark River in 1977 Michigan, we also see that DelaCerna’s Margo – roughly fifteen years of age – lives with her single father Bernard (Tatanka Means), who taught her such survival skills in the absence of her mother (who had previously abandoned the both of them), in a small offshore community run by her white uncle Cal (Coburn Goss). After a very tough-to-stomach series of events, which ultimately conclude with someone very close to the teenager sadly meeting their maker, Margo makes a break for it by heading up the river in search of her mother, and in true Mark Twain fashion, she ends up meeting a handful of interesting characters along the way, from a nice Cherokee graduate student Will (Ajuawak Kapashesit) to a cantankerous dying old man named Smoke (John Ashton), whom she starts to form a nice bond with.

Ultimately, as it so often does in films such as this, our young lead will ultimately discover one or two new things about herself, and/or feel at peace with the woman she is slowly becoming. However, the script – also by Haroula Rose – makes it hard for us to even ascertain what kind of person she is, because it is oddly light on specific details that should make us understand her even more than what we are given at face value. Aside from some cloying expository narration – which comes and goes whenever it feels like it, and really shows its book-to-film translation origins – we barely get a glimpse inside her mind, even when she experiences some hardcore trauma that would cause anyone in her situation to open up at least a little bit. Instead, she’s mostly a blank slate of a character, who we almost never feel is entirely in danger, because the film establishes her bold survival skills early on which leaves the audience to assume she’ll be fine no matter what the situation, and is someone who we know about as much by the end as we do during that very first scene.

By no means is this the fault of lead actress Kenadi DelaCerna, who still manages to deliver an impressively steadfast turn (especially for someone who is also making their professional acting debut), but even a more experienced actress would still be saddled with a lead character who’s not very uninteresting. You’re way more invested in some of the supporting characters, like the dying old man that Margo befriends, or the creepy predatory uncle that gives off every single red flag in the book, all of whom you’d honestly much rather watch a movie about than this teenager. Perhaps in the original source material, there is a lot more to the Margo character than we get in this adaptation, and you can tell that Rose must have trimmed a lot of stuff that might have been vital for us getting to understand her more as a person, instead of having her just be there and not having as much of a compelling arc as the film possibly thinks she does.

It is a well-made movie, with bleak overcast cinematography alluding to the gothic nature of the story, and again the acting is largely top-notch, but this is a script that does not entirely follow through on the promise it makes in that opening scene. There, we certainly see what Margo is, but not who she is, and that is sadly Once Upon a River’s biggest missed opportunity.

Once Upon a River is a watchable coming-of-age story with some strong, bleak cinematography and some solid performances, especially by debuting lead actress Kenadi DelaCerna, but ultimately the script lacks the necessary dimensions with its protagonist and overall story which leave us with little reason to get invested in either of them.

Once Upon a River will be available to rent or buy on digital platforms, including Amazon Prime Video, from Friday 7th May 2021.