On The Rocks (Review)

On The Rocks (Review) 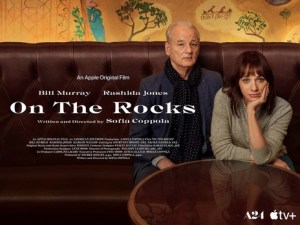 BASICALLY…: A young New York mother (Jones) finds her life thrown into doubt when she meets up with her playboy father (Murray)…

When Bill Murray lost the Best Actor Oscar in 2003 to Sean Penn, many thought that Murray – who had been nominated for his career-best turn in Sofia Coppola’s Lost in Translation – had been far more deserving of the accolade, for his tender, soulful, and characteristically funny turn as a washed-up actor alone in Japan.

The truth is, while Murray was undeniably great in the film, the former SNL cast member simply got lucky when he teamed with Coppola for her most acclaimed film to date. Since then, the actor – who famously has no agent – has mainly found himself in a number of projects with varying success, from St. Vincent to the Garfield movies, and of course countless appearances in Wes Anderson movies, few of which have been up to the standards set by both Coppola’s film and Murray’s lead performance in it.

Can a simple reunion of actor and filmmaker give Murray that much-needed push (we’re not counting that Netflix Christmas special they made together in 2015)? Well, while On The Rocks isn’t perhaps as refined a film as Lost in Translation, it’s a sweet and endearing film that plays well to the strengths of both Murray and Coppola, the latter of whom apparently based it on her own relationship with her father, veteran filmmaker Francis Ford Coppola.

Murray fills that particular role, which is very much a supporting part; the proper lead is Rashida Jones as Laura, a New York stay-at-home mother who’s somewhat overworked by her parental responsibilities, something which her caring husband Dean (Marlon Wayans) can’t help with as he’s constantly away on business. Approaching her birthday, she confides in her difficult relationship with her father Felix (Murray), a playboy of indeterminate wealth whose casual misogyny and laid-back dress style are from a completely different era; however, when she talks to him about small oddities like finding a co-worker’s wash kit in her husband’s luggage, Felix becomes convinced that Dean is having an affair, and persuades Laura to accompany him as he tails Dean’s suspicious activity.

The first film to be entirely produced under an exclusive movie deal between Apple and distributor A24 (the film will be added to Apple TV+ later this month), Coppola’s film explores the dynamic of Laura’s seemingly perfect life on the verge of breaking down, and how her weariness tends to stem from her own relationship with her father. The two aren’t estranged, necessarily, but they’re not that close either; Laura still resents his adultery from when she was growing up, and of course she doesn’t take kindly to his outdated views on women, but they’re still a unit nonetheless and respect each other enough to at least want to go out and have a couple of drinks together (a cute running gag involves her inability to whistle, while he’s at it like a songbird). It’s hard to say how much Coppola has taken from her own experiences, but there is a clear understanding of the father-daughter dynamic that only someone with experience could duplicate, and she manages to give the central relationship here a fair amount of both snark and sincerity that makes the pairing fun in its own strange way.

It should go without saying that Murray practically steals the entire movie, with his deadpan charm glistening all the way through the streets of New York (a funny scene even sees him sweet-talk his way out of a confrontation with the cops) and even as far as Mexico for one extended sequence, although this is Rashida Jones’s show and the actress is a formidable talent who easily holds her own against the comic legend. The two of them have a nice chemistry that shows the characters’ uneasy but formidable relationship blossoming in unexpectedly heartfelt and charismatic situations, from pursuing a moving vehicle to having a meaningful conversation about past mistakes. Coppola’s script presents her two leads as people who mean well, but their respective insecurities make things far more difficult for themselves as well as the people closest to them, although Coppola doesn’t go too far in making them truly unlikeable. They are simply two souls bound together for all eternity, no matter what their differences may be, and the performances from both Murray and Jones reflect their desire to cling onto whatever they have left in their somewhat empty lives.

It is a meandering film, which some people might be a little impervious towards if they want something more solid in terms of structure, and some of the conclusions land with a sudden indifference, but there is clear charm on display in On The Rocks, whether it’s Coppola’s blissfully breezy script and direction, or a couple of highly watchable turns from two very different but equally gifted actors. It probably won’t win as many people over as Coppola and Murray’s last big-screen collaboration did, but there is something to still behold when you sympathise with characters who receive a Thermomix as a birthday present (on a personal note, I found that scene to be highly amusing because, believe it or not, a close relative of mine recently received the exact same gift – and, even crazier, the exact same model – in virtually the exact same fashion, so to see it play out in a major production such as this gave me unexpected giggles for minutes).

On The Rocks sees writer-director Sofia Coppola reteam with her Lost in Translation star Bill Murray for a mellow and sweet comedy-drama that puts the talents of each of them to good use, with their respective charms – along with proper lead Rashida Jones – making up for its slightly meandering structure, which nonetheless makes for a breezy and soothing watch.