On The Basis Of Sex (Review)

On The Basis Of Sex (Review) 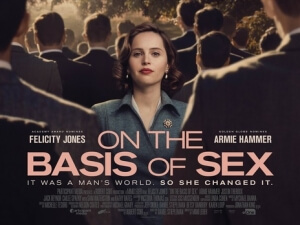 BASICALLY…: Young lawyer Ruth Bader Ginsburg (Jones) struggles for equal rights in a world that discriminates her and fellow female peers for their gender…

Supreme Court Justice and American pop culture icon Ruth Bader Ginsburg was fortunate enough to have not one but two movies about her released over the past year; however, since I never got a chance to see the Oscar-nominated documentary RBG, I’m left with On The Basis Of Sex, the dramatized account of her early career, to review instead.

That’s not a bad thing by any stretch of the imagination, because multiple films that focus on such an inspirational figure are far superior to no films about her, and the movie itself is a well-intentioned though light-hearted stepping stone for audiences who aren’t too familiar with her remarkable achievements.

We first meet Ruth (Felicity Jones) when she’s starting out as a student at Harvard Law School, one of only a handful of women selected for the institute at a time when rampant sexism and discrimination was all out in the open. She goes on to become top of her class, even filling in for her husband Marty (Armie Hammer) in his own classes when he comes down with testicular cancer, but upon entering the world of law finds herself unable to even get a job as a lawyer because of the fact that she is a woman. However, some years later, she comes across a tax court case that ruled against single caregiver Charles Moritz (Chris Mulkey) on the assumption that, because in the court’s eyes a woman is typically regarded as the one who would care for a child or elderly person, he would not be eligible for a tax deduction because he is a man and is therefore expected to be the main family provider. With this case, Ruth senses an opportunity to change the laws so that sex discrimination is effectively removed from the equation, and along with Marty and ACLU lawyer Mel Wulf (Justin Theroux) plans to put her case forward in what would become one of her first major courtroom appearances.

Looking back on it, this movie actually reminded me a lot of Marshall, the Chadwick Boseman vehicle from a couple of years ago about the early career of fellow Supreme Court Justice Thurgood Marshall; funnily enough, that movie also dealt with an early episode in that individual’s career, with a court case that the main character became personally invested in due to their heavy experience with discrimination themselves. In fact, the African-American lawyer is mentioned by name a couple of time in On The Basis Of Sex, which leads my gullible mind to believe that both this movie and Marshall are set in the same cinematic universe as each other (personally, I can’t wait for the Avengers-style team-up of Ruth Bader Ginsburg, Thurgood Marshall and other Supreme Court Justices where they team up with their nemesis Brett Kavanaugh – played, of course, by Matt Damon with a keg of beer in hand – in order to take on the Mad Titan, only here he’s orange instead of purple).

All joking aside, though, the similarities between both films don’t really get in the way of rating this film on its own merits – and also, I completely forgot I even saw Marshall until I was reminded of it whilst writing this review – and on that regard, I feel that On The Basis Of Sex does fine enough on its own. Ginsburg’s story is awe-inspiring, of that there can be no doubt, and although this film doesn’t tell as much of her story as some viewers would probably like it to (I haven’t even seen it yet, but I get the impression that RBG covers a lot more ground on her overall impact on the United States law system) it gives us enough of a taste as to what she set out to accomplish from her very early days as an aspiring lawyer. Felicity Jones’s performance here is steely and fierce, filled with fire and a great desire to do what is right so that men and women can have equal opportunities in life, and she does well to carry this film as far as she can; luckily, she has strong support from Armie Hammer as her husband Marty to help her make it through to the closing moments when it seems that there’s more than a few obstacles in her way.

Those obstacles, unfortunately, belong in the scripting department where the writers seem to have largely stuck to a certain formula that makes the film often feel like generic biopic and courtroom drama fare, instead of the trailblazing and hard-hitting movie it probably should have been. It also features characters who can sometimes come across as needlessly cartoonish when being so openly sexist, from Sam Waterston’s Harvard Law School dean who always seems to be one fiery woman-hating breath away from launching into a tirade about the recent Ghostbusters reboot, to Justin Theroux as this ACLU lawyer who I suppose is meant to be the comic relief in some scenes but is just as pig-headed as the majority of the men that Ginsburg finds herself up against in this film. In addition, the movie’s pacing feels very sporadic, a mix of the writers’ inability to think a little more outside the box during certain scenes and director Mimi Leder’s uncertainty of how to properly translate this script into moving images, which can sometimes make the film feel a little awkward in its presentation. It’s a cookie cutter movie, one that sticks to a certain design and doesn’t always allow itself enough leftover dough to play around with, which I felt could have perhaps made this film transcend beyond just being a decent movie with some strong acting and an inspiring as well as timely message.

Now, if you’ll excuse me, I’m off to pitch the Supreme Court Cinematic Universe to several movie studios – either way, it’s got to be around a lot longer than the Dark Universe was.

On The Basis Of Sex does a decent enough job of covering Ruth Bader Ginsburg’s early career as a trailblazing lawyer, though a generic and sometimes unevenly paced script prevents it from being anything above decent.