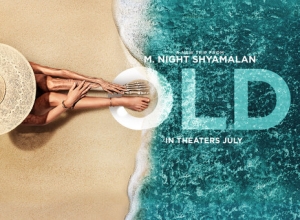 BASICALLY…: A group of families spending the day at a secluded beach suddenly find themselves aging rapidly…

If there’s one thing you’ve got to give M. Night Shyamalan’s filmography, it’s that no matter whether or not you like his movies, they are almost never boring. Of course, films like The Sixth Sense and Unbreakable (the latter being my personal favourite of his) are remembered fondly for their now-classic twists and ideas, but so are ones like The Happening, Lady in the Water and The Village for completely different reasons, whether it’s the hilariously awkward performances (Mark Wahlberg in The Happening… need I say more?) or the absolutely insane ideas that the filmmaker just randomly throws into the pile. His worst movies actually are the ones that bore rather than thoroughly entertain, specifically After Earth and The Last Airbender which contain very little of the filmmaker’s fascinating imagination, but just about everything else he’s attached his name to contains wildly intriguing stuff which, good or bad, never gets old.

Shyamalan’s newest film, which funnily enough actually is titled Old, is definitely another one of his more fascinating films, but the answer as to whether it’s actually a good or not-so-good example of his work may depend entirely on your reaction to the many, many ideas on display. Regardless, if you’re going in hoping for either another Shyamalan masterpiece or another Shyamalan WTF-sterpiece, you’re going to get exactly what you’re after.

Based on the Swiss graphic novel Sandcastle – making this only the second film in Shyamalan’s career to be based on pre-existing material, after The Last Airbender – Old is set at a luxurious tropical resort, which is visited by couple Guy (Gael García Bernal) and Prisca (Vicky Krieps), who have taken their young children Maddox (Alexa Swinton) and Trent (Nolan River) for one last family holiday before they separate. The family is taken for a day trip to a secluded beach – by none other than Shyamalan himself, fulfilling his regular director cameo duties – along with other tourists including arrogant surgeon Charles (Rufus Sewell) and his trophy wife Chrystal (Abbey Lee) and young daughter Kara (Kyle Bailey). As the day goes by, though, everyone starts to notice that they are rapidly aging at an alarming rate: Maddox, Trent and Kara are suddenly teenagers – and played by Thomasin McKenzie, Alex Wolff and Eliza Scanlen respectively – while the adults are developing aged skin and even starting to decay, physically and mentally. Everyone must now try and find a way off the beach before it can age them well past their expiry dates.

Of the many fascinating premises that Shyamalan has come up with for his movies, Old contains perhaps his creepiest and most unsettling in some time. The very idea that someone’s life can just flash by in mere minutes and hours is an extremely disturbing thought to bear, especially when there’s young children involved who in a mere instant have evolved into fully adult bodies and yet still largely have a child-like mindset. Shyamalan is clearly having tons of fun with just how far he can take his premise into some truly twisted territories, with some set-pieces involving the sudden pregnancy and birth by a character we were introduced to when they were only six, while some other characters just go completely insane on account of their rapidly deteriorating mental health. However, it never takes away from the fact that this is a premise that does send a lot of shivers down the spine, and it seems as though Shyamalan is (for the most part) aware of how sinister and even scary it all is.

For the common detractors of Shyamalan’s unique (to put it mildly) style and execution, or those who get a real so-bad-it’s-good kick out of his numerous trademarks, Old is an absolute goldmine of awkwardness. The typical overwritten Shyamalan dialogue is out in full force here, combined with extremely odd character eccentricities that could only come from this filmmaker’s mind – one of the children’s hobbies is to go to random strangers and ask them who they are and what they do for a living, as you do – and random asides during important sequences, like one character’s sudden obsession with finding out the name of a movie that Jack Nicholson and Marlon Brando starred in together, in the middle of a life-saving surgery (admittedly, there is a reason for this strange change in behaviour with this character, but that hasn’t exactly been revealed by that point, so at first it comes across as incredibly strange). A number of the performances also vary from being really strong to rather awkward, not quite to the extent of Mark Wahlberg in The Happening but still very out of place for even this bizarre world that they’ve become a part of. While you have young actors like Thomasin McKenzie and Alex Wolff who are selling their absolute horror at the situation they’re in, you’ll also get some odd inflictions from people like Gael García Bernal and Vicky Krieps who you can often tell are struggling a little bit with the English language – or at least, the English language according to Shyamalan.

There really is something for M. Night Shyamalan fans of all types in Old; you can either marvel at the sheer creativity that has gone into some of these ideas, or be baffled by the onslaught of awkwardness that comes from parts of its execution. Then, there’s the final rug-pull of a twist (because, y’know, it’s Shyamalan) which is, to say nothing about what it entails, surprising to say the least. Whether it’s really smart or really dumb isn’t the point, but it’s more about how much you’re willing to accept as a partial explanation of everything that’s going on, within the world that has already been established. For me, I was having enough fun going on this wild and intense ride of a movie, which did leave me at least open to how certain things work, despite some of it not entirely making a lot of sense. It also has the problem of having one too many endings, which undermine the impact of the previous conclusion every single time, and makes the eventual finishing line feel much further away than it actually is.

Although it brings out the best and not-so-best qualities of this filmmaker, Old is proof that while he might be hit-and-miss with a lot of people, M. Night Shyamalan still knows how to make an entertaining movie, regardless of its quality.

Old is a fascinating and entertainingly baffling new entry from M. Night Shyamalan, who brings out his best and most mockable tendencies in a film that has an incredibly creepy premise but a delightfully awkward execution.

Old is now showing in cinemas nationwide – click here to find a screening near you!