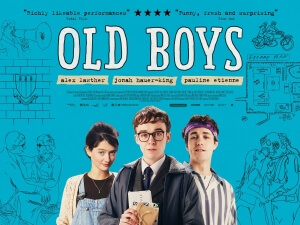 When I first saw The Imitation Game a few years ago, I remember thinking – other than how great the film was – that the young guy they got to play the youthful version of Alan Turing was so good in the few scenes he was in, that he seemed destined to become a prominent actor in his own right.

Sure enough, nearly five years later, Alex Lawther has struck gold several times thanks to further memorable roles in movies that include Freak Show, Goodbye Christopher Robin and Ghost Stories, not to mention appearances on TV shows like Black Mirror, Howards End, and especially cult hit The End of the F**king World which I’ve noticed has given him a rather big boost amongst a (mostly female) teen audience; the way his career is going so far, he could very well be the next Hugh Grant, and as someone who’s rooted for him since the very beginning I am all for it.

For now, though, Lawther is the main attraction of the quirky, well-mannered and distinctively British (with a pinch of European flavour) comedy Old Boys, which outside of its lead is a charming if slightly aloof movie with a fair amount of laughs and unexpected warmth.

In a film that’s being billed as a modern-ish – it’s set sometime in the 80s – re-telling of Cyrano de Bergerac, Lawther is Amberson, a bright but timid and scrawny pupil at an all-boys boarding school where the students are taught to be proper gentlemen – or at least, a somewhat pompous idea of what a proper gentleman should be. One day, he is approached by Agnes (an adorable Pauline Etienne), the beautiful daughter of the school’s new French teacher Babinot (Inglourious Basterds’ Denis Ménochet, a little underused here), because she is quite taken by the school’s popular but spectacularly dim sports hero Winchester (Jonah Hauer-King, in a very amusing comedic role with a hint of tragic sadness to him) and wants Amberson to pass on her affections via an artsy video message. Since Winchester proves useless with his own methods of courtship, Amberson operates behind the scenes to ensure that the school hero ends up with the girl; but inevitably, Amberson finds himself falling for Agnes as the messages between her and “Winchester” become more and more frequent.

The comparisons to Cyrano de Bergerac are accurate as well as easy to identify, not just in the similarities with the plot but also in its native origins. While the overall film is distinctively British, there are noticeable influences of French cinema sprinkled all throughout, giving off a very European vibe through the way it handles its slapstick – some of the stuff Lawther has to endure throughout feel like things that Monsieur Hulot would have gone through back in the day – and the themes of unrequited love for the hopeless romantic. These influences give debuting director Toby MacDonald and writers Luke Ponte and Freddy Syborn – the latter of whom was himself a former pupil at a public school – an extra seasoning of artistry and creativity to sprinkle on top of their work, ensuring that it reaches Wes Anderson levels of whimsy in its visual and writing style without ever coming across as a complete carbon copy of that particular filmmaker’s approach. The result is something that feels a little more unique than your traditional British romantic-comedy with a younger cast, at least in its style and approach; it’s a bit like if Netflix’s Sex Education was made by Jean-Luc Godard, or any other French New Wave filmmaker that comes to mind.

As admirable as the style and approach to this movie is, the whole thing really rests on the shoulders of Lawther, who once again is the beating heart and soul of this movie. His character Amberson is certainly much scrawnier than his bigger-built and muscular peers, and fits in with their boisterous personas about as much as a lit candle in a firework shop, but his wisdom, intelligence and especially his appetite for creativity in an educational environment where all such things are stamped out with great force are all factors that make him a winning character to root for, on top of Lawther’s naturally adorable screen presence which certainly helps us cheer for him even more. He’s game for all sorts of stuff thrown at him – figuratively and more often than not literally – in this film, from the enormous amount of physical comedy to the amusing lines he’s been given, and serves as a sympathetic focal point as we explore this very satirical take on public school life. This is a school where the teachers – such as Joshua McGuire’s bullish sports coach Higgins and Nicholas Rowe’s laughably pretentious headmaster – are even more childishly cruel than the resident bullies, the very name of the establishment’s founder prompts a ridiculous ritual every time it is mentioned in assembly, and the sport of choice is this strange concoction named “Streamers” that involves punting a square-shaped ball down a rapid river and onto a target drawn on a nearby tree stump. The intent is certainly for us to laugh at how over-the-top and needlessly boisterous the whole system is, but sometimes the movie gets a little off-track when it’s focusing on showing us such ridiculousness and not enough on the central plot; luckily, Lawther’s very likeable performance is strong enough to pull us back into the fold.

It’s a sweet little movie that’s easy to like and laugh along with, and as a vehicle for Lawther’s increasingly apparent skills it’s not a bad project to project him further onto the radar.

Old Boys is a sweet and likeable film that both borrows from and homages the most artistic styles of European cinema, but also serves as a strong vehicle for rising star Alex Lawther who’s likeable enough to carry the movie even through some of its less-focused moments.