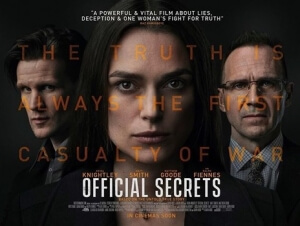 BASICALLY…: GCHQ employee Katherine Gun (Knightley) leaks to the press a memo revealing illegal practises that put into motion the 2003 invasion of Iraq…

Thank goodness that Gavin Hood has now put the woes of X-Men Origins: Wolverine behind him, and is putting all of his focus and efforts into making some thoughtful, gripping and even intense political dramas. A couple of years ago, he was kind enough to give us Eye in the Sky, a brilliant movie that combined the logistics of modern-day warfare with a genuinely dramatic dilemma that made it even more tense than the last couple of Jason Bourne movies combined.

Now, he’s back at it again with a film that tackles events from more than a decade ago, yet the themes are still very much timely and more relevant now than ever.

Official Secrets tells the story of how, in 2003, GCHQ employee Katherine Gun (Keira Knightley) comes across a memo from a top NSA agent, detailing how both the US and UK governments plan to survey several United Nations diplomats and blackmail them into supporting the impending invasion of Iraq. Gun, disillusioned with Prime Minister Tony Blair’s seeming willingness to lie about Iraq on camera, covertly leaks the memo, which soon finds itself in the hands of Martin Bright (Matt Smith), a reporter for The Observer – then having declared support for the war – who along with a few other reporters begins to dig deep and prove the legitimacy of the memo before publishing the story. However, when Gun confesses to leaking the memo and is arrested, she faces legal prosecution which she decides to defend in the name of democracy.

The film sets the story out in a straightforward manner, adapting a docu-drama feel that combines dramatizations of events as they happened with real-life footage of anti-war protests, air raids in Iraq, and both Tony Blair and President George W. Bush giving press conferences together regarding the Iraqi situation. Neither of the two world leaders appear as characters in the film, but both have an extremely high presence in a story that examines how both governments conspired to not only control this particular outcome, but effectively abused the legislation of the Official Secrets Act of 1989 in order to keep their dirty deeds from becoming public knowledge. Hood uncovers the story through several perspectives, from the whistle-blower herself to the journalists at The Observer to eventually Gun’s counsel, fronted by Ralph Fiennes as sympathetic real-life barrister Ben Emmerson, ensuring that things are kept fresh and exciting while also holding our firm attention. The director brings the same urgent energy that he brought to Eye in the Sky, albeit under wildly different circumstances, and while Official Secrets isn’t quite as gripping as that film, it still keeps you firmly invested in the story as it plays out, with some strong performances all across the board, particularly Keira Knightley who brings a profound sense of morality to her sympathetic character.

It doesn’t feel like much of a coincidence that Hood decided to make the film during this particular time in history, when both the UK and US governments are once again facing constant scrutiny and public outrage over some of their dodgy practises. Footage of the protests against the Iraqi war in this film strongly parallel some of the more recent demonstrations against Brexit, while its themes of mistruths and public discourse ring very true in Trump’s America right now; while Hood keeps the focus very much on the story at hand, it’s hard to look at how the movie portrays these things without comparing how they were back then to how they are now, and the results seem to show that, over the course of just over fifteen years, nothing has really changed. Hood definitely wants to send a message about government malpractice that is just as true now as it was back then, even going so far as to sacrificing subtlety in his approach sometimes – a late suspenseful scene involving Gun’s Turkish immigrant husband feels more like a “movie” moment than something which really happened, a little like that third-act airport sequence from Argo – and if nothing else it will leave you wandering about the state of modern politics from then up to around now.

It’s a film that does its job when it wants to tell the actual story of this real-life whistle-blower, and it also succeeds in leaving enough room for audience discussion about the topics at play, and while I can’t exactly say that I recommend it as much as I did Eye In The Sky – that movie just felt a lot more innovative, more subtle and overall more intense than this one does – I did think that Official Secrets was an overall strong movie that does leave you thinking quite a bit about what it’s trying to say. Some will undoubtedly be a little aggravated by its occasional lack of subtlety, but as long as it gets them thinking about how politics then aren’t all that much different to how things are nowadays, then this is a damn fine secret that’s worth sharing.

Official Secrets perhaps lacks the subtlety and true intensity of director Gavin Hood’s previous film Eye in the Sky, but it is still a thoughtful political drama that holds your attention as the story unfolds, with some strong performances by actors like Keira Knightley and Ralph Fiennes, and some very timely themes about government malpractice that’s bound to ring true for a lot of people right now.

Want to decide what the movie’s like for yourself?
Check out Official Secrets showtimes in London
via