DIRECTORS: Josh Gordon and Will Speck 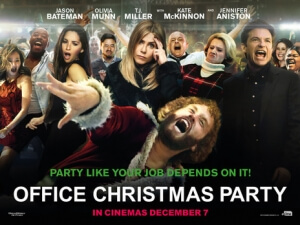 BASICALLY…: A Christmas party at a corporate office quickly gets out of hand when the employees decide to ramp up the celebrations to impress a potential client and save their jobs…

A couple of years ago, Saturday Night Live debuted a parody music video about an office Christmas party that gets a lot wilder very quickly. Its name? Office Christmas Party, and you can watch the whole thing right here:

Funnily enough, a completely separate project which happens to have that exact same premise and exact same title now arrives in cinemas, with not only notable current SNL cast members like Kate McKinnon and Vanessa Bayer as part of its much larger ensemble, but also the tone and feel of an SNL sketch that is perhaps going on far longer than it needs to. Office Christmas Party may have been in development far longer than that SNL sketch, but even then at times it feels like the long-running comedy show should sue for copyright infringement, because it turns out that they did this premise far better in a three-minute video than these filmmakers did in over 100 minutes.

The premise is that the Chicago branch of a nationwide business is under threat of being terminated by the bitchy and uptight CEO Carol (Jennifer Aniston), unless by some Christmas miracle the branch’s boss, and Carol’s brother, Clay (T.J. Miller) can impress a potential client (Courtney B. Vance) and secure a deal that would save hundreds of jobs. It also so happens that tonight is the office’s annual festive get-together, and despite Carol’s stern insistence that no parties are happening, Clay and his co-workers including Josh (Jason Bateman), Tracey (Olivia Munn) and Mary (McKinnon) rush to make it as big and extravagant a shin-dig as possible so that the client sees how fun they truly are, and will ultimately pick them. The good news is, the party ends up being crazy enough for everyone to enjoy. The bad news is, things quickly get out of control with multiple property damage, liquored-up partygoers, psychotic escort pimps, and everything you can imagine that would make a festive version of Project X.

Thankfully, Office Christmas Party is nowhere near as vile and hateful as that other heavy-partying movie, but it’s still not very good. The whole thing is basically what you’d expect it to be: a profane, slightly raunchy adult festive comedy that, despite the occasional flashes of female and male nudity as well as drug misuse and madcap scenes of violence, doesn’t really push the boundaries as much as it maybe should and ends up being an amusing but forgettable comedy for the holiday season. Parts of it do hint at perhaps a much stronger film in terms of its comedy and even its story, like certain scenes at the party itself which do seem like a bit of fun before the whole destruction phase kicks in, and some character arcs have a nice heart to them (out of everyone, Bayer’s subplot as a single mother looking for a decent connection is by far the strongest due to it being actually rather adorable, as is Bayer herself in the role), but it just can’t escape its standard feel and never really branches out into anything outside of what we’ve seen before in other movies.

The rest of the cast is fine, with Bateman doing his usual straight-man archetype which to be fair he always does exceptionally well, Aniston clearly having fun as a nastier character than she’s used to playing, and McKinnon as ever being a modern comedic genius even in scenes that aren’t entirely funny, but they’re not really given a lot to work with outside of basic archetypes and an alarming amount of forced exposition in the first act that’s clearly designed to set things up for later in the film, at the sacrifice of honest natural conversation. It ends up going a more predictable route by the third act of the film, with plot elements falling unnaturally into place to give us a climax that doesn’t really fit into anything the film had been building towards, and ending on a note that makes you wonder if the characters really learned anything at all during their wild experience.

It may not be very good festive entertainment, but next to Bad Santa 2 this is absolutely the more enjoyable party to cordially invite yourself to.

Office Christmas Party may have fleeting moments of fun that perhaps hint at a better movie, but it never quite breaks the barrier and settles for being a completely standard and mediocre adult festive comedy instead of the laugh-riot that it well and truly could have been.