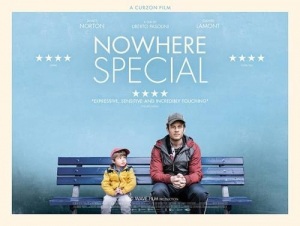 BASICALLY…: A dying father (Norton) tries to find a new family for his young son (Lamont) to stay with when he’s gone…

Director, writer and producer Uberto Pasolini took inspiration for his new film Nowhere Special from a newspaper article he read, which described the plight of a dying father who sought after a new family for his young child to grow up with once he passes away. Instead of letting the story fall into the hands of something like the Hallmark Channel, or just your average tear-jerking TV movie of the week, Pasolini rather respectfully pursued it himself, ultimately crafting a smaller and much less showy drama which, ultimately, manages to elicit more genuine emotion than had it actually been picked up by Hallmark.

The film, as the logline suggests, concerns single father John (James Norton), a window cleaner in Northern Ireland who has devoted his life to raising his four-year-old son Michael (Daniel Lamont) after the birth mother vanished from their lives. However, John is slowly dying from cancer – what specific kind is left ambiguous, because it doesn’t matter in this context – and, during the limited time he has left, is liaising with adoption agencies to try and find Michael a new family to comfortably live with. John meets with several prospective parents, some nice and some not-so-nice, all while trying to keep his son safe from the emotional complexities of his situation, which try as he might becomes more and more difficult when the inevitable starts to creep in.

A far more traditional movie would have shown the entire journey that father and son undertake together; starting off with John being the best daddy in the world, until his fateful diagnosis, and then spending the rest of the movie fighting his illness and finding a new family for his son, before turning on the waterworks for a teary third act. Pasolini doesn’t do that here, instead shifting the entire focus onto the middle section of this story, and eschewing the natural beginning and ending which, had they been included, really would have steered the movie into familiar emotional territory. The filmmaker continuously finds ways to draw poignant drama from the miniscule events that dominate his selected narrative, many of them coming from smaller moments between father and son, whether it’s simply walking together to school or John combing his boy’s hair for head lice and nits. Often, they’re lacking in substantial drama or even conflict, but that’s precisely the point; Pasolini’s intent with Nowhere Special is clearly to hone in on the relationship between these two and let the audience see, no matter how mundane their lives may be, that they have such a powerful connection that knowing what is eventually going to happen is more emotionally devastating than actually seeing it.

Key to this central relationship working as well as it does is down to the natural chemistry between James Norton and his young co-star Daniel Lamont. Norton, an actor who’s done good work in the past even when the material has been severely lacking (to this day, he remains one of the more memorable aspects of that awful Flatliners remake, even though it’s because he played such an unlikeable character in that movie), is quietly extraordinary here, opting for an emotional performance that’s more in tune with Casey Affleck’s subdued turn in Manchester by the Sea than something more showy like Will Smith in Seven Pounds, and is all the better for it as it contributes to a career highlight of a turn. His physicality feels realistically stunted as he grows weaker and weaker by the day, to a point where he can no longer lift a bottle of juice without using both hands, and the make-up applied to him really brings out the dishevelled, almost rotting exterior of his character without entirely drawing attention to himself. Most of all, though, he connects with his observant young co-star in such an endearing manner that, for a second, you wonder if the two of them are actually related in real-life (sadly not, but the fact that you’re at all unsure proves the point); a scene where the two of them are decorating a cake with endless red candles is paced and performed with such dexterity that it very nearly crosses the threshold into documentary footage over dramatized fiction.

Sometimes, the movie falls into a repetitive streak – John interviews prospective parents, he and his son spend time together, wash rinse repeat – and the overall decision as to who will end up caring for the innocent young boy might come as an easy guess. Again, though, Pasolini’s goal is not to focus on the overlaying drama but more on the now, as father and son bond with what little time they have left together, and as an observational film Nowhere Special an effective and deeply emotional experiment that’s sternly focused and superbly performed, all while remaining heavily grounded, natural, and – as its title suggests – decisively, and intentionally, non-special.

Nowhere Special is a quietly emotional drama that avoids most tear-jerking pitfalls and focuses itself on the present rather than the surrounding tragedy, and thanks to impeccable performances by James Norton and Daniel Lamont as father and son respectively, you are given a truly endearing on-screen relationship to cry over long before the inevitable happens.

Nowhere Special will be released in UK cinemas on Friday 16th July 2021, and will also available to rent on Curzon Home Cinema.