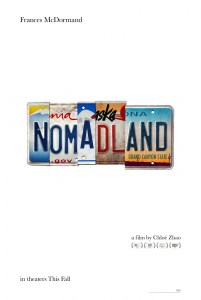 BASICALLY…: After losing everything in the Great Recession, Fern (McDormand) travels through the American West to live her life as a nomad…

This review is of the cut shown at the BFI London Film Festival in October 2020 – the UK release date is currently listed for January 1st 2021.

There are many striking things about Chloé Zhao’s Nomadland, but perhaps the most profound is how earth-shatteringly normal it is. Despite its pedigree leading lady and current position as de facto front-runner for the upcoming awards season, there’s barely a movie moment within it – no shouty emotional monologues, no crowd-pleasing character arcs, no sudden plot twists which turn everything on their head, nothing like that. Instead, it’s all so smooth and calm, taking you on a leisurely stroll through the economically challenged landscapes of Middle America, and meeting several interesting folks along the way.

Like a modern-day Grapes of Wrath, Zhao’s masterful Nomadland is a blissful study of the American working-class at its most defiant, refusing to let certain worries about homelessness or financial ruin get them down, and both examines and celebrates the nomad lifestyle as one where, despite everything, there is love and joy to be found. It is, simply, outstanding.

Our gateway into this particular world is a woman named Fern (Frances McDormand), a former teacher who faced financial ruin along with her husband and several others in their neighbourhood of Empire, Nevada (where things got so bad that the entire zip code was discontinued) in the wake of the Great Recession, and who we first meet as she’s dumping a load of household items into a storage facility. From there, she sets off in a makeshift van to live the life of a nomad, travelling across the country and finding menial work to earn whatever money she can, from a stint or two at an Amazon packaging factory to a fast food restaurant to selling several types of rocks. Along the way, she encounters several people who are also living the nomad lifestyle, and learns their reasons as to why they have adopted this way of life as well as how it fulfils them in ways a more domesticated existence never could.

Zhao rather brilliantly mixes fiction with non-fiction here, making her film feel like a healthy hybrid of both drama and documentary. Aside from McDormand, the only other professional actor in the film is David Strathairn, who plays a kindly fellow nomad that Fern keeps bumping into; the rest of the supporting cast are made up of real-life nomads, often playing slightly heightened versions of themselves, which immediately adds an air of authenticity to scenes where they are simply living their lives or having normal conversations, as though McDormand is a mere David Attenborough-esque observer who is reporting on her findings. Zhao also incorporates a lot of Steadicam shots to resemble a smooth flyover of the various landscapes our fictional lead character finds herself in, from friendly desert communities to gorgeous greenery where the buffalo wanders about freely, which additionally give the film a truly explorative feel that not many other dramatic narrative movies can provide. It’s a truly awe-inspiring piece of filmmaking on Zhao’s part, beautifully naturalistic and perfectly downplayed without ever succumbing to the trappings of either.

McDormand delivers a very different kind of performance that you’re used to seeing the two-time Oscar-winner give; it’s very downplayed, a lot more observant, but no less masterful in how she really immerses herself into this culture. She holds nothing back about its grubbier nature, including an explosive toilet incident or the lack of warmth during the cold winter nights, but she also conveys the silent joy she gets out of her new way of life, always looking noticeably more at ease whenever she’s travelling and meeting several new people, as opposed to whenever she is forced to reflect on her previous life in suburbia. She and Zhao allow the character to act as a gateway for audiences to learn more about the nomad experience, while also giving her a truly human sense of empathy, especially whenever she’s talking to her fellow nomads about their own lives, which often have some level of tragedy to them whether it’s a terminal illness or the loss of a close one. Almost every time, it leaves you utterly moved because not only are these moments powerfully acted (not just by McDormand, but by the less-experienced supporting cast who bring such real-ness to their much smaller turns), but because the way it’s shot, edited, directed and written makes it feel so much more genuine than a lot of straightforward dramas.

It’s beautifully made, wonderfully acted, and stunningly realised, but once again the most profound quality is its sheer normalcy. This is not the kind of film you go to and expect a traditional three-act structure, or even any kind of structure to be brutally honest, because it is much more about just how these people live their lives through their definition of what “normal” is, while occasionally stopping to let moments of scripted drama play out. If this kind of approach isn’t your bag, then you might not warm to it as much as I obviously did; but for those willing to stick with it throughout all of its blissful mundanity, then you’ll be treated to one of the most profound and unique films to emerge from 2020.

Nomadland is a masterful exploration of the impoverished American working-class, which filmmaker Chloé Zhao brilliantly captures through a perfect blend of drama and documentary that allows for a great amount of naturalism in her performances, among them a fantastic turn by Frances McDormand, and a sense of wonder in an otherwise menial existence.