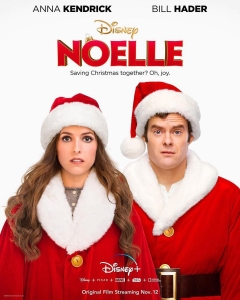 BASICALLY…: After Santa’s son Nick (Hader) runs away when he’s due to take over the family business, it’s up to Nick’s sister Noelle (Kendrick) to set things right…

This holiday season, out of all the festive classics you could choose to watch as a family, there’s a special one that takes a unique spin on the Santa Claus mythology and sets up a charming, funny narrative surrounding his colourful offspring that also features plenty of well-rounded characters and a meaningful moral about the importance of family and tradition.

That movie, if you haven’t guessed already, is Arthur Christmas. It certainly isn’t Noelle, which can’t hold a scented Christmas candle next to the similarly-plotted Aardman movie.

Having now arrived on the UK edition of Disney+ after its American debut last year, Noelle is about Santa’s well-to-do but side-lined sprog who shows a phenomenal passion for the Christmas season more than their brother who is next in line to become the new Santa Claus (again, are you sure this isn’t a Disney live-action remake of Arthur Christmas, even though that one was produced by Sony?). In this movie’s case, it’s Santa’s daughter Noelle (Anna Kendrick) who is designated to a lesser Christmas card-making job in the North Pole, while her older brother Nick (Bill Hader) is training to take over as the new Santa, which has been passed down from generation to generation in the Kringle family. Nick, however, is clearly overwhelmed by the pressure, and after Noelle half-seriously suggests taking a break for the weekend, he suddenly disappears with just days to go before Christmas, and it’s left to Noelle and her elf nanny Polly (Shirley MacLaine) to venture out into the world – specifically Phoenix, Arizona – to find him and bring him back before the holidays are ruined.

As a Christmas movie, it’s harmless enough, but also entirely disposable. The messages, characters, set décor etc are stereotypically Christmassy; everyone at the North Pole is jolly, singing carols wherever they go and working festive puns into their overall vocabulary, as though it’s one of those Hallmark Christmas movies with a far bigger budget. None of it is really unique or noteworthy compared to so many other movies set at Santa’s workshop (including as recently as this week’s The Christmas Chronicles 2), with even younger viewers – who this is clearly being aimed at – likely to find themselves a little disenchanted by its familiarity, especially when there are plenty others they could be watching instead, even on the same streaming platform as this one. It’s good for a few decent shots that certainly have the proper lighting and colour grading for a Christmas movie, but other than that it’s rather bland in its festiveness.

It’s also a very basic script that director Marc Lawrence has come up with, where every plot turn and character arc is easily predictable and even more easily resolved. You know right away what the titular character is going to learn on the course of her journey, and certainly what she’s bound to become, along with other archetypical people who follow a well-trodden path from one thing to another by the end (there’s a private detective character, played by One Night in Miami standout Kingsley Ben-Adir, who when we first meet him has – guess what? – a cynical attitude towards the holidays). It’s very sub-par material that the actors are working with, and aside from Anna Kendrick who is injecting as much perky energy as she can here, a lot of them seem to have a very restrained attitude towards it, including comedically gifted performers like Bill Hader, Julie Hagerty and Billy Eichner (the latter two respectively portraying Mrs. Claus and a tech support cousin who’s crowned the new Santa in Hader’s absence) who deliver suppressed turns that fail to grasp their natural abilities to make audiences laugh.

It’s pretty much what you’d expect a modern Disney Christmas movie to look and feel like, right down to a cute little CG reindeer sidekick designed exclusively for potential marketing opportunities (though seeing how this movie is now technically over a year old, it’s obvious that it hasn’t been quite the breakout like Baby Yoda Grogu was). Its heart appears to be in the right place, particularly in scenes such as where Kendrick’s Noelle interacts with a deaf child, though a lot of its good intentions are drowned out by lame jokes (including a frequent running gag about every single person in the world apparently wanting an iPad for Christmas, which at some point stops being a joke and starts feeling like a straight-up ad for the device) and a mild fish-out-of-water central journey. It’s definitely not the worst example in Disney’s festive catalogue, but it’s far from the best as well; a mediocre, forgettable family Christmas movie you briefly see available on the home page of Disney+ before then scrolling past it to find and play The Muppet Christmas Carol instead.

Again, if you want a Christmas movie about Santa’s family, just put on Arthur Christmas instead; it’s a funnier, more memorable film which actually explores the very nature of being the offspring of Santa Claus, and puts a lot more thought and effort into its script, comedy, characters and definitely its overall festive atmosphere. I know it seems like I’ve mentioned Arthur Christmas in this review more than I have Noelle, but honestly this movie leaves such a minor impact that better movies are all I can think about.

Noelle is a sub-par attempt at a new Christmas classic, certainly going out of its way to instil a festive atmosphere and warm messages (to the point of overkill), but its good intentions are marred by a predictable script with lame humour and elements that remind you of better Christmas movies, resulting in a harmless but dispensable family movie.

Noelle is now available on Disney+.