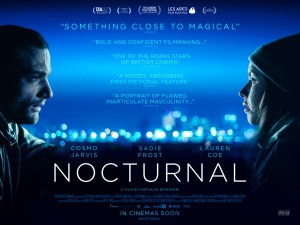 BASICALLY…: A cynical teen (Coe) strikes up a friendship with the much older Pete (Jarvis), who appears to be obsessed with her…

Following a memorable turn opposite Florence Pugh in Lady Macbeth, and an exceptional Marlon Brando-esque starring role in the criminally-underseen Calm with Horses earlier this year, musician-turned-actor Cosmo Jarvis is quickly becoming one of the industry’s biggest secret weapons, with his easy charisma and exceptional emotional range giving him a classic movie-star vibe but with a homely, more down-to-earth twist.

His screen presence illuminates the screen once more in Nathalie Biancheri’s Nocturnal, a film which utilises the actor and his natural abilities very well indeed, and proves he is indeed on his way to even greater things. The movie itself, though, is a bit more of a mixed bag; likely to creep some out over its suggestive material (at first, anyway), and relying a bit more on kitchen-sink drama clichés in its second half, Nocturnal is a decent enough film, but it’s not hard to find certain flaws on a closer look.

Jarvis is Pete, a handyman in his early 30s who lives a muted, emotionally-stunted existence in a quiet Northern England seaside town. His path soon crosses with Laurie (Lauren Coe), a cynical teenager who’s recently moved into the area with her mother (Sadie Frost), and he appears to take a shining interest in her, watching from afar as she practises cross-country at the local track. Nonetheless, Laurie starts to befriend him, and the two of them start hanging out, drinking, doing drugs and going to clubs. It seems that a relationship with a concerning age-gap is about to blossom – only for Pete’s real intentions to come out in full emotional force.

Said twist is perhaps best left for you to decipher for yourself, but when it becomes apparent what’s the real picture about halfway through, it’s brilliantly portrayed with a carefully chosen collection of dialogue, some choice unbroken close-up shots, and of course some brilliant acting from Jarvis to convey the severity of the situation. It honestly took me a little bit by surprise, especially when I began putting the pieces together, and suddenly it made nearly everything that came before have a much more solid reason for being (i.e. slightly less creepy than you might think). The reveal will probably make or break the film for some people, because it can be seen as stripping away any ambiguity that the first half of the film spent so much time setting up: why is Pete apparently so obsessed with this teenage girl? Why would someone with such a dismal view of the world such as Laurie even want anything to do with this older guy? These are questions that are neatly resolved by this reveal, and what follows can be interpreted as a melodramatic set of events that don’t always follow through on the promise built up beforehand. Personally, I didn’t think it ruined the film, but it did dampen the overall impact with a situation that was a little less interesting than what was being implied beforehand. I was a little more invested in seeing where this concerning relationship between a teen and an older man was heading before it’s revealed, and then once it was then it became a collection of plot element that have been done many times before.

Again, though, if you’re going to go with certain clichés then the execution has to be strong enough to elicit a decent response, and thankfully the film is sensitively made by Nathalie Biancheri, who incorporates a lot of long-take scenes where you can feel the tension and drama brewing in real time. Shown in a boxed 4:3 aspect ratio, the film isn’t so much claustrophobic as it is desperate to break out, and Biancheri captures both her lead characters’ yearning desire to ditch their sleepy, close-knit local community for greater pastures through some smooth editing and a couple of moody night-time shots of a town drenched in neon, yet completely empty underneath the surface. Then, of course, there are the two central performances who hold everything together, from Lauren Coe’s wise portrayal of a world-weary teen eager for some sort of connection, to of course Cosmo Jarvis who, along with many of his other noteworthy performances in the past, excels at portraying the heart and soul of his deeply flawed character. Both share a sweet chemistry, particularly in scenes where they get extremely high on drugs and alcohol and become akin to a couple of idiotic schoolgirls, and individually – Jarvis especially – they harbour great arsenal for making you care about even the lowliest of people.

While a Jarvis vehicle like Calm with Horses is perhaps a tighter and slightly more ambitious film than this, Nocturnal is still a massive testament to the actor’s incredible range that, again, makes him an increasingly fascinating performer to look out for. It’s worth watching just for his strong magnetism alone, but the film has numerous other qualities such as its sensitive direction and some intriguing use of cinematography to make it at least a decent single viewing. It’s not always solid, and it perhaps relies more on certain conventions than really branching out on its own terms, but it’s a solid enough movie to check out if you want to see what a phenomenal talent Cosmo Jarvis truly can be.

Nocturnal is a fairly solid drama that is benefited largely by sensitive direction by Nathalie Biancheri, who incorporates some carefully chosen long-take scenes to let drama boil for as long as it needs to, and a couple of strong central performances, especially by the always-fascinating Cosmo Jarvis, although a mid-way twist paves the way for a story that’s not as interesting as the one being implied beforehand.

Want to decide what the movie’s like for yourself?
Check out Nocturnal showtimes in London
via