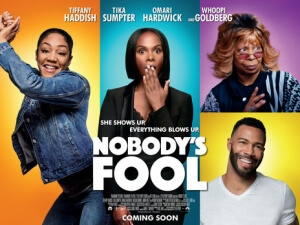 BASICALLY…: Recently-paroled Tanya (Haddish) tries to help her more successful sister Danica (Sumpter) when she suspects her online boyfriend is catfishing her…

The only other time that Tyler Perry, the one-man industry titan who has directed, written, produced, and often starred in dozens of profit-turning movies including Temptation, The Single Moms Club, and most notably the Madea series (in which he features as the cantankerous elderly woman of the title), has unleashed one of his films in UK cinemas was all the way back in 2010. That was with Why Did I Get Married Too?, a sequel to a film of his that also never got a cinema release (though it did quietly make its way to DVD at some point, as have virtually all of the other movies he’s made when released over here), which must have not done all that well at the UK box office because it’s taken him eight years to bring out a new film to our cinemas.

I’m rather disappointed that the UK isn’t as privy to Tyler Perry’s line of work, especially when I hear that most of them fall right into the so-bad-it’s-good category, with his dramas often earning bigger laughs than his comedies, and the sheer incompetence in his filmmaking style that causes critics to momentarily forget how movies work. People in my line of work need bad movies like his to write endlessly about, and up until now UK critics like myself have not been able to do so – but luckily, with the UK theatrical distribution of his latest film Nobody’s Fool, us Brits finally get to have a chance to gnaw at the absolute insanity of a Tyler Perry movie, and if ever there was a good starting point for us to tear his movies apart, it’s this absolutely confusing and unholy experience of a flick.

The film is about Danica (Tika Sumpter), an ad executive who’s deep into a relationship with a guy named Charlie who she has yet to meet as he apparently works on a distant oil rig, and only communicates with him over the phone and by text. However, when her rambunctious sister Tanya (Tiffany Haddish) is paroled after a five-year stint in prison, and Danica brings her back to her apartment to stay, Tanya starts to become suspicious that Charlie might not even be a real person, and that whoever “he” really his may actually be catfishing Danica. While she investigates this possible fraud – with the help of the actual hosts of the popular MTV show Catfish – Danica is admired from afar by local coffee shop owner Frank (Omari Hardwick), who by all accounts is a pretty decent guy, but there’s just one small problem: Danica is an absolutely terrible person.

No joke, Tika Sumpter’s Danica is one of those leads who you’re entirely rooting against, because throughout this whole movie she treats almost everyone with utter contempt, especially Frank who she constantly berates and belittles every chance she gets. She finds out at one point that he served a stint in prison and is a recovering alcoholic, and then decides that she’s not worth his time because of those reasons alone, refusing to even acknowledge his niceties at every turn. Later, when they do become physically intimate with each other – in an oddly erotic sex scene that feels like it’s something from a softcore porno on Skinemax – she immediately afterwards gives him the cold shoulder by telling him to leave, and then declaring over the phone to her friend that she doesn’t even like the guy, all while he’s still there. She spends the whole movie being such an inconsiderate, self-centred monster that you honestly wonder why this guy, or any other person in this movie, would want her in their lives in any capacity, especially when she’s screaming at them for just the smallest of discrepancies or not being exactly the kind of person she wants them to be. Unfortunately, we have to spend the entire movie with this awful person as our lead, being terrible to every person she comes across, including her sister, her mother (Whoopi Goldberg), and this poor guy who can do so much better than going after this terror of a woman.

It’s hardly Tika Sumpter’s fault that her character is so unlikeable, because Perry has failed to provide her or anyone else in the cast with a coherent script to work with (except for Omari Hardwick, who is actually really good in this as Frank), and doesn’t appear to have any kind of directorial power to reign in their performances because so many of them go so wildly over-the-top that they never seem real. Tiffany Haddish gives an especially unleashed performance in this that has her go off on several tangents without any sense of focus or direction, essentially doing a stand-up routine in the middle of a completely unrelated scene, and acting really crazy just for the sake of being crazy with little method to her madness, it seems.

Perry apparently didn’t do anything to calm her down whilst on set, which goes to show how little he seems to care about getting an actual performance out of a person, instead just letting them go dangerously over-the-top in their comedy and then just using all of that material without even editing it down. His direction is bizarre, as characters will be talking in an office setting, and then it will cut to them walking outside the building, continuing their conversation from where it left off in the previous scene; did they just walk in silence from their office all the way down to the ground floor before then continuing their conversation? Odd things like that, not to mention his confounding ideas of how the advertising industry works – Sumpter’s character is given a task to come up with a new slogan for a perfume, and the one she ends up choosing is the worst possible one, yet is seen by everyone as absolutely perfect – as well as a whole variety of everyday things, make this an exceptionally odd viewing, because you just can’t quite fathom how someone who has effectively made himself worth over a billion dollars, could also make the most incoherent movies that get enough of a wide release to show it in cinemas internationally.

I’ll be honest, I look forward to the prospect of more Tyler Perry movies coming our way in the future, because while Nobody’s Fool is certainly a bad movie, it’s a fascinatingly bad movie by a filmmaker known to frequently produce films of this quality  with nobody to tell him “no”. Hopefully, there’ll be more of his movies coming to UK screens, so I can examine his odd, but unique, approach to the language of film more regularly, but for now this is a jaw-droppingly bizarre one to start off with.

Nobody’s Fool is a confounding and bizarrely bad movie that gives UK audiences a taste of Tyler Perry’s questionable filmmaking skills, including an unhinged cast that is given neither a strong script nor focused direction to work with, and a lead character who is incredibly unlikeable and deserves none of the audience’s sympathy.