Nobody (Review) – Is Bob Odenkirk Our Next Great Action Hero? 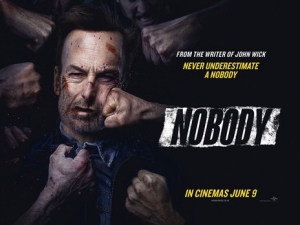 BASICALLY…: A seemingly-normal suburban family man (Odenkirk) unleashes his pent-up rage when he is targeted by the Russian mob…

Forget about any John Wick comparisons for a moment – and trust me, there’s more than a few to make – and consider the real question surrounding Nobody: can Bob Odenkirk, the comedian and acclaimed star of both Better Call Saul and its parent show Breaking Bad, pass off as a legitimate action hero? After all, Hollywood has given us plenty of unlikely actors taking on big action-heavy parts over the years, so it’s not out of the realm of possibility that Saul Goodman himself (or Jimmy McGill, if you’re following the other show) would trade the scene-stealing wisecracks for guns and car chases.

The answer, though, is an emphatic “yes, he can.” Odenkirk absolutely nails the transition from schlubby supporting player to an all-out badass, in a hugely entertaining action film that works extremely well beyond just the intriguing casting.

Odenkirk plays Hutch Mansell, a seemingly-average suburban dad who lives through the same routine week after week: he gets up, goes to work, interacts with his wife Becca (Connie Nielsen) and kids, goes to bed; wash, rinse, repeat. One night, a couple of thieves break in to their house, but Hutch hesitates to take them down, leaving him less respected by his family and neighbours; however, when his young daughter (Paisley Cadorath) notes that her “kitty cat bracelet” has gone missing, Hutch goes out to get it back and eventually ends up in a brutal bus fight with a gang of drunken Russian thugs (as you do). Turns out, though, that Hutch picked the wrong fight; one of the thugs is the brother of psychotic night club owner and Russian mob boss Yulian Kuznetsov (Aleksei Serebryakov), who seeks bloody vengeance on Hutch – who so happens to come from a past career of assassin work – and soon, it’s an all-out war between one man and the Russian mob.

As I mentioned earlier, there’s plenty of comparisons to make between Nobody and John Wick. Not only are both movies about retired hitmen who face off against Russian mobsters after being unceremoniously called back into action (though in this one, nobody kills a dog for that to happen), but both just so happen to be written by Derek Kolstad, who as I mentioned during my reviews for his episodes of The Falcon and The Winter Soldier really has a knack for world-building and giving us enough information about certain characters without going too overboard in the exposition. Kolstad, along with director Ilya Naishuller – here doing a far better job at directing coherent and digestible action than he did with Hardcore Henry – does some really fun things with an admittedly familiar set-up, whether it’s leaning gently into the mythos surrounding Hutch’s past and the people he used to work for (in a funny running gag, anytime he tries explaining things to defeated adversaries, he’s always interrupted by nature taking its course), or making both the heroes and villains feel equally intimidating and unpredictable while also giving them unique, interesting personalities. It’s all done differently enough to set itself apart from Kolstad’s other film, leaving only a couple of anecdotal details to make you ponder if both movies perhaps share the same cinematic universe (and if that’s true, then seeing Odenkirk’s Hutch face off against Keanu Reeves’ John Wick in a future instalment would be nothing short of amazing).

Naishuller also gives Kolstad’s script a real liveliness to its soul, one that certainly goes hardcore in the action scenes but also displays a legitimate sense of humour that really establishes a unique personality. There are numerous moments in Nobody that are seriously funny, from certain line deliveries to the smallest sight gag, but the movie never leans too hard into its comedy to a point where it becomes more like a spoof of something like John Wick. In fact, there are moments of violence in this movie that rival horror movies with some of its gore, including one scene where the main villain just rips a guy’s face off with a broken glass out of nowhere, and another where he just throws a chair straight into another guy’s head; even our hero isn’t afraid to get bloodthirsty, and he really does land several shocking blows on his assailants while also sustaining rough injuries himself (which is another welcome dab of realism; he’s a retired hitman, but he’s not immediately perfect at returning to fight choreography). That isn’t even beginning to mention what Christopher Lloyd, in a supporting role as Hutch’s elderly father, ends up being a part of later on in the movie, but rest assured it’s rather glorious when he comes into his own.

For all of the film’s wild successes with making a tried-and-tested formula feel fresh and exciting again, as well as its great ability to deliver exciting action and offer interesting characters in an equally-intriguing world, it really is Bob Odenkirk who pulls it all together. You have absolutely no problem buying him as an action movie lead, because he’s not only got the physicality and agility for a part like this – and it looks like he lost a bit of weight and bulked up a little for this movie, which is also pretty cool of him – but he also nails the gruffness in his voice which doesn’t ever come across as an act, and he’s got great comedic timing for some of the film’s funniest moments which do a good job of grounding this character in reality (or, at least, this movie’s version of reality). Odenkirk brings both menace and likeability to the part, both of which feel genuine and passionate while also setting himself far apart from Keanu Reeves and his own Kolstad universe – though, again, I would pay good money to see the two of them face off in the future.

All in all, Nobody is one of the stronger action movies in recent memory, because it really has some great, energetic sequences that drive out both the intimidation and the humour of the overall set-up, and it has characters who are fun enough to keep you invested as it moves from one set-piece to another. It’s brutal, it’s funny, and most of all it’s incredibly entertaining – all the ingredients you need for a classic big-screen action outing.

Nobody is an incredibly entertaining action movie that benefits from a fun script by John Wick writer Derek Kolstad (who sets this one apart enough for it to feel the right amount of different), lively direction by Ilya Naishuller, and a hugely capable action lead in the form of Bob Odenkirk, who’s both intimidating and likeable all at once.

Nobody will be released in UK cinemas on Wednesday 9th June 2021 – click here to find a screening near you!