No Time To Die (Review) – It’s Finally Out, But Was The Wait Worth It? 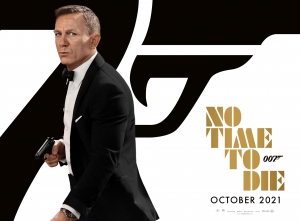 BASICALLY…: James Bond (Craig) is called out of retirement to stop a deadly plot that threatens mankind…

The wait for No Time To Die, the twenty-fifth overall James Bond movie and Daniel Craig’s fifth and final outing as the character, has been – in the mildest of terms – absolutely excruciating. The initial seven-month push from its original April 2020 release, just days after tickets went on sale, was the moment a lot of us realised this COVID-19 pandemic was serious, and the further delays that followed had crippled exhibitors plans for their glorious re-opening (Cineworld announced it was temporarily shuttering all its locations after the news that it was once again on the move from November 2020), and left desperate audiences starved for content. Even I was struggling so much that my 007 retrospective series of reviews, timed for its ill-fated November release last year, came from both a sense of lockdown boredom and a desire to do something, anything Bond related in 2020.

After all this time, though, our hopes still rested on this movie. With all the pandemic delays and even its extensive production woes – from Danny Boyle departing as director, to on-set ankle injuries – virtually everyone in the world had faith that, no matter what, this would be worth it. Simply, it’s not that we wanted this movie to be good, but that we needed this movie to be good.

Thankfully, our needs are met with a pretty strong Bond movie that’ll please just about every 007 aficionado, and a fitting send-off to one of the most exciting actors to have played the part.

We pick up on Craig’s Bond shortly after the events of SPECTRE; he and his new lover Madeleine Swann (Léa Seydoux) have travelled to Italy in his iconic Aston Martin DB5, ready to settle down with each other. However, an unexpected attack by SPECTRE agents forces Bond to sever ties with Swann, after he accuses her of betraying his whereabouts to the criminal organisation’s head Blofeld (Christoph Waltz). Five years later, Bond is living the quiet life in Jamaica until he is approached by his old CIA ally Felix Leiter (Jeffrey Wright), who seeks his assistance in locating a scientist named Obruchev (David Dencik) whose bioweapon Heracles has the ability to rapidly infect and kill people based on their DNA coding. Bond’s mission puts him on a path that not only sees him encounter vengeful terrorist Safin (Rami Malek) and his nefarious plans for Heracles, but also some friendlier faces like M (Ralph Fiennes), Moneypenny (Naomie Harris), Q (Ben Whishaw) and, slightly more awkwardly, Madeleine. Oh, and there’s also new agent Nomi (Lashana Lynch), who has been assigned the 007 codename in Bond’s absence, and does not exactly take kindly to her predecessor suddenly showing up to jeopardise her own mission.

No Time To Die is jam-packed with Bond traditions, from the dastardly villain plot which even comes with its own island lair, to henchmen with unusual features like a bionic eye, to the occasional quip and pun from our ever-charismatic hero (also, listen out for more than a few audio call-backs to On Her Majesty’s Secret Service, which makes sense when you watch the film). No matter how familiar the trope, they’re all executed exceedingly well thanks to director Cary Joji Fukunaga’s firm grasp on the action, which keeps the entertainment factor running strong all the way through its epic two-hour-and-forty-three minute running time (making it the longest Bond outing by a decent margin) while also allowing enough time for characters to breathe and not be too bogged down by endless exposition, which the film occasionally dabbles a bit too much in. Nonetheless, Fukunaga has fun diving into this world and gives the set-pieces and dark, grungy look – boosted by cinematographer Linus Sandgren – its own voice while also feeling very much part of Craig’s universe.

Speaking of whom, if No Time To Die accomplishes anything with flying colours, it’s in sending off Daniel Craig’s interpretation of the character in satisfying and well-rounded style. In arguably his best performance in the role, Craig mixes up his steely, cold-blooded approach with extra shots of humanity, presenting a James Bond who is physically and psychologically tested like he never has before, but with added years to both his face and his wisdom which lends a sense of maturity to this once brash and impulsive interpretation. All the hanging threads from Casino Royale onwards are tied up, leaving Craig’s Bond to encounter some very different and unexpected challenges that no other incarnation has yet gone through, which makes it consistently exciting and even unpredictable, especially as some very familiar faces start dropping like flies. Guiding us on this emotional and bittersweet journey is Craig, who makes the most of his final appearance in the role and leaves big shoes to fill for whoever ends up taking on the role next.

The film is not without its faults, like even the best Bond movies; it sometimes does feel its extended length, particularly in a middle section that leans too heavily into exposition over action, and Rami Malek’s villain, despite the actor’s creeping efforts, is underwritten to a point where you seriously wonder what his beef is beyond a certain point. Some characters will also get the short shrift to keep a slightly tighter pace, like Naomie Harris’ Moneypenny who unfortunately has nothing to do for most of the movie, and Ana de Armas’ perky new agent Paloma who scores some good laughs with her Marilyn Monroe-esque delivery (which makes sense since she is lined up to play Monroe in the upcoming Blonde) but drops out of the movie completely after her one big sequence. Also, without going into too much detail, it will be interesting to see what Bond aficionados make of this movie’s conclusion, which does some incredibly ballsy things but with a slight corniness in some of the dialogue.

Again, like 90% of Bond movies, the flaws do not get in the way of the pure enjoyment of watching No Time To Die on the big screen, which is enough to make this agonising extended wait all the more worth it. Most of all, it’s the perfect send-off for Daniel Craig’s fascinatingly complex take on James Bond that will be hard for anyone in the future to replicate. Nobody did it better.

No Time To Die is a thrilling conclusion to Daniel Craig’s run as James Bond, and a highly entertaining 007 movie in its own right with the familiar traditions present and correct in a film that occasionally feels its extended length.

No Time To Die is now showing in cinemas nationwide – click here to find a screening near you!