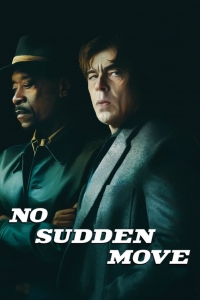 BASICALLY…: In 1954 Detroit, a group of criminals must work together to figure out the mysterious circumstances that brought them together…

While Americans lucky enough to have an HBO Max account have been able to stream it for free, us lot in the UK – where the service is unlikely to launch for at least a few years, due to a licencing agreement with Sky which doesn’t expire until 2025 – have had to shell out money just to watch No Sudden Move, the new crime caper from director Steven Soderbergh, at home instead of the cinema.

While the notion of paying to watch this film isn’t exactly a knock against the film itself, it is nonetheless underwhelming to see a pretty entertaining movie like No Sudden Move go straight to on-demand over here, when a theatrical experience would have made this an interesting film for audiences to absorb without any distractions. However, part of me also understands why a home release was probably more viable for this movie, for its rather complex plot requires a bit more analysis than just the simple cinema viewing.

Set in 1954 Detroit, we open as gangster Curt Goynes (Don Cheadle), who has recently been released from prison, is given a new assignment from shady operative Doug (Brendan Fraser): he and fellow gangsters Ronald (Benicio del Toro) and Charley (Kieran Culkin) will visit the home of General Motors accountant Matt (David Harbour), and babysit his wife (Amy Seimetz) and children (Noah Jupe and Lucy Holt) while Matt obtains a secret, and highly valuable, document from his boss’s safe. Inevitably, though, the plan goes south as Curt and Ronald realise that they have been set up, and so they attempt to find out who it was that truly hired them for this dead-end mission, and also what exactly is in this mysterious document, along with how much it may actually be worth.

Looking back upon Soderbergh’s past crime capers, from the Ocean’s trilogy to as recently as Logan Lucky, there is a reasonable focus on the “why” and “how” of the central offenses, whether it’s a Robin Hood-like takedown of the wealthier classes, to get revenge on certain individuals or, in Danny Ocean’s case, just because he can. The formula is slightly shaken with No Sudden Move, for its characters are predominantly just out for themselves, with the “why” and “how” coming more from a place of curiosity than genuine intrigue, and are always plotting four steps ahead of everyone they come across, even the people they’re working alongside. Betrayal is a major theme of this movie, as not only will people like Don Cheadle’s Curt be scheming with other mob bosses in anticipation of a back-stabbing by Benicio del Toro’s Roland, but slightly more innocent people like David Harbour’s Matt are revealed to be having affairs with secretaries, and in a much more political sense the black community of Detroit is starting to be forced out of their neighbourhoods to make room for early-days gentrification. There is also, naturally, a strong vibe of corporate corruption involving some of the big motoring companies in Detroit, which is where Soderbergh also gets to convey some damning economic commentary via Ed Solomon’s script and a particular extended cameo by a regular actor in the filmmaker’s work.

There is certainly a lot going on in No Sudden Move, with themes and sub-plots galore (I haven’t even mentioned the fact that Roland is having an affair with mobster Ray Liotta’s wife, played by Uncut Gems breakout Julia Fox), but Soderbergh wrangles it all together in a narrative that consistently holds your attention, casting actors who have strong enough screen presence to deliver intricate dialogue, and filming it in a bizarre, yet intriguing, visual style. Regarding the latter, Soderbergh (who also serves as cinematographer, under the pseudonym Peter Andrews) has chosen to capture the film with wide-angle lenses, breathing an other-worldly quality in this otherwise grounded and gritty crime thriller, as actors and sets will look slightly warped as the camera pans across rooms and other locations. Though the style tends to slightly distract (there is no immediate reason as to why the film is made like this, other than to, again, seem surreal in a movie that doesn’t entirely call for it), Soderbergh does his best to not draw too much attention to it, especially when there’s a great plethora of actors lined up for parts in this. Beyond Cheadle and del Toro, esteemed character actors like Brendan Fraser, David Harbour, Amy Seimetz, Ray Liotta, Jon Hamm (as a police detective in another sub-plot of the movie), Bill Duke and the late Craig Grant all pop up in memorable roles, and often stealing scenes with some rather funny approaches – Harbour in particular has some hilarious moments as he’s forced to roughen up his boss – and intimidation from simply just being sat down for an entire scene. The actors all do fine work with this twisty genre script by Ed Solomon, all under Soderbergh’s characteristically punchy direction.

As far as the filmmaker’s crime capers go, though, No Sudden Move might not be as immediately outstanding as something like Ocean’s Eleven, for it perhaps leans a bit too hard into its murky atmosphere and gritty film-noir vibes to just simply be fun. There is certainly plenty of entertainment to get out of these actors and the slowly unfolding plot along with its many subtexts, but there also lacks a thorough party which the audience feels comfortable rooting for; for all the coolness of del Toro’s Roland, he is also a pretty hardcore racist, demanding that Curt sit at the front of the car upon their first meeting, while even David Harbour who goes through some rough patches throughout this movie is grippling with infidelities and insecurity. However, Soderbergh does very well with the aesthetic and overall engagement of the story that you’re comfortable nonetheless spending time with these morally questionable people.

Sure, we may have to pay for it at home, but No Sudden Move is just about worth the price.

No Sudden Move is an entertaining crime caper from director Steven Soderbergh, who crams in plenty of characters, sub-plots and subtextual themes into a consistently engaging script brought to life by the filmmaker’s intriguing visual style.

No Sudden Move is now available to rent/buy on digital platforms, including Amazon Prime Video.