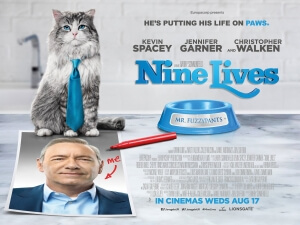 BASICALLY…: Successful businessman Tom Brand (Spacey) finds himself trapped in the body of a cat, and must learn to reconnect with his family before it’s too late…

Remember when Tropic Thunder opened with a series of fake trailers for films that looked so bad that they might actually exist in the real world? Imagine a whole movie that was just like that… only if it wasn’t meant to be satirical.

Nine Lives, the story of a businessman played by Kevin Spacey who becomes trapped inside the body of a cat, and must reconnect with the family he has put aside to focus on his career, is a film that should have come out twenty years ago, or at least fifteen. Yet, here we are, reviewing it as an actual film on this website in 2016, when talking cat movies have all but gone extinct (and for good reason; have you SEEN A Talking Cat!?!), and the only way they get any respect is if they indeed satirised it in comedies like Tropic Thunder or 30 Rock. In this case, though, it simply IS one of those movies, no self-referential winks to the side here. It is a talking cat movie with ACTUAL actors like Kevin Spacey and Jennifer Garner, an ACTUAL director with Men in Black’s Barry Sonnenfeld, and an ACTUAL major Hollywood studio budget of $30 million to make it, you guessed it, an ACTUAL movie.

It goes without saying that Nine Lives is exactly as bad as we’re leading it on to be, but not only does it utterly fail as a movie in this day and age, but even if it were released back when it was appropriate, it would have still been absolutely terrible.

The plot is incredibly clichéd and generic, the same kind of “overworked father must spend more time with his family, via some wacky situation” template we’ve seen over and over and over again in low-grade family movies like this. However, this script – passed around to FIVE different writers if you can believe it – makes zero effort to be anything other than a dumb family movie about a talking cat. It is never funny, never charming, nor is it even culturally relevant, since there are gags at the expense of George W. Bush, a figure that anyone under the age of ten or twelve SURELY knows all about. Not a peep was made out of the children at our screening, who seemed bored to tears because aside from none of it being funny, a large chunk of the movie is made up of business meetings and complicated architectural lingo (something about building the world’s largest skyscraper? Honestly, it’s not worth caring about). It’s not appealing to kids all that much, and it’s too boring for even adults – it seems as though it’s made for no-one, except for critics such as this one to pick it apart like a corpse made out of pulled pork.

Sonnenfeld, no stranger to bad movies like Wild Wild West and RV, seems to know that he’s stuck with a Frankenstein’s Monster of a script – again, it took FIVE writers, folks – and directs with such lifelessness that makes those other films look passionate by comparison. He may have had some bad experiences with making terrible films before, but here it looks like as though he just finally gave up; everything from the framing to the editing to especially the visual effects is so awkward and half-assed, that it’s a genuine surprise that the credits aren’t typed out in Comic Sans to round out the laziness. As a former cinematographer to the Coen Brothers, he should be ashamed of how this film looks with its truly abysmal camera work (a conversation between two characters continues when one of them walks off the screen, because the camera is fixed in one position and can’t be bothered to move around slightly) and some absolutely terrifying CGI, particularly on this cat which can turn into a freakily rendered cartoon whenever it needs to perform any kind of dangerous stunt. The editing is weird too, as some scenes can come to an abrupt end, while others feel stitched together like the re-animated corpse that it is. It also seems to give the characters some incredible teleporting powers, such as when Spacey is on top of a skyscraper and says he needs to get to his office, and the film proceeds to do a one-take zoom from the skyscraper to the office, and then he’s just suddenly there. Either he’s The Flash, or it’s some really dodgy and unintentionally hilarious editing at work here. Whatever the truth may be, it’s still a terribly made film, one that Sonnenfeld seems to have sabotaged single-handedly once he figured out what he signed up for.

The odd thing is, we can’t really say the same for the cast. Like you, we have no idea why Academy Award-winner Kevin Spacey would sign up for an obvious dud such as this one – it’s not like he’s a struggling actor right now, as House of Cards can attest – but he’s not completely sleepwalking through this. Yeah, some of the lines he recorded in post to provide voiceover for the cat can sound like he’s utterly bored, but when he’s actually a person he’s at least trying to be entertaining. Now Christopher Walken, on the other hand, we can see exactly why he would sign up to play the part of a weird, slightly off-putting store owner who’s responsible for this whole predicament. It’s basically just a riff on his part in Click, and on that note it’s sad when the Adam Sandler movie in this case is actually more entertaining than the one with Kevin Spacey as a talking cat. Everyone else either fails to register (Jennifer Garner is just there, really), or gives a performance that’s far too good for a film like this, like Robbie Amell as Spacey’s son who plays a major part in the climax which needs to be seen to be believed, it’s that horrendously put together.

What else do you want from us? Nine Lives sucks, there’s far too many reasons why it sucks, so don’t waste your money on this.  It’s an utter cat-tastrophe (you may groan at that, but it’s funnier than the entire movie altogether).

Nine Lives is an absolute litter box of a film, with its unbelievably lazy script and lazier direction reminding us all why talking cat movies such as this aren’t around anymore, and why we as a society are better off for it.