Nightbooks (Review) – Introducing Kids To The World Of Horror Storytelling 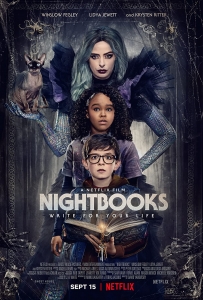 BASICALLY…: A young boy (Fegley) is imprisoned by an evil witch (Ritter) in her New York apartment…

So far this year, we’ve seen the release of two family-friendly movies about spooky witches – the first being Studio Ghibli’s CG-animated Earwig and the Witch, and the second is Netflix’s live-action outing Nightbooks – and somehow, the latter has turned out to be far more creative, interesting, and entertaining than the one made by an animation giant.

Nightbooks, which comes from director David Yarovesky (of the twisted Superman origin Brightburn) and producer Sam Raimi, is a horror film intended for a much younger audience, which alone is cool since it gives kids a chance to be properly scared without feeling like they’re being talked down to or pandered towards. For adults, although it’s obviously not delivering the same kind of intense thrills as an entry in the Halloween or A Nightmare On Elm Street series (though they’re still on the film’s mind, especially since the main character has a poster for the latter on his wall), it’s still an enjoyably dark and campy thrill ride that you honestly don’t get in a lot of family movies nowadays.

The film first introduces us to Alex (Winslow Fegley), a young boy living in a New York apartment block, and who has a true fascination for writing horror stories, as he’s preparing to get rid of his “nightbooks” – journals in which he writes his stories – during an emotional breakdown. However, he is quickly captured by an evil young witch named Natacha (Krysten Ritter) and held within her magical apartment, where she orders Alex to tell her a scary story every night if he is to avoid becoming her latest victim. Left to come up with fresh new tales on the fly, Alex soon befriends Yazmin (Lidya Jewett), another child that Natasha has been keeping as her servant, and Natacha’s cat Lenore which has the power to turn invisible, and together they must find a way to escape the witch’s clutches, while also giving her what she wants in terms of scary, unhappy stories.

You can tell that the writers and filmmakers were heavily inspired by the kind of dark fantasy family movies of the 80s and 90s for Nightbooks, with hints of Beetlejuice, Casper, The NeverEnding Story and Labyrinth all littered throughout. There is real whimsy in the sets – from the mundane apartment we spend most of our time in, to a giant cobweb-filled library, to an ultraviolet garden with strange plants and skeleton-faced creatures – and a real passion for the dark and sometimes intense moments that our main characters have to face. Yarovesky benefits from producer Raimi’s influence, since the iconic horror filmmaker’s fingerprints can be felt throughout with some of its over-the-top imagery and exaggerated, borderline campy performances; Krysten Ritter is especially having fun as a menacing villain who seems to have come from the same universe as Raimi’s Evil Dead 2.

Young children might certainly be intimidated and spooked by the stuff that they see in Nightbooks, and that’s exactly the point. It serves as a decent gateway for children to get more interested in horror storytelling, introducing them to basic (but effective for the age group) jump-scares and ideas about what makes a genuinely scary story, through a young and relatable protagonist who clearly adores this genre despite his repeated insistence that he’s done with it. You can easily watch this with your kids and get enjoyment out of their reactions to the intense imagery, just as you perhaps once had to films like Gremlins or Poltergeist, which again is the exact range that Nightbooks is clearly aiming for, and mostly succeeds.

Whether it’s being creeped out by shadowy figures, or wincing as an invisible cat (the film’s best character, incidentally) craps onto a sandwich, there’s plenty to enjoy about Nightbooks, but for children it’s a viable and even important introduction to the classic horror storytelling format.

Nightbooks is a fun fantasy-horror that serves as a strong introduction for horror storytelling upon younger viewers, while adults can get a kick out of some of the dark and intense imagery that is rare amongst modern-day family movies.

Nightbooks is now available on Netflix.