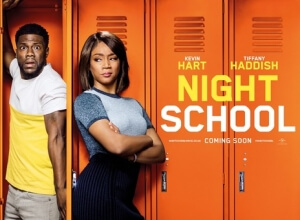 BASICALLY…: Teddy (Hart) is forced to return to high school to obtain his GED, and clashes frequently with his no-nonsense teacher Carrie (Haddish)…

Apparently, making a comedy set in educational environments is the most difficult thing to do, because between both Life of the Party and now Night School, not a single comedy filmmaker can be able to make one to save their own skin.

The latter’s director, Malcolm D. Lee who is just coming off last year’s sleeper hit Girls Trip, now follows up that film with something that’s shockingly inferior, a laugh-less slog that takes the worst aspects of today’s comedies – an overlong running time, never-ending scenes of ad-libbing, Rob Riggle, the list goes on – and puts them all into a movie that wastes its potential and saddles its talented comedic cast with DOA material that wouldn’t pass a basic English class.

This isn’t Girls Trip Malcolm D. Lee we’re dealing with here; this is Scary Movie 5 Malcolm D. Lee, and while this movie isn’t quite as repugnant as that one, it should still give you an indication of what levels of quality you can expect from this film.

The plot sees Kevin Hart – also a producer and one of the six (!) credited writers on the film – play Teddy, who dropped out of high school and is now a top salesman at a local barbeque store, but when fiery circumstances lose him his job, he is forced to return to school and obtain his GED if he is to secure a new sales position. The night school program he attends, which he does behind the back of his more successful fiancé (Megalyn Echikunwoke), is run by no-nonsense teacher Carrie (Tiffany Haddish, who reunites with D. Lee after her breakout performance in Girls Trip), who tries and gets her numerous students, also including Rob Riggle, Romany Malco, Mary Lynn Rajskub among a few others, to work as hard as they can to achieve their GED, even if that means one or two unorthodox methods in Teddy’s case.

You see, it’s made very clear early on that Teddy has some kind of learning disability, which is later confirmed to be dyslexia as well as a couple of other diagnoses including lack of concentration, and during a later montage it’s Haddish’s idea to help him overcome his difficulties not through actual academic progress, but by beating the shit out of him in an MMA ring until he gives the right answers. That’s the kind of dignity you can expect this film to give people who actually do struggle in learning environments because of their numerous problems, and as someone who did struggle in school with my own learning disabilities, this was the point where I felt this movie could suck a whole bag of dicks for all I cared. When you really think about it, the message seems to be that if you or someone you know finds it immensely hard to concentrate in class or struggle to even understand the question, just beat it out of them until they instinctively come up with the answer, because CLEARLY that’s the best way for them to learn and not through extra support in the class or anything like that; as bad as this movie already was for me, and I’ll get to why exactly in a little bit, I felt this was what really helped it slip more into offensive territory that never became funny and just felt rather mean, even for a stupid comedy like this.

Just like with Life of the Party, this movie somehow succeeds in making genuinely talented comedic actors look and feel absolutely lost in material that they even had a hand in creating. Kevin Hart has been in plenty of bad comedies before this one, but his writing and producing credits here gives him a bit more of the blame this time around. It kind of makes you wonder how such a gifted comedic performer like Kevin Hart could come up with material that’s so beneath him, and before you assign blame to one or all of the five other credited writers on this film – because THAT’S the sign of a good comedy, when six people wrote the script to it! – remember that he was also a producer on this which means that he signed off on what they ended up putting in the movie, so scenes where he and Tiffany Haddish will trade long improvised quips with each other before using comebacks that aren’t even in English, or where the movie will just stop dead so that an actor can perform a stand-up routine in the middle of an unrelated scene, can all be rooted towards Hart on this one. The material undermines every person there, from Hart to Haddish to Riggle to Taran Killam who gets one or two of the only light chuckles in the movie as the school’s odd principal, and it’s a shame because they are all really good comedians who just happen to be in this terrible comedy.

In fairness, not all of the blame can be rested on Hart; this is a terribly directed and edited movie, with D. Lee just letting his actors off the leash without restraint, resulting in scenes that go on for so long that to say they could be trimmed down would be putting it mildly. There’s even a scene where they just reuse a stock clip of Romany Malco saying the exact same thing in the exact same manner three times (I counted), in reaction to three very different scenarios, because God forbid a movie using different takes without the same dialogue. They made time for all the ad-libbing and reuse of footage, but apparently none was left over for developing a story with characters you actually cared about or jokes that could actually make you laugh.

While I’d rather sit through this again than Life of the Party, that’s still not a recommendation; Night School is an agonising comedy to sit through, one that Hart really needs to see the teacher after class about.

Night School squanders any comedic potential with a slew of unfunny jokes it forces its talented comedic cast to perform, while also being terribly edited and directed, and also rather insensitive when it comes to tackling learning disabilities.