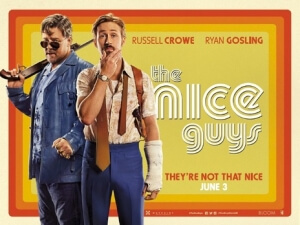 BASICALLY…: Enforcer Jackson Healy (Crowe) and PI Holland March (Gosling) team up to investigate the disappearance of a young woman (Qualley) which in turn uncovers a much bigger consipiracy…

Chalk and cheese duos – i.e. two polar opposites forced to come together on a wild adventure – don’t get much better than any created by Shane Black, the man behind Riggs and Murtaugh from the Lethal Weapon movies, Joe and Jimmy from The Last Boy Scout, Harry and Gay Perry from Kiss Kiss Bang Bang, and now Jackson Healy and Holland March from his latest film as writer-director – and third overall – The Nice Guys.

A wild and wildly entertaining buddy action-comedy set amongst a late-70s Los Angeles backdrop (billboards for the likes of Jaws 2 and Airport ’77 roam the streets of Hollywood), Russell Crowe’s Healy is an enforcer hired to beat the living hell out of certain people when paid up front. One such person he is hired to assault is Ryan Gosling’s March, a Private Investigator hot on the trail of a missing young woman named Amelia (Margaret Qualley), who is the one who pays Healy for his thuggish services. However, when Amelia goes missing and someone is taking down known cast and crew members of an “experimental” pornographic film, Healy comes to March and the both of them, along with March’s young daughter Holly (Angourie Rice), conspire to solve the case together and uncover a much larger conspiracy in the process.

Thus begins a Shane Black movie that is undeniably Shane Black, and it’s all the better for it. His sharp and witty dialogue is completely dominant all throughout, and because he is also directing as well as writing he is able to get his actors to say these lines exactly how he probably hears them in his head. When Healy and March are swapping lines back and forth with each other, you can almost hear Black’s several inner monologues going on simultaneously right there on the screen, but luckily he also makes sure that the characters are interesting and likable enough to keep the audience’s interest, ensuring that it’s not all a bunch of quippy lines and nothing much else in terms of substance. These are all characters you desperately want to know more about, whether it be more of their personal histories or what they may go on to do in the future, and because they’re developed so strongly with their own mini-arcs and scenes establishing their unique quirks that don’t feel too forced, you find yourself caring about them and whether or not they’ll make it out of this mess alive. When certain characters DO – mild spoiler alert – get the axe, you’re actually sad about it instead of being passive and wanting to move on to the next scene, which is the sign of a good character that you’re actually invested in.

Black also has a great cast of actors who work their magic to bring these characters to life, and make them work on-screen as opposed to literally just working on paper. It goes without saying that Crowe and Gosling have great chemistry with each other, and they are extremely entertaining when they are working together in any way whether it’s on the case or in combat with several assailants. Gosling, however, fares stronger than Crowe by comparison in terms of actual performance; while Crowe is certainly good, he’s more or less the straight man while Gosling gets to do a lot of physical humour from rolling down a hill to trying to hold a bathroom door open while pointing a gun and fishing around for his dropped cigarette. He’s also, honestly, playing a stronger character than Crowe is; March is a pretty pathetic individual, abusing his job protocol just to earn more money from his worried clients, and spending his free time fuelling his alcoholism while his thirteen-year-old daughter is trying to hold everything together. But at his heart, he’s still a guy who cares deeply for his offspring and wants to have her grow up in a world where she’s safe and free from harm; he just happens to adopt a pseudo-hedonistic lifestyle just to get there. His relationship with Holly, played in what has to be a career-making performance by young Australian actress Rice, is one of the strongest elements of the film, and it’s also pretty cool to see a child character actually serve as an active participant instead of being a mere pawn to be kidnapped the entire time. She’s a smart kid, and the film rewards her character for that, which is very nice of them.

Gosling gets a lot of the laughs too, which is saying something because it is already a very funny film. The humour is, in keeping with Black’s traditions, rather dark at times – random people in the background are shot during shootouts involving main characters, the dumping of a dead body doesn’t end too well, and some of the deaths are so over-the-top gruesome that it’s impossible not to at least chuckle when you see it on-screen – but most of it does come more from the interactions of these characters, as well as Gosling’s own physical performance that has him drunk and high-pitched screaming for most of it. There’s a lot of material that Black incorporates that gets a good amount of laughs every time, from odd moments of surrealism such as an imagined conversation with an oversized bee voiced by Hannibal Buress, to the vivid and campy nature of the pornography industry in the 1970s, best represented at a colourful house party that has golden-painted naked women being mistaken for tables and other women swimming around in mermaid costumes, leading to one of the funniest lines in the movie which we won’t give away here.

Like that mermaid line, a lot of the stuff in The Nice Guys deserves to be experienced in the cinema with fresh eyes (and ears), at least as proof that Shane Black is perhaps the cinematic master of chalk and cheese duos in films.

The Nice Guys is an extremely fun and entertaining buddy action-comedy that sees writer-director Shane Black do what he does best with a glorious 70s feel to it, including good and well-developed characters played by strong actors who get to deliver Black’s reliably witty and funny script of quips and insults with as much passion as the man himself has.