News of the World (Review) – A Pleasantly Old-Fashioned Western

News of the World (Review) – A Pleasantly Old-Fashioned Western 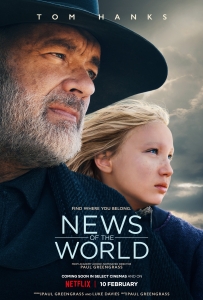 BASICALLY…: In the Old West, a travelling news-reader (Hanks) becomes the unlikely guardian of an orphaned young girl (Zengel) who must be returned to her family…

The last time that Tom Hanks teamed with director Paul Greengrass, it was to face off against some deadly Somali pirates in Captain Phillips. While there aren’t any pirates in sight during their second team-up, the pleasantly old-fashioned Western News of the World, Hanks is instead placed in the care of something that’s potentially even more dangerous: the out-of-control young kid from System Crasher.

Hanks and his young co-star Helena Zengel, the breakout star of last year’s German drama, are key to Greengrass’s film working as well as it does, because without them this would have likely been one of those films that certainly looked grand and epic, but really lacked that big old beating heart at the centre. Thankfully, both Hanks and Zengel provide that much-needed heart to balance out its gorgeous visuals.

Hanks plays Captain Jefferson Kyle Kidd, a Civil War veteran who’s now travelling from town to town in the post-war Texas landscapes, making a living by reading aloud the latest news articles in front of a live audience (essentially, he’s one of the first news anchors). During one of his travels, he comes across a young girl named Johanna (Zengel), a German waif who was raised by a Kiowa tribe after her family was slaughtered, and as a result only appears to speak in the Natives’ language. Kidd is entrusted to return Johanna to her biological relatives across the state, and as they travel together through some unspeakable peril, the two eventually form a mutual bond that guides them across the Old West.

At first glance, News of the World does not look or feel like your typical Paul Greengrass movie; the trademark shaky-cam is virtually a no-show, while any political themes or intense action are largely side-lined. Instead, this is Paul Greengrass by way of John Ford, and the filmmaker takes full advantage of stepping foot into a completely different genre with the assistance of Dariusz Wolski’s beautiful, sweeping cinematography that captures everything from the sun-drenched plains to the midst of a giant dust storm with vibrant, raw energy. However, the director hasn’t lost his ability to deliver some surprisingly intense sequences, particularly an extended pursuit by a creepy paedophile gang wherein the filmmaker is able to flex his appetite for suspenseful action (and the absence of shaky-cam here makes all the difference, for viewers can actually see things happen without getting dizzy). Though this is by far his most conventional film to date, Greengrass shows here that even with a much more straightforward script (more on that in a bit), he is still a director who can get some thoughtful and empathetic drama out of a few familiar structures.

Key to the film’s great level of empathy, once again, is the central pairing of Hanks and Zengel. Hanks, the instantly-likeable movie star that he is, brings solid warmth and wisdom to his character, who we can see has clearly been through a lot over the years but still strives to put on a good show for his audience. Meanwhile, Zengel is bound to receive more international attention from her stunning turn here, who even with a very limited vocabulary can still get across so much just from her wide-eyed expressions and visceral body language alone. It’s nice seeing how they work off of one another, learning new phrases and ways of life, and being legitimately helpful in times of crisis, but it’s primarily because of the actors’ chemistry and likeability that we are so thrilled by their adventures together, because truth be told these are not the most complexly written characters to ever surface in a Western movie.

That segues into how, despite being a good movie overall, its rather light script just about stops it from being a great one. The structure of a lone figure in the Old West being entrusted a young ward to protect and deliver is a very familiar one to fans of Western cinema – hell, you could even say it shares certain plot aspects with The Mandalorian, which itself takes heavy storytelling cues from Western cinema and television; just put a jetpack suit and T-shaped visor on Hanks, and he’s essentially transporting Zengel’s Baby Yoda across the region to take them home – and here there aren’t a lot of surprises as to how things turn out. The script itself can often become rather episodic, going from one major scenario to another as though they were condensed episodes of a TV series put into a film instead, although the movie has enough going for it like its broad cinematography and likeable leads that they just about work in this format. There are also a couple of notable instances where some questionable CGI will step in during some major set pieces, whether it’s a dust storm or a giant boulder, which momentarily take you out of the thrills that are actually present in front of the camera.

For a movie that is titled News of the World, the news itself takes up surprisingly little screen time, though to be fair watching someone simply deliver the news for two hours would be pretty boring, even if it’s someone like Tom Hanks delivering it. There are some interesting parallels to how news was spread back then and how it is now, as we see how ill-informed some people can be until they’ve heard of what’s going on in the world or even their own country, slightly similar to how we now rely on news coverage via television, the internet or social media to stay up to date on a certain developing news story or a long-form piece of journalism.

Mostly, though, this is simply Paul Greengrass wanting to temporarily break away from his comfort zone to make something more pleasant and crowd-pleasing, and while News of the World has a few notable flaws there’s still plenty left to enjoy about his first proper Western, least of all the presence of Tom Hanks.

News of the World is a pleasantly old-fashioned Western from director Paul Greengrass who incorporates some gorgeous cinematography and two likeable lead turns by Tom Hanks and Helena Zengel to deliver some well-made and empathetic drama, although a familiar and often episodic script sometimes trips up the pace.

News of the World is now available on Netflix.