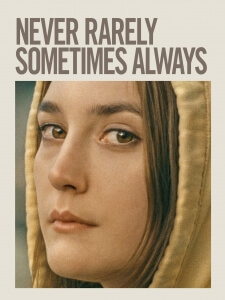 BASICALLY…: After mysteriously falling pregnant, Autumn (Flanigan) heads to New York with her cousin and best friend Sylar (Ryder) to get it taken care of…

The biggest tragedy of Never Rarely Sometimes Always is its unfortunate timing. After debuting to unanimous critical praise at the Sundance and Berlin film festivals, even winning special jury prizes at both, the film received a limited theatrical release in the United States last month… right around the time when cinemas started closing due to the COVID-19 outbreak. As a result, its current box office stands at a measly $16,565, and this week it’s gone straight to on-demand across America – or so we thought, because here in the UK, it turns out that the film has been quietly dumped onto VOD services at the same time as in the States, meaning that not only has the film effectively been denied a theatrical run in Britain but the lack of fanfare and advertising for it means that nobody will probably even be aware that one of the year’s most acclaimed films so far is available right now.

Of course, there’s no way the film could be released theatrically right now, but even still a film that is about as great as it’s been made out to be – in fact, it is one of the better movies I’ve seen so far this year – deserves to have far more attention thrown its way.

The film, written and directed by Eliza Hittman, is about 17-year-old Autumn (Sidney Flanigan), who lives in a small Pennsylvania town. She soon discovers that she is pregnant – the identity of the father is unknown – and, deciding that she is not ready to be a mother, opts to get an abortion. However, since the local facilities require her to get the consent of a parent – and seeing how unsupportive both her mother and father appear to be in early scenes, it doesn’t seem likely she’d get it – she and her cousin Skylar (Talia Ryder) hop on a coach to New York where the abortion requirements are a little more relaxed.

The way in which Hittman presents her film is very naturalistic, almost documentarian, with performances and camerawork that call to mind other social dramas like Ken Loach’s Cathy Come Home or Andrea Arnold’s Fish Tank in terms of how utterly real and believable they feel. This isn’t the kind of film where a big dramatic revelation suddenly happens to spice up the tension; Hittman deliberately restrains the drama and keeps things fairly straightforward, which to some might seem uneventful but is actually a lot more innovative and telling than it may seem at face value. Simple scenes such as going through a lengthy pre-operation questionnaire can be gut-wrenching because of the carefully chosen words of dialogue and the precise nature of the performances (Flanigan, in particular, is magnificent in scenes like this as she relays some pretty rough emotions through the mere expressions on her face and the quickest inflictions of her eyes), which open up a realm of feelings you wouldn’t have thought possible from a mundane situation such as that and others.

Hittman does extremely well with capturing not just the natural relationship between the two main characters, but how the world they live in can feel, at times, incredibly testing and even dangerous, especially to two young vulnerable girls such as themselves. In the very first scene, where Autumn is performing in what seems like a 50s homage revue, she is heckled as a “slut” by a male member of the audience, something that her father later calls the family dog as though it’s a pet name, while the manager at the store where she and Skylar work kisses their hands whenever they hand money to him; even when they make it to New York they keep running into red flags around every corner, from a young guy who keeps goading them to come with him downtown, to a drunk man on the subway touching himself as he stares at them. The filmmaker hits several tender spots when discussing commonplace misogyny and unwanted harassment, which makes the film feel a lot more tense because you’re never quite sure if one encounter with a guy is going to end up seriously going south, no matter how harmless he appears to be at first. The film leaves you on a knife’s edge throughout, because the direction is so good that even when things turn out okay in the end you are still so unnerved by the whole experience to a point where you feel completely overwhelmed with emotion.

As for the hot button topic of abortion which this film centres completely around, the film never gets political about it – the closest it gets to such a thing is when a local doctor forces Autumn to watch an anti-abortion propaganda film, and when the two girls pass a church congregation on their way to the clinic in New York – but instead depicts it as a mere service that the main character aims to achieve, as is her right as a young woman in the position she’s in. Whether or not you are pro-choice, such a decision should be and needs to be respected, which this movie manages to highlight far greater than some of the more right-wing anti-abortion films out there, which seek to further their own dangerous and irresponsible ideals without once considering the needs and wants of the individual; ironically, this movie comes off as far more Christian in its approach to treating people in this situation with kindness, than some of the actual Christian-based movies with this topic.

There’s a calm, stoic nature to this movie that admirably makes no shortcuts towards its main points, nor does it stray away from the realities that young women have to face day to day in society. It’s an impressively layered movie that feels urgent in the ongoing battle for gender equality and against sexual harassment, but doesn’t feel the need to stand on a soapbox and shout in the street about it; instead, it just goes about its business and deals with the situation when confronted, while never losing sight of what kind of things it wanted to talk about in the first place. This really is one of the best movies that’s been released so far this year, and quite honestly it’s shameful that it’s been dumped like it has onto our shores; yes, it’s very difficult to release a film in cinemas right now (mainly because they’re all closed), but that doesn’t mean you can just dump whatever you like onto VOD services without some sort of fanfare, which this movie needs now more than ever.

Never Rarely Sometimes Always is an astonishing and quietly emotional drama which tackles heavy issues such as abortion and commonplace misogyny under naturalistic direction by Eliza Hittman, who achieves a level of restraint and empathy through some very real performances – particularly by Sidney Flanigan – and some often intense sequences which leave you on an emotional edge. It is one of the best films of the year; do no miss it on VOD if you have the chance.