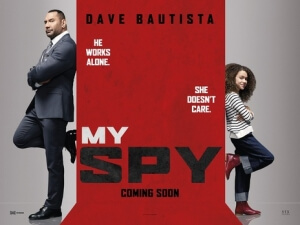 BASICALLY…: When a hardened CIA operative (Bautista) is sent to spy on a family, he finds himself at the mercy of a precocious 9-year-old (Coleman)…

The film industry is very much in a tailspin right now, thanks to that good ol’ COVID-19. The current pandemic has forced the postponement of several highly-anticipated movies, from No Time To Die to Mulan (even the heavily-delayed The New Mutants can’t catch a break, having now been removed from its April release date two years after first being scheduled), and caused many high-profile festivals, events and productions to be shut down or cancelled entirely. Of course, it’s all for a good reason, as nobody wants to pass the virus on to more people than it needs to be, but unfortunately it does mean far fewer movies coming out over the next few months, which for someone in my line of work has to be the most unfortunate thing of all (aside from, obviously, getting the virus itself).

The reason I bring up the whole coronavirus thing is that despite the severity of it, and despite the numerous other movies making the right decision by holding off their release for the time being, they still found time to release My Spy, a movie that has such few laughs and even less charm that it would make anyone want to willingly go out and catch that virus. Why? Because isolating yourself in your home for seven days is the far better option.

It’s the kind of movie you’ve seen so many times, ones where a certified tough guy like Arnold Schwarzenegger or Dwayne Johnson or John Cena puts aside their tough action hero persona to act opposite a young child (or children), in a family-orientated flick with obvious slapstick, embarrassing body humour, and learning the true meaning of fatherhood or some crap. The tough guy in this scenario is Dave Bautista, as CIA operative J.J. who – you guessed it – has a tough, gruff personality who doesn’t like to work with others. After a sting goes awry, he is reassigned to Chicago where he is to spy on a single mother (Parisa Fitz-Henley) who was once connected to a dangerous criminal – where her nine-year-old daughter Sophie (Chloe Coleman) very quickly catches onto him, and threatens to expose him if he doesn’t give in to her demands, among them teaching her how to be a spy. Soon, the two form a bond, and he learns to let loose, and all that claptrap.

This is the kind of stock family movie with the same recycled plot that would have been right at home in the mid-to-late 90s, and even then it wouldn’t have stood out that much. It’s such a predictable script with thinly defined characters and painfully obvious clichés that you can tell every single beat it’s about to take before it even decides to take that route, and it doesn’t even attempt to do anything different with a single one of them. Because of that, not only are you sitting there not really laughing at any of the jokes or slapstick, because director Peter Segal can’t find a way to make this stale material work for even a minor chuckle, but you are also extremely bored since you know exactly where it’s going to go, and how.

It also feels like something that nobody in this movie really wanted to make, which makes me think this is why it ended up being delayed so many times (it was originally supposed to come out last August, before moving to January of this year – a more appropriate timeslot for this movie – before then plumping itself right in the middle of March, unless you’re in the States in which case it’s just been pushed back to April because of – you guessed correctly – coronavirus), because maybe they were trying to add a bit more life to it, with little to no avail. Segal directs this movie on autopilot, contributing nothing to the overall style or pace, and instead making sure his actors just say their lines in front of a camera before moving on to the next scene. That is also perhaps why even the performances feel so glum; for someone who is not only the headlining star but is also credited as a producer, Dave Bautista does not act like he wants to be on set, with his apparent disinterest really seeping into some of his line deliveries that can be wildly distracting; and while Chloe Coleman has her moments, she is largely directed to be very monotone and dry, with a blank facial expression that calls to mind some of Macauley Culkin’s later child performances but also the actions of a robot disguised as a child that hasn’t quite figured out how to act completely human yet (though again, I put that more on the director and not the actress herself).

It’s not hugely funny, it’s plagued with endless clichés, and contains very little charm because it can never shake off how much it is a cynical ploy to keep alive this trend of action movie stars acting opposite kids, a theme which was nearly killed for good last year with Playing With Fire (the only reason this movie isn’t nearly as bad as that is because at least there is no such scene where Dave Bautista has poop exploded onto his face while attempting to change a nappy). For all I know, though, this movie might become a small hit because of the sheer lack of other new options at the moment in cinemas, and if it does then I can understand why; families need something mild and silly to take their kids to in order to get away from the harrowing news stories circulating right now, and with Mulan, Peter Rabbit 2 and The Secret Garden no longer coming out soon this is really the best option you could ask for.

Unless, of course, you’d rather take your kid to see Sonic The Hedgehog for a second time, and again I wouldn’t fault you because it’s at least more entertaining than this film.

My Spy is a dull and often lazy family comedy that recycles heavily from other films with similar plots, rendering it entirely unoriginal and thus uninteresting, with production values and performances that make it feel like even the filmmakers didn’t really want to be making this film. It’s not worth taking the risk against coronavirus to go and seek out.

Want to decide what the movie’s like for yourself?
Check out My Spy showtimes in London
via