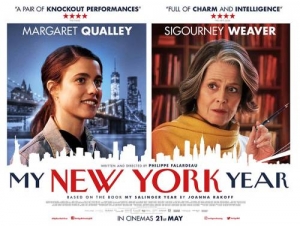 Before we get to the actual movie, I have to say that the title for this film kind of bothers me. Although it was released as My Salinger Year (named after Joanna Rakoff’s memoir of the same name) in most other countries, here in the UK it’s being distributed under the much simpler title My New York Year, as though British audiences who actively seek out a movie like this have no idea who J.D. Salinger – who’s actually rather integral to the plot – is. I’d expect that kind of dumbing down of a title from America, but they were at least smart enough to release it under its original title there (where, in fairness, Salinger is a slightly bigger draw, but even still did they really think Brits wouldn’t get the reference?).

I suppose My New York Year is as good an alternate title as they could have come up with, since it does primarily take place in the Big Apple, and a fair amount of the main character’s journey has to do with her accepting the city as her new cultural home, but it still seems like a small oversight in the distributors’ faith in their UK audience. Nonetheless, My New York Year – as I suppose I must now refer to it as – is a nice little slice-of-life film, albeit not especially challenging or even that eventful, but grounded by a couple of sweet central performances.

Set in the mid-1990s, young student Joanna (Margaret Qualley) decides she wants to drop out of college back in California and move to New York to become a writer, leaving her boyfriend Karl (Hamza Haq) in the process. She manages to secure a job at a well-respected literary agency, which represents several classic authors from Agatha Christie to Judy Blume to, most importantly, J.D. Salinger himself. Part of Joanna’s secretarial job, as overseen by her boss Margaret (Sigourney Weaver), is to shred all of Salinger’s fan mail – since the reclusive author does not receive it or respond personally – and reply with a generic letter stating that the Catcher in the Rye author does not wish to be contacted. However, Joanna begins to take it upon herself to write her own responses to some of the countless fan letters, sparking her desire to write and forge her own career in such a field.

Those expecting some kind of book-focused clone of The Devil Wears Prada might be a little let-down, because this movie (quite rightly) contains almost zero of the cattiness or high-strung personalities of that film. Even the Miranda Priestly-type boss isn’t really mean by any stretch of the imagination; she’s certainly eccentric since she prefers to stick to typewriters rather than bring in desktop computers (there is a funny scene where Sigourney Weaver is trying to lay the terms when she is forced to introduce one in the office), but she seems level-headed enough to be human while still laying some tough love upon her clients and employees, like a competent boss often tends to do. It’s a completely separate type of story about a young woman thrust into a high-demanding industry as overseen by a somewhat ruthless boss, and if you’re still really craving Devil Wears Prada-style antics, then perhaps wait until Cruella next week which looks like that film had a baby with Joker (P.S. I am rather looking forward to that one, despite what that metaphor might imply).

Instead, this film tends to meander quite a bit, drifting in and out of one scene after another, all loosely tied together by a gentle arc for the main character to flex her writing muscles. The whole thing feels like you’re reading a very light book, one that’s thin on complexity but full of little pleasantries, which director Philippe Falardeau heavily leans into with a gentle style which occasionally dabbles in meta-physical and even surreal territory (one nice touch sees personifications of the Salinger fan letters start communicating with Joanna directly, while there is a spontaneous choreographed dance-hall number much later on). Areas of Joanna’s early experiences within the New York culture scene are mostly shown through her unsatisfactory relationship with a pretentious, self-involved socialist writer played by Douglas Booth – nailing the Trotsky beard and John Lennon glasses that most insufferable hipsters would kill for – while the majority of her arc has to do with her working at this agency, where she sometimes even has the opportunity to briefly converse with Salinger himself over the phone. However, Falardeau does often have fun with the mundane and sometimes darkly funny aspects of her job, including one (intentionally) painful edit from a letter by a woman pleading for permission to use part of Salinger’s story to honour the memory of her cancer-stricken daughter, to seeing the letter grind its way through the shredder.

Aside from those types of moments, I really do mean it when I say that My New York Year is a very light movie, one that doesn’t exactly have a full-on plot but is more just showing this young person’s coming-of-age arc as she comes into her own as a writer. It might try the patience of those expecting a little more here, because it does meander in such a twee manner that might be hard for some to digest, but there are benefits to sticking it out with this movie, particularly the strong performances from Margaret Qualley – who really does have the bright-eyed charm and sweetness of her real-life mother Andie MacDowell – and Sigourney Weaver, who’s always had that innate ability to be tough as nails but also somehow gentle at the same time. They’re good enough to keep the movie’s feet planted to the ground, as well as carry it through numerous scenes where it may appear not much is actually going on.

I wouldn’t say it’s an especially great movie, but it is good for a relaxing evening with a cup of tea in hand and the TV remote in another (or some popcorn, since this is playing in cinemas). Some will find it a test of their patience since it really is that light of a movie, but My New York Year does have some smart charms to it, even if the title change doesn’t exactly spell faith in UK moviegoers’ intelligence.

My New York Year is a sweet, if extremely light, coming-of-age drama that makes up for its lack of complexity and thin, meandering plot with a sense of low-level charm and some strong central performances from Margaret Qualley and Sigourney Weaver.

My New York Year is now showing in cinemas nationwide – find a screening near you right here!