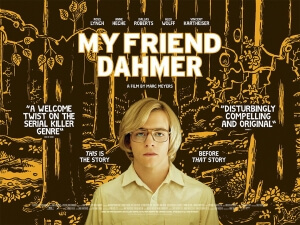 BASICALLY…: In the 1970s, a teenage Jeffrey Dahmer (Lynch) struggles to fit in during high school…

Jeffrey Dahmer was one of the most notorious serial killers in history, who over the course of thirteen years drugged, raped and killed seventeen men, and also dabbled in several acts of necrophilia and cannibalism.

He is not the sort of person you would want to see a high school movie about, but My Friend Dahmer exists nonetheless, although it is a chilling and sorrowful account of the killer’s early years told tastefully and with a sense of genuine unease as you see everything that turned him into what he became.

It is based on the graphic novel by John “Derf” Backderf, who actually attended high school in 1978 alongside Dahmer. We are first introduced to the latter (played by Ross Lynch) as he’s ogling some roadkill as well as the handsome male jogger passing by his school bus. Already, the seeds for his future endeavours are planted; he’s developed an unhealthy habit of storing roadkill in jars filled with acid, he’s having disturbing fantasies about cuddling up next to corpses, and he’s a social shut-in with an unstable family and barely any friends at school to call his own. That is, until Derf (Alex Wolff) and his friends take notice of Dahmer’s impressions of a local decorator with cerebral palsy, and forms a Dahmer “fan club” dedicated to exploiting his strange public outbursts for their own entertainment. Dahmer goes along with it all, largely because he’s been encouraged by his father to get out more and make new friends, but soon he turns to alcoholism and more disturbing activities like killing wild animals, all indicators for the man he is destined to become.

The film isn’t so much interested in Dahmer’s later actions that would land him in jail for the rest of his life (where he would be killed by another inmate in 1994), but more about his troubled high school experience, where he struggled to find legitimate connections and couldn’t find a reasonable outlet to vent his teenage angst. It was a ballsy move on the part of the filmmaker, writer-director Marc Meyers in his film debut, to make this character somewhat sympathetic as he goes through a series of rough ordeals, from being exploited by his so-called friends, to witnessing first-hand the disintegration of his parents’ marriage, largely brought about by his mother’s increasingly erratic and mentally unstable behaviour, and even humanises the character in a way where you can almost understand his frustrations, as well as the ways in which he acts out. It’s almost kind of sad to see this young man go through this emotional journey of being exploited and without true friends to call his own, and one wonders if it was this kind of mistreatment from his peers that led to him becoming more and more deranged and eventually murderous – probably not, but that’s what the movie is certainly suggesting, in a very collected and matter-of-fact kind of way.

Lynch makes for an eerie Dahmer, drenched in awful 70s clothing and an even worse hairstyle, and bringing a calmed sense of confusion and frustration to the character that humanises him more than probably any other film about the killer has yet done. However, Lynch doesn’t let him entirely off the hook, as he constantly looks as though he’s about to strike someone at any given moment, and part of the tension within his performance is wondering if and when he is going to make his first kill prematurely, which he teases masterfully thanks to an extremely creepy and unnerving vibe he manages to get across. He easily carries this movie and is endlessly compelling to watch, which is way more than I can say for Lynch’s previous big-screen performance in, of all things, Status Update; in fact, I would go so far as to say that his performance and character in this film is way more likeable and appealing than the entitled douchebag he played in that film, and he’s playing a notorious serial killer in this one.

It’s very much a character study of this teenage version of Dahmer, and it attempts to examine all the things that happened in his adolescence that could have very well led to his disturbing activities later in life. Because of that, the film tends to be a slow-burn, taking its sweet time with fleshing out as much material as possible, which for the most part is fine but there are parts where it does tend to drag and make the running time feel a lot longer than it is. There are whole sections of the movie that could easily be cut, or at the very least trimmed, that aren’t entirely necessary to the overall direction that this particular story is heading, such as a sequence where Dahmer and his schoolmates go on a field trip to Washington D.C., and through an unbelievable stroke of luck manage to run into Vice-President Walter Mondale after bluffing their way into the White House. It’s debatable whether or not that unlikely meeting ever happened, or at least it did according to original author Backderf (who by the way has real guts to allow himself to be portrayed as an exploitative and inconsiderate character in this film), but in the film it just grinds things to a half momentarily, and you wonder if that and other parts of the film were really necessary to keep in.

This isn’t going to be a film that wins over everybody (and why should it? It’s a movie about a teenager who grows up to become a guy that has sex with corpses!), but it does offer an interesting and unsettling look into the life of an extremely dangerous individual, and the missteps in his early development that led to him becoming the man we all know him to be today – and if anything, it proves that Ross Lynch can indeed act, which makes you wonder what the hell he was thinking with Status Update all the more.

My Friend Dahmer offers a chilling and intriguing glimpse into the early life of the notorious serial killer, brought to life via an eerie performance by Ross Lynch who embodies the character with a sense of unease and even sympathy.